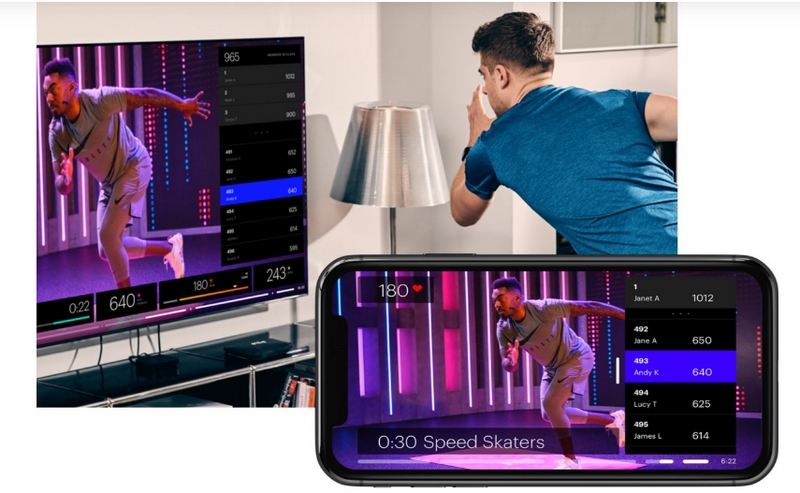 This article titled “The rise of digital fitness: can the new wave of high-intensity home workouts replace the gym?” was written by Sirin Kale, for The Guardian on Monday 19th August 2019 09.00 UTC

Chessie King whoops, flipping her ponytail out of her face. Her partner, Mathew Lewis-Carter, grunts with the exertion, sweat pouring from his brow. Five cameras pick up every move, as they lunge and thrust in front of a pulsating LED screen at the east London studio where they are filming a high-intensity workout class for at-home fitness pioneers FIIT.

The footage will be broadcast via the FIIT app as a live class. Users will be able to join from the comfort of their own homes. If they choose to wear the heart-rate monitor provided, they can compete with other users on a live leaderboard. There are also classes available on demand, for the less competitive.

FIIT and the other players in the burgeoning “digital fitness” industry are all out for a piece of the UK’s £4.9bn fitness industry, which the market-research group Mintel predicts will grow to £5.3bn by 2023. Their aim? To bring the gym to you, in some cases with hi-tech wearables or equipment, or through guided workouts on your phone.

Since FIIT launched in April 2018, the app has been downloaded by 150,000 users, who have taken a combined 500,000 classes like this one. “Let’s keep the sweat on the floor,” says the production head Mitra Memarzia from the darkened control room, as Lewis-Carter rocks back on his heels, exhaling deeply.

Although the class is only half an hour long, it takes twice as long to record, meaning King and Lewis-Carter – fitness influencers and personal trainers with 633,000 Instagram followers between them – look knackered. But in order to get at-home users through the gruelling routine, the trainers have to project the positivity typically associated with children’s-TV presenters. “Maintain that energy even though you’re tired,” cheers King, legs pumping furiously. “We’re with you!”

Later, at home, I try FIIT for myself. I log in via the app, put on the heart-rate monitor, connect the device to my TV, and move the coffee table into my kitchen – as in many urban homes, space is tight. On the screen, a timer counts down to the 8pm class, led by personal trainers Adrienne Herbert and Alex Crockford. It shows there are 14 other members online. Seeing them congregating in the “digital lobby”, I feel unaccountably nervous. But there’s no time for that: after a warm-up, we launch straight into a high-intensity class.

It wasn’t so long ago that exercising at home was the norm. Jane Fonda defined the genre in the 80s, her tapes introducing women to the joys of aerobic fitness in footless tights. Cindy Crawford followed suit in the 90s, while Davina McCall entered the market more recently. But today’s hi-tech, interactive, at-home workouts are unrecognisable compared with those of the past.

Beyond FIIT, the virtual cycling experts Peloton and Zwift lead users through classes on connected stationary bikes at home. Hydrow does the same with rowing machines. A US startup, Mirror, beams classes into your home on to a $1,500 (£1,250) LCD mirror. In the audio space, Aaptiv puts personal trainers in your headphones, while the popular smartphone app SWEAT: Kayla Itsines Fitness bills itself as “the world’s largest digital gym”, with 35m workouts completed since 2015.

One SWEAT fan is Warwick-based Rebecca Allen, a 21-year-old professional dog-sitter. On the morning we speak, Allen has completed a half-hour workout dressed only in a sports bra and shorts – kit she would never have felt comfortable wearing at her former gym, where she witnessed men taking photos of women squatting without their knowledge. (Allen says she complained to the management, who did nothing.)

“I feel a lot better for using this app than using the gym,” says Allen. “When I went to the gym, I didn’t have a routine, so I wasn’t sure what I was doing. But, with the app, you go up in stages, so you can feel a difference.” The app’s structured, goal-focused workouts help her stick with it; when you complete a goal, confetti cascades down the screen. “Having goals and targets, and being rewarded for successfully achieving them, is a key component of building habits,” says SWEAT’s chief executive, Tobi Pearce.

What would it take to get me back into the gym? For it to be a lot cheaper.”

Another advantage of working out at home is cost. With the exception of premium products such as Peloton (which starts at £1,990 for the bike, plus a monthly membership of £39), most digital fitness products are cheaper than the average monthly gym membership in Europe, which Deloitte and EuropeActive last year estimated at £40.53; the monthly cost of FIIT is £20, while SWEAT is £15.

“What would it take to get me back into the gym?” asks Romer Attenborough, a 28-year-old teacher from Kingston upon Thames. “For it to be a lot cheaper.” Attenborough used to frequent Virgin Active, but felt that the membership – at the time, £110 a month – was too expensive. In 2017, she discovered FitnessBlender, a no-frills YouTube workout channel, and never looked back. “It’s so effective,” she says. “After a workout, I’m literally dripping.”

It is possible to exercise as effectively on your own at home as you would in a gym under supervision, depending on your own motivation – but there are risks. Most digital fitness programmes include warm-ups and cool-downs, but it’s possible to overdo it – and SWEAT’s focus on fat loss (users are encouraged to post photos documenting their progress towards “bikini body confidence”) may be triggering for people with eating disorders or obsessive exercise habits.

“I was too regimented and hardcore about it,” says 27-year-old New Yorker Elizabeth Megrabyan, who works in advertising. Megrabyan bought the Kayla Itsines pdf (a forerunner to the SWEAT app) in 2016. She would amend the programme to cram in more high-intensity interval training (HIIT). “I was trying to achieve results faster. I think I became too obsessed with the programme – they show people’s progress pictures and I thought: ‘I want that.’” Megrabyan ended up in hospital with rhabdomyolysis, a potentially life-threatening illness sometimes caused by extreme muscle strain.

The physiotherapist Adam Meakins advises people in general to avoid high-intensity workouts if they are new to exercise. “The risk with a novice going in and doing HIIT exercises is that you can end up pulling something in your muscular-skeletal system a lot more easily than you would if you were an experienced exerciser whose body has adapted resilience to explosive forces.” That said, he welcomes anything that will get people moving. “There are always risks associated with any exercise … the biggest risk factor is not doing any exercise at all.”

Of course, gyms are more than just places we work out in – they are also important social hubs, particularly for self-employed people. I know this first-hand: as a freelance journalist, the only reliable interaction I have is with the trainers in my local gym, which I attend daily. Stripping that human contact out of my life would be alienating.

Digital fitness apps try to combat this by encouraging users to form communities online: FIIT has a Facebook group, while SWEAT fans congregate on Instagram. When I speak to Allen, she is in the middle of a 30-day SWEAT challenge, in which users pledge to work out every day for a month and cheer each other on online. Allen says she has made friends through the SWEAT community. “You interact with other people, and they interact with you, and it’s so positive … it’s lovely. I don’t feel like I’m doing it alone.”

FIIT’s interactive leaderboard approximates the experience of working out in a fitness class. “Other people working out with you gives you that accountability, and makes you work harder,” says its co-founder Sammi Adhami.

Does the digital fitness industry want to run gyms out of business? SWEAT’s Pearce laughs awkwardly: “I wouldn’t necessarily say that’s our target.” But it may already be happening. Lauren Ryan of Mintel notes that Peloton’s North American “ridership” exceeded that of the boutique spin studio SoulCycle for the first time last year: “This indicates that digital fitness is already challenging gyms and fitness studios in other parts of the globe.”

Still, it is a rare person who is driven enough to work out at home indefinitely, without a trainer shouting at them or classmates encouraging them on. (And there will always be people who require gym equipment.) “There’s a certain subset of the population who are going to be motivated enough to use this stuff at home,” says John Porcari, a professor of exercise and sport science at the University of Wisconsin-La Crosse. “But do I think it will replace gyms? No. I think the face to face interaction and camaraderie of working out in gyms is more powerful than working out at home.”

Back in my living room, I crash about, mid-FIIT workout, as my boyfriend watches quizzically. “Get out of here!” I shriek, banishing him to our bedroom. Partway through a set of squat jumps, I silently apologise to my downstairs neighbours. Throwing myself to the floor for burpees, I am covered in crumbs. “I must vacuum more,” I think, lying prone on the rug. Above me, Herbert’s six-pack gleams god-like under the studio lights. “Come on, team!” she exhorts. I haul myself up.

Considering I am working out a mere split-lunge away from my sofa, FIIT’s leaderboard helps me stay surprisingly motivated – even if I do end up languishing in 10th place, despite my best efforts to overtake “Sharron T”. (Next time!) I clock out with a heart-rate of 176bpm, feeling euphoric. Provided you have the space and the motivation, the future of digital fitness looks promising. Of course, there’s another way to work out at home that doesn’t cost anything: housework. Now, to vacuum that rug.