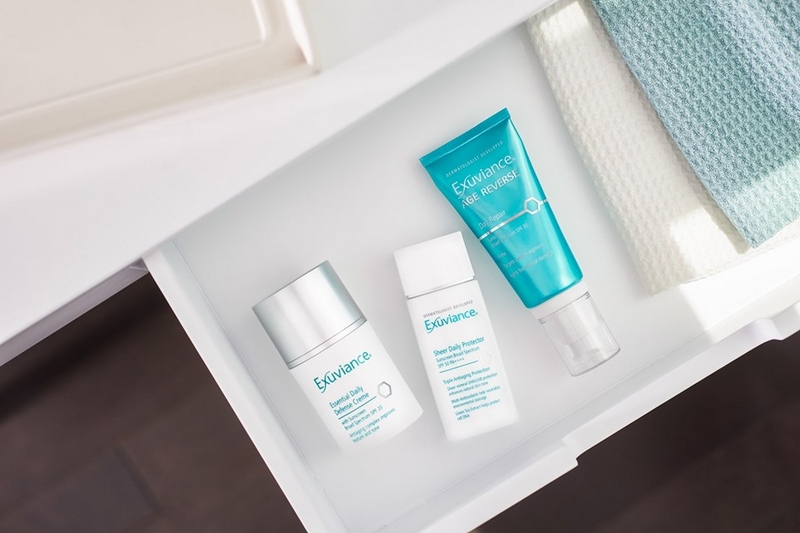 Protect and repair with Exuviance; @facebook.com/Exuviance

This article titled “The best poly hydroxy acids” was written by Sali Hughes, for The Guardian on Saturday 17th August 2019 07.00 UTC

Liquid exfoliants have replaced the formerly pointless middle step in the cleanse-tone-moisturise routine, but I know from your messages that many of you feel frustrated at not being able to use them. Commonly, you seek the glow and smooth texture imparted by acids, but find alpha hydroxy acid (such as glycolic, lactic and mandelic) and beta hydroxy acid (usually salicylic) exfoliants sting, irritate or make your skin prohibitively dry. Often you simply fear them, convinced they will cause your sensitive skin to ignite as though flambéed, then peel off like backing film.

Before you abandon the idea entirely, consider trying the less common poly hydroxy acids (gluconolactone, galactose, lactobionic) to do the same job. I love them: as well as being a little gentler than other direct acids, PHAs are also humectant, meaning that those with dehydrated skin should feel the benefit and comfort.

It is for this reason that PHAs accompany AHAs in Exuviance’s Night Renewal HydraGel (£31, 50ml), a terrific product for oily and combination – but still thirsty – skin. The gel, applied after night-time cleansing, efficiently gobbles away dead cells while ensuring skin doesn’t wake up in a tetchy mood. (If oily, bear in mind that only BHAs can penetrate oil-blocked pores to clear spots).

If you are on the drier or older side, you will be better off with Exuviance’s Soothing Toning Lotion (£28, 212ml), swept over clean skin for a sting-free, smoothing exfoliating action. I could easily have included many more recommendations from Exuviance and its parent company, NeoStrata, since its headstart on PHAs made it a strong player – its exclusive patent expired only recently, hence the flurry of new products in the wider industry.

I love the clarity and fair pricing of Garden of Wisdom, and its PHA Plus Serum (£14, 30ml) is a typically solid purchase. While it doesn’t deliver the megawatt glow of something like glycolic acid, it has none of its sting, and certainly gives the complexion noticeable perk when applied daily (massage in straight after cleansing). It is an ideal choice for the super-sensitive, menopausal, rosacea-prone or interested beginner.

Finally, I am mad for Lixirskin’s Night Switch PHA/AHA 10% (£20, 15ml). It combines a gentler AHA, lactic acid, with the PHA lactobionic to strike a perfect balance. Used nightly for a fortnight before taking a break, it spanks lacklustre skin with lambskin mittens. And all these products are cruelty free.

• Comments on this piece are premoderated to ensure the discussion remains on the topics raised by the article. Please be aware that there may be a short delay in comments appearing on the site.