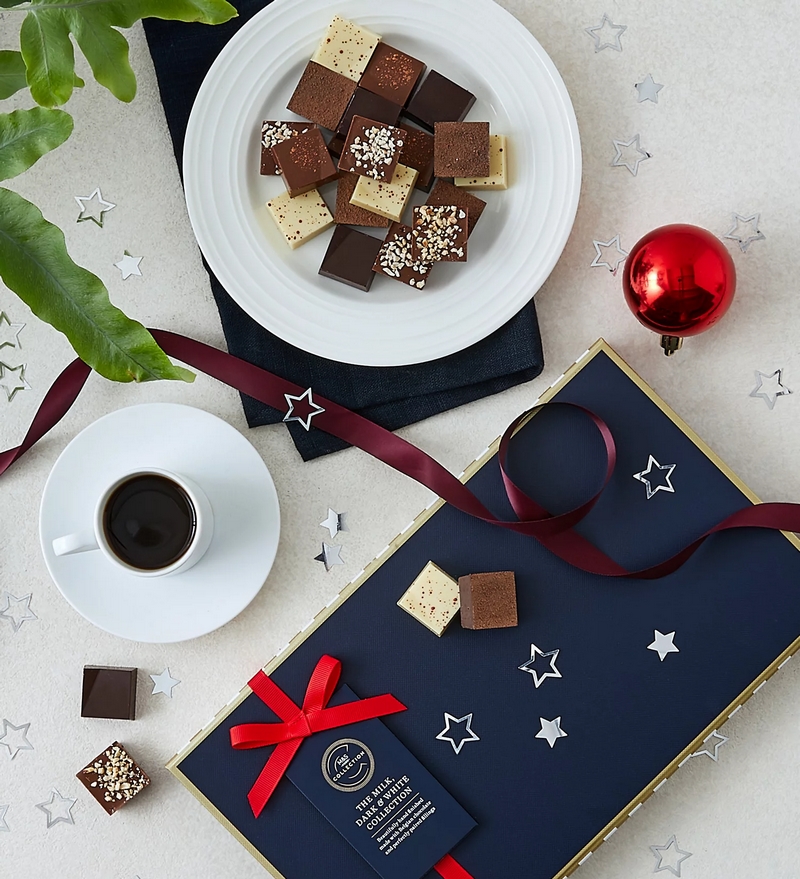 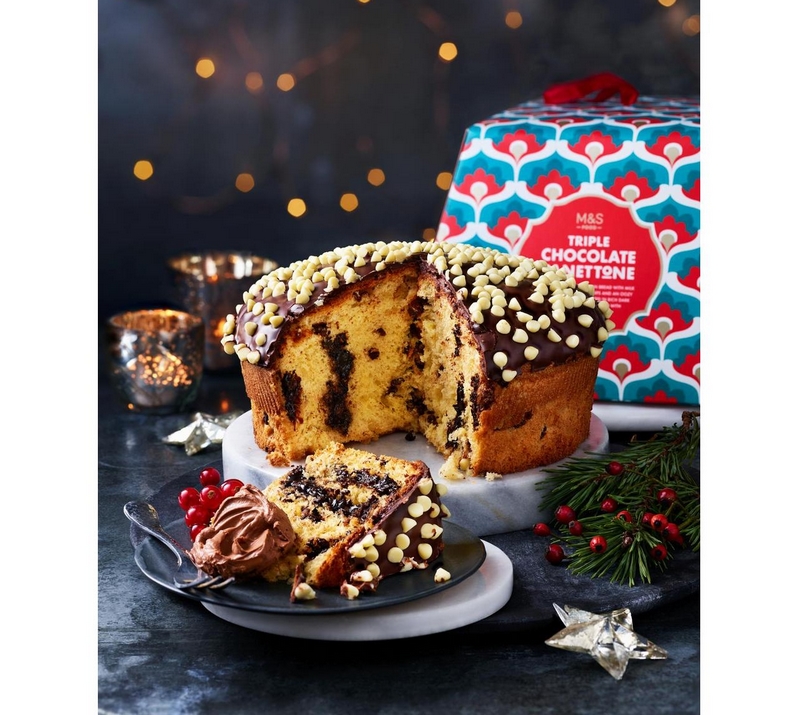 This article titled “The Christmas taste test challenge: the chef v the critic” was written by Ravinder Bhogal and Jay Rayner; compiled by Molly Tait-Hyland, for The Observer on Sunday 6th December 2020 08.01 UTC

Taste the Difference Buck’s Fizz Marmalade
340g, £1.60, sainsburys.co.uk
Ravinder My late dad was fond of marmalade – like gammon and pineapple it was a relic of his student years in England. I can almost see him scraping out the remnants of this jar onto his toast now – a dense set with chunks of peel, a cheeky whiff of booze and as bittersweet as my memories of him. ★★★★
Jay Buck’s fizz is champagne with orange juice. As a traditional marmalade is made with oranges, to justify the product name it would have to offer a boozy kick. There is none. ★★

Asda Reindeer Crumpets
6, £1, asda.com
Ravinder No cutesy Rudolph shaped pastry cutter can save this dream of good bread gone awry – a flabby texture with zero tang, like chewing on a flat tyre. 0 stars
Jay It’s a well-made crumpet. In the shape of a reindeer’s head. For Christmas. What’s not to like? ★★★★

Marks & Spencer Triple Chocolate Panettone
750g, £10, marksandspencer.com
Ravinder A middle finger up to years of Italian baking tradition –raisins and candied fruit are ludicrously replaced with a saccharine chocolate glaze and white chocolate chips. ★
Jay I have a sweet tooth so I wouldn’t say no to this, but it’s not a panettone. The hard, dark chocolate icing, the white chocolate nibs and the liquid chocolate centre instead of the peel mean it’s a cake. You couldn’t toast it. ★★★

Taste the Difference Sticky Toffee Pudding Shortbread Rounds
500g, £10, sainsburys.co.uk
Ravinder Dunkable enough with a good amount of dates, but proper shortbread leaves a smattering of buttery crumbs to gather up with the padded tip of your index finger – these didn’t leave a speck. Smells like 10 pumps of caramel syrup at a well-known coffee chain. Injurious to tooth enamel. ★★★
Jay A nice enough biscuit, but a few pieces of date and a little toffee does not a sticky toffee pudding make, however nice the box. ★★

Heston From Waitrose The Night Before Christmas Mince Pies
6, £3.50, waitrose.com
Ravinder An attractive little puck of pastry that fits nicely in the palm of your hand. Boozy, fruity, aniseed spicy with delicious pastry – reminded me of a fig roll. Tastes like a toasty night in by the fire. ★★★★★
Jay Great, short pastry and a punchy filling, but there’s too much of the former and not enough of the latter. The spiced sugar for dusting is a nice touch. ★★★

Specially Selected All Butter Sloe Gin Mince Tarts Topped With Flaked Almonds
6, £2.49, aldi.co.uk
Ravinder Attractive, golden, buttery pastry. Generous toasty almonds. Can’t taste the sloe gin or much booze at all – more like a bakewell tart in flavour but lovely to eat all the same. ★★★★
Jay Bright, almost sherbet flavour. Great pastry. A really enjoyable mince tart, even if it has nothing especially to do with sloe gin. ★★★★

Co-op Irresistible Roast Potato Hand Cooked Crisps
150g, £1.70, coop.co.uk
Ravinder A big hit of rosemary and the crispy bits on roasties that every domestic goddess aspires to. A tad salty, but reader, I scoffed these by the handful. ★★★★
Jay Crisps made of potato that are meant to taste of roast potatoes? Well, no. They mostly taste of rosemary, which is fine as far as it goes, but not what’s promised. ★★

Co-op Irresistible Garlic & Parsley Sharing Bread with Camembert
290g, £4, coop.co.uk
Ravinder Once cooked it was more camembert soup than seductive ooze – thin, austere and mean – none of the things I want for Christmas. The bread was plainly inoffensive. ★★
Jay I looked suspiciously at this but in truth, it works and disappeared quickly. A fun and useful addition to the table. ★★★★

Co-op Irresistible Cranberry & Port Flooded Pork Pie
440g, £4, coop.co.uk
Ravinder My pie expectations are sky-high (thanks to Calum Franklin’s insta feed) but this one is pretty good. Great colour on the jelly, smugly self-congratulatory gold star decoration, artisanal feel to the sturdy savoury pastry and sage-rich pork stuffing that’s generous and as dense as a shotput. If you are big on pig – this is one to oink over. ★★★★
Jay A serious bit of pork pie, with a cracking hot water pastry crust and a terrific balance of sweet jelly to well-spiced meat. This has been made by someone who knows exactly what they’re doing. ★★★★★

Asda Extra Special 6 Double Chilli Pigs in Blankets
216g, £2.75, asda.com
Ravinder Pigs in blankets are my favourite part of Christmas dinner – porcine nuggets of Yuletide cheer that distract from an unsuccesful turkey. These spicy ones aren’t terrible when you lose the strange half jalapeño jacket which still remains undercooked after 20 minutes in the oven. ★★★
Jay Of course, you could buy spicy sausages, bacon and fresh jalapeños yourself and put these together, but they’ve done it for you. If these were going round at a party, I’d scoff the lot. ★★★★

Waitrose Breaded Baking Vegan Melts With Redcurrant Relish
£4, 200g, waitrose.com
Ravinder A neat serving of passive-aggressive on a plate for the vegan guest who’s being a nuisance by not tucking into the Copas bronze turkey like everybody else. Coagulated interior and rancid relish, but a star for the nice even pané of crisp golden breadcrumbs.★
Jay All my experiences of vegan “cheese” leave me muttering one word: why? The score is because I understand some people might appreciate this. I am not one of them. ★★

Waitrose No.1 Seafood And Lobster Thermidor Pâté
150g, £6, waitrose.com
Ravinder Rich, delicious and creamy with good-sized chunks of seafood – it was love at first bite. Needs little more than thin slices of toast, a squeeze of lemon and a glass of something uplifting. ★★★★★
Jay It’s not a pâté. It’s a dribbly, insipid liquid, and an insult to the words “lobster” and “thermidor”. File this under “when new product development goes wrong”. 0 stars

Marks & Spencer Scottish Salmon ‘Pastrami’
100g, £5.50, marksandspencer.com
Ravinder Lovely, generously thick slices of fatty salmon, but what tastes like truckloads of table salt overwhelms anything else. I had to chug pints of water straight after eating this. ★★
Jay I was suspicious of this but as pastrami is smoked and spiced beef, it made sense that salmon could be treated in the same way. Terrific texture and nice cure. It could have been slightly more spiced, but still good. ★★★★

Sainsbury’s Pigs in Blankets Mayo
280ml, 95p, sainsburys.co.uk
Ravinder A condiment fit for the Grinch. Coming to a bargain bin/landfill near you. 0 stars
Jay A bog-standard mayo which hasn’t even been waved at a pig. It’s just pumped up with artificial smoke flavour. ★

Waitrose Truffle Coastal Cheddar
200g, £3, waitrose.com
Ravinder Awful oily texture and tasted more like fusty mushrooms and sour milk than a good time in Alba. Not even a whiff of truffle. Like losing a tenner and finding a pound – disappointing. 0 stars
Jay A great cheddar but there’s only a hint of truffle if you suck it, and who wants to suck cheese? ★★★

Tesco Finest Port Infused Aged Blue Stilton
250g, £3, tesco.com
Ravinder I confess I am a stilton dodger so this was never going to be a winner. No trace of the port but it’s a pungent, woolly and creamy number – great if that’s what floats your fromage boat. ★★
Jay A quality stilton with a nice, sweet boozy kick. A solution for anyone who has no need of the size of stilton round you would normally require if you wanted to feed it with port. ★★★★

Marks & Spencer Cheese Grazing Box
775g, £25, marksandspencer.com
Ravinder If this cheese board had a personality type it would be a people-pleaser. Sharp cheddar, red Leicester, Brie and a veiny blue plus some juicy dried fruits and sweet nuts mean that no one is left wanting. Minus one star for the packaging. ★★★
Jay I was suspicious of this, but for a small household it’s a great way to have a range of quality cheeses. ★★★★

Specially Selected Handmade Pink Gin Marshmallows
100g, £1.79, aldi.co.uk
Ravinder Smells like the rosy strawberry delight one from a box of Quality Street which makes me giddy with nostalgia – I could almost hear the rustle of the pink cellophane wrapper – but tasted like toilet freshener. The thin milk chocolate covering was the only saving grace. ★
Jay There’s a simple test with many of these products: would you know what it was meant to be if you hadn’t read the label? In this case, the answer is no. A perfectly acceptable chocolate-covered and lightly fruity marshmallow. ★★

M&S Collection Milk, Dark & White Chocolate Selection
440g, £15, marksandspencer.com
Ravinder Presented like a beautiful chocolate paintbox – decent chocolate and good flavours apart from the weird white chocolate raspberry one that took me back to my mother medicating me with Calpol when I’d been bad. ★★★★
Jay A smart, beautifully presented collection, made with well-tempered chocolate which cracks at room temperature. Great fillings too. I’d be delighted to receive this and mourn its passing. ★★★★★

Asda Extra Special Sour Cherry Nougat Bar
100g, £2, asda.com
Ravinder It looked bright and inviting enough but it was hideously sweet, chewy and sticky and left my teeth with a gummy residue that was impossible to remove. Well at least my jaw got a workout. ★
Jay Nice nougat and a cherry flavour but if you use the word “sour” I want acidity, and there’s none. ★★

Tesco Finest Sparkling Sloe & Plum Pressé
750ml, £2, tesco.com
Ravinder Repulsive flavour of parma violets mixed with acetone, like an old lady’s delicates drawer. This went straight down the sink. 0 stars
Jay A burst of sweetness and fruitiness at first, which is quickly replaced by the foul tongue-vibrating hit of artificial sweeteners. I know why they’re used; that doesn’t make them nice. I had to drink water to get rid of the taste. 0 stars

Tesco Finest Prosecco Valdobbiadene DOCG
75cl, £10, tesco.com
Ravinder Powdery, bitter and far too fizzy – reminds me of that time I got a bullet sized malaria pill lodged in my throat. ★
Jay A serviceable, medium-dry prosecco. Not too teeth-janglingly sweet. ★★★

Asda Extra Special Vintage Champagne Brut
75cl, £26, asda.com
Ravinder A fruity, genial, easy to quaff number that’s so charismatic it practically does jazz hands. ★★★★
Jay If the word “vintage” really matters to you then this is a reasonably priced option, for an appealingly biscuity and crisp champagne. But there are many equally serviceable and better-priced champagne options. ★★★