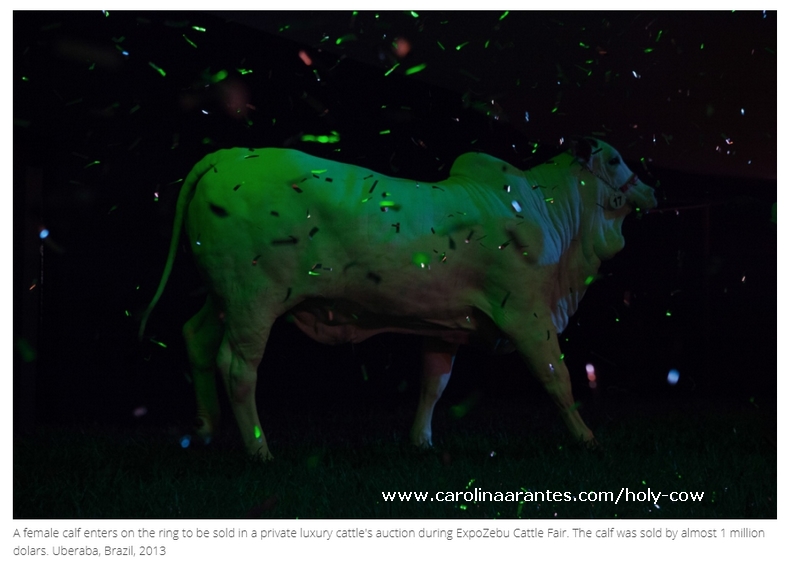 This article titled “The million dollar cow: high-end farming in Brazil – photo essay” was written by Naomi Larsson, for theguardian.com on Thursday 10th May 2018 14.33 UTC

Jabriel is an awesome, imposing creature. His humped figure, size and weight represent everything that is prized and revered in a bull. He is quite literally the top of the pyramid in Brazil’s vast, complicated and money-driven cattle industry.

Jabriel is what can be described as a “luxury bull” – his genes so perfect that he lives protected in the farm of a lab in the south-eastern state of Minas Gerais where his sperm can be used to father as many as 600,000 heads of cattle. A bull like Jabriel is worth up to $1m.

Selected cows in the pastures of the Corixo farm

“You feel very weak next to an animal like this, I was quite frightened to be so close to this animal. It’s a huge animal,” says photojournalist Carolina Arantes, who took the arresting portrait of Jabriel. “I think it reflects the energy of the business – the power, the heaviness and the size and the force.”

Arantes, who is now based in France, spent three years travelling back and forth to her home country to document the secret and often spectacular world of luxury cattle farming. Her project, entitled Holy Cow, traces the rural capitalists and their designer cattle that make up this billion-dollar industry.

“I don’t think Brazilians know exactly how important it is. Some people know the size, but they don’t know exactly the weight of this and the global meat industry,” she says.

Jabriel is the property of Navirai Farm. One of their most important clients is the Rodrigues family, owners of a 38,000-acre farm, and one of the Brazilian families that has for decades been cross-breeding cattle to improve the quality of the meat and the profitability of their beef herds.

Their work dates back to the 19th century when the zebu – a horned and humped animal – was brought over from India to mix with the European breeds that were already being farmed in Brazil. Viewed as a holy animal in India, the zebu is has, in a way, become sacred for the Brazilian farmers too, as its genes are part of some of the most prized bulls in the country, like Jabriel.

Farmers work with genetics companies to improve the performance and profitability of their herds. In laboratories such as Alta Genetics in the state of Uberaba, the genes of the most elite cows and bulls are stored and fertilised before the embryos are transported to the company’s clients – breeders and wealthy farmers – to artificially inseminate surrogate cows across the country. Alta Genetics has the capacity to house 279 bulls, carefully looked after to make sure there’s a good production of semen.

These farmers and scientists are working to create cattle types that will be fatter, stronger, quicker to maturity, according to Arantes. “The farmers in their genetic labs are thinking how are they going to cross to create animals that can go to slaughter houses earlier, that can be fat enough, that can handle storms and rains for a long time, or dry moments for long time – animals that can be adapted to the impacts of climate change.”

The end goal, Arantes argues, is to increase Brazil’s power in the international meat industry, even to the point of producing animals to be resistant to changes brought about by global warming.

She says the sperm of these elite bulls may cost $5,000 per 0.55ml dose, so buying them is an investment. “It’s an animal that’s turning into a bank – its genetic material is selling for so much.

“The owners of this cattle are keeping them in these labs; it’s like a pet shop. The owner keeps the bull at Alta Genetics, and on his farm he crosses its genetic material with other animals of quality, and then maybe he sells the [offspring of] these animals in auctions.”

At the cattle auctions, which are drink-fuelled and extravagant affairs, the animals are judged for their quality based on ankle size, testicle size, and even the distance between their eyes.

The auctions are exclusive, dominated by wealth and macho culture

The auctions are exclusive, dominated by wealth and macho culture, Arantes says. “It’s a very male environment. All this cattle business is very conservative in Brazil, very catholic, macho, white – and it’s important because they are very linked to politics,” she says.

It is the exclusivity and wealth at the top of Brazil’s meat industry that makes it so intriguing. Though the industry has been tainted by the use of slave labour in its farms, to corruption scandals reaching the higher echelons of government, Brazil overtook the US as the biggest meat producer in 2012 and aims to reach a 40% chunk of the international beef market soon – almost doubling its current status. The production levels are incredibly high. Hong Kong, for example, bought more than 98,000 tonnes of beef in February alone.

There’s currently roughly one head of cattle per person in a country of 200 million people, and though Brazil is a large country with vast amounts of land, the environmental implications are significant. “It’s the intention of the [agricultural] lobby to double this number [of cattle] in the next decade, but do we, the Brazilian people, want them to double this number? Is it what we need to do now in the world? This should be discussed openly,” Arantes says.

• This article was amended on 11 May 2018. Jabriel is the property of Navirai Farm, not the Rodrigues family as an earlier version said.