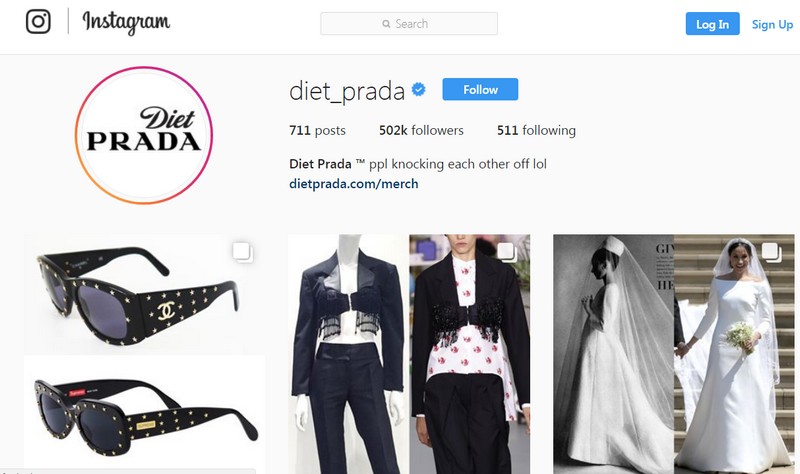 This article titled “Diet Prada: the Instagram account that airs the fashion industry’s dirty laundry” was written by Hannah Marriott, for The Guardian on Tuesday 22nd May 2018 16.00 UTC

When future historians identify the definitive fashion moments of 2018, they will surely alight on the meteoric rise of Diet Prada. With 489,000 followers – including power players such as Naomi Campbell, Edward Enninful and Gigi Hadid – the Instagram account is on a mission to expose copycat design. Its popularity says more about fashion’s mood than any shoe, silhouette or hemline.

Diet Prada’s methods are simple. Photographs of new designs are juxtaposed with images of older, all-too-similar work. Followers are invited to “tsk tsk” along in the comments. Embarrassment ensues. Sometimes, designers issue clarifications, as Kim Kardashian did when Diet Prada said that her childrenswear line looked like Vetements and Comme des Garçons. (Kardashian said the designs were homages, not copies.) On other occasions, products are pulled. The account calls out other failings, too: cultural appropriation, lack of model diversity, toleration of abuse. In the fashion industry – which is run on a sort of weaponised niceness, all bouquets of flowers and handwritten thank-you notes – dirty laundry has never been a good look. Until recently, such candour was unheard of.

Diet Prada was run anonymously until the names of its founders – Tony Liu and Lindsey Schuyler – starting appearing on fashion blogs earlier this year. They confirmed their identities in an interview a fortnight ago. Both are freelance designers and product developers, part of the usually silent majority working at labels you may not even have heard of. The account began for fun, as an archive of conversations they were having anyway. Now, Diet Prada has legions of fans with their own collective noun: “dieters”. Those who provide the best tipoffs are “star dieters”.

Some of these devils wear Diet Prada. Because, as has become customary for an internet sensation, there is merch. Most covetable are the hoodies celebrating their highest-profile scalp, Kardashian, emblazoned with the logo: “Kim des Garçons”.

Diet Prada’s popularity is related to the “call-out” culture of the internet, but it also represents a shift in attitudes where shopping is concerned. “I think we are in a time when everyone is really questioning the choices that they make and there is this move towards more consciousness as consumers,” says Liu.

Copycatting is far from a victimless crime, says Schuyler, “especially for small designers. It can wreck their businesses.” The most satisfying element of Diet Prada, adds Liu, is “helping out small companies that don’t have financial resources to litigate”. Bigger companies have such marketing power that, if they rip off a design, most consumers never become aware of the original, he says. “If they do come across it, they may think: ‘Who is this making a more expensive version of this piece?’”

This winner-takes-all model of global design may explain a lot about the way we all dress. It is often said that fashion has not created a definitive silhouette in the past 20 or 30 years, particularly when compared with shifts in style between the 40s and the 70s. Global brands ripping off and watering down designs before their makers have the chance to establish themselves is surely the ultimate impediment to creativity.

Diet Prada is not alone in its quest to shame copycats. The same tools it uses – advances in image search technology, comprehensive archives of catwalk shows, the unprecedented speed of internet communication – fuel viral outrage over knockoffs, offensive T-shirt slogans and cultural appropriation in fashion. In March, a Vogue journalist criticised Vivienne Westwood for ripping off young British designers Rottingdean Bazaar and Louise Gray. (The label has since apologised for failing to ask for permission for what it described as a celebration of the original work.) Last summer, Gucci was accused of copying 80s bootlegger Dapper Dan, a charge that came directly from the Instagram account of Olympic runner Diane Dixon, who wore the original outfit in 1989. (Gucci described the work as a homage. In a fashion-is-eating-itself development that has become its own microtrend, Gucci and Dapper Dan have since become collaborators.)

According to Liu and Schuyler, fear of public shame could change fashion for the better. Many designers, they say, are so frightened of being caught out that they are completely rethinking their approach. Consumers have a responsibility, too, says Liu. He urges shoppers to eschew cheaply constructed knockoffs in favour of vintage, garments tailored to their own specifications or “pieces that will last longer in terms of style”, even when they are inexpensive. “Even taking the time to learn what makes a quality garment can help people make better choices and put less stuff in the landfill,” says Schuyler.

Despite the Robin Hood element to its work, Diet Prada has been accused of using its voice unfairly. One of its most powerful detractors, Dolce & Gabbana’s Stefano Gabbana, has clashed with them so often – and so vehemently – that Liu and Schuyler claim he is the hand behind an anonymous Instagram account – Diet Ignorant – devoted to calling out Diet Prada. (Dolce & Gabbana declined to comment.) In another awkward exchange, Diet Prada faced the ire of many well-known British fashion-industry names when it accused London-based designer Richard Quinn of making Balenciaga references. (The fashion insiders defended Quinn, arguing that he had explored the aesthetic to which they referred before Balenciaga; Liu and Schuyler say they “stand by” the post.)

Clearly, the fact that a pair of unknowns can rile established names is testimony to the power of the internet. Their emergence also feels like part of a gradual, generational shift: Liu is 32; Schuyler is 30. Their attitudes are at odds with the self-censorship so often adopted by the tribal elders of the industry. They say, for example, that they feel no guilt when they call out designers (“If people think we are ruining the fashion industry then they need to come up with their own ideas,” says Liu), nor do they worry about their future careers (“If someone won’t hire me because they see that I stood up for workers’ rights then that’s their problem,” says Schuyler).

Still, the moment that Diet Prada blew its cover, impartiality became more difficult. Why not remain anonymous? Liu says that they needed to “control the narrative” around the reveal and that it came at a point “when we had earned our place in the industry”. Also, he says “there are business opportunities that would only work out if we were in the open. There are things we are working on that may be up our alley and we wouldn’t have to compromise what we do – we are very conscious of that.”

Earning money as Diet Prada has already proved challenging. In February, Liu and Schuyler were accused of losing their teeth after attending fashion shows and being paid to take over Gucci’s Instagram Stories. Although the pair insist they remained unbiased – they posted a criticism of Gucci’s use of turbans at the show they attended – they agree that future work will have to be managed very carefully. The plan, says Schuyler, is to “continue to build this community that has come together to support transparency and make it a constructive force”. Brands are interested in Diet Prada, she says, “because I think we are becoming known for having a voice of authenticity. But that’s also why it’s very hard to align with any brand. Because who is 100% authentic?”