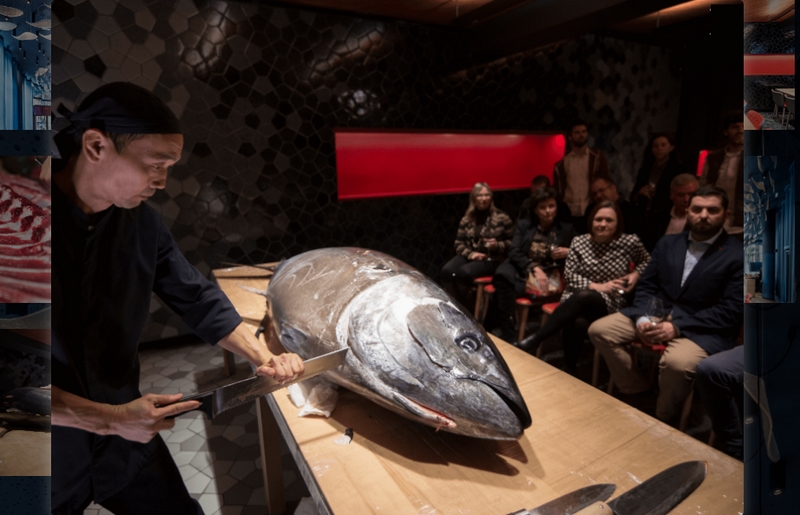 This article titled “A foodie homage to Catalonia: a tour of its unsung delta” was written by Gavin McOwan, for The Guardian on Sunday 12th August 2018 09.00 UTC

I’m snorkelling in the Mediterranean, three miles off the Catalan coast, and for a heart-stopping split second I’m eyeball-to-eyeball with my dinner – a 250kg bluefin tuna that shoots out of the deep blue abyss like a torpedo a metre below me. Our group of 30 or so snorkellers is surrounded by hundreds of the fish. When they swim past, they are moving so fast we feel the force of their wake and scream with excitement. I’d heard of fishing for your supper before … but never swimming with it.

The Tuna Tour (adult from €25, child €15, tuna-tour.com) is a spin-off from a state-of-the-art fishery business run by a company called Balfegó in the small town of L’Ametlla de Mar, near Tarragona. Each summer, enormous shoals of migratory tuna return from the Atlantic to their spawning grounds in the Med. Once the fish get to this bit of the Costa Dorada, two trawlers joined by a 2km-long net encircle thousands of them, and divers corral them into netted pools 50 metres wide and 35 deep.

The tuna are fattened up on tons of fresh fish until the larger ones are ready to be caught. They’re sold locally or packed in ice and flown to restaurants as far away as Japan, some for more than €5,000. This sustainable hi-tech method, a hybrid of traditional trawling and fish farming, ensures smaller fish are released at the end of the season, and provides year-round availability.

On the catamaran ride back to shore, I eat a plate of tuna sashimi the colour of rump steak and so deliciously fresh it melts on my tongue. I’ll meet these same tuna later on my trip, after I’ve explored more food of the Ebro delta (Delta de l’Ebre in Catalan), a large wetland area at the southern tip of Catalonia.

If electronically tagged tuna are at the cutting-edge of food production here, the delta’s heartland is its ancient rice fields, irrigated by a network of canals and ditches first introduced by the Moors.

Wedged between the sea and the Ports de Beseit mountains, the delta is a serene flatland perfect for spotting dozens of species of aquatic birds – including black-winged stilts, herons, egrets and terns in the big blue skies, and hundreds of pink flamingos lazing in the marshes.

I cycle the dry dirt paths of the Ebro Delta natural park on an electric bike (tour €35pp, bikes come with GPS for self-guided tours, half day hire €24). This is a first for me after a lifetime of proper cycling and, oh, what a relaxing joy! I’m here in late spring and the rice fields are merely flat water – but in summer they’re a stunning patchwork of shimmering emerald.

At the end of the ride is another modern, delicious twist: Mediterranean sake. Kensho is only the second sake producer in Europe – and the first to use locally grown rice. We sample its small range, paired with fat delta oysters (this sake goes well with strong unami flavours). Meritxell Jardí, from a family of rice farmers, and husband Humbert Conti, an engineer from Barcelona, set up the junmai (premium) sake distillery three years ago to showcase the region’s paella rice and also “to try something different”. They could really be on to something here: the punchy Genshu Rocks made from highly polished rice is so good our group can’t stop drinking it, and I buy a couple of bottles to take home.

The traditional way to eat the regional speciality is a paella, sometimes called arrossejat (literally “local rice”), cooked over wood. As with its Valencian cousin, the ingredients depend on what’s available: duck, eel, rabbit, artichokes, seafood. I eat a paella in the traditional barraca style house of Josep Bertomeu Polet, whose eco-tourism company DeltaPolet, runs a variety of hands-on conservation tours of the delta and rice fields for adults and children but only in Spanish at present. Barraca restaurants known for their local rice dishes include Casa Asmundo in Sant Carles de la Ràpita, and Lo Pati d’Agusti in Poble Nou, both just down the coast from the delta.

The food I try is hyper-local: in fact, I’m literally sitting on top of it at Musclarium , an oyster and mussel farm a short boat-taxi ride fromSant Carles de la Ràpita, where the molluscs dangle in the water on ropes hanging from pontoons, one of which has a restaurant above it. The region is known for its shellfish, and Musclarium surely serves the freshest – the chefs simply pull them out of the water, then shuck the oysters and throw the mussels into a pan.

Even on a cold, cloudy day this is a great place to kick back with a dozen oysters and a glass of cava. With gorgeous seafood (paella plus the catch of the day) and chilled drinks a mile offshore, sea breezesand the water only steps away for a cooling dip – it must be a heavenly retreat in the Spanish summer heat.

While the beaches north and south of here are busy in summer, the Ebro has swathes of quiet golden sand. Backed by a lagoon and mountains, the four-mile Playa del Trabucador is one of the Spanish Med’s finest beaches but, being part of the parque natural, will remain undeveloped.

If the Baix Ebre, or Lower Ebro, is untouristy compared with other parts of Catalonia, the Terra Alta, or highlands, feels even more remote. It’s one of the most sparsely populated areas of Spain, yet there’s plenty to see. I visit the oldest olive tree on the Iberian peninsula, perhaps in the world, at Oliveres Millenàries d’Ulldecona: 1,700 years old, the gnarled tree was planted in the time of the Emperor Constantine, when Rome ruled Spain – yet it is still producing olives.

Even more fascinating is a “wine cathedral” in nearby El Pinell de Brai. Built in modernist style in the early-20th century by Cèsar Martinell, a disciple of Gaudí, it has three majestic naves and really does feel like an exaltation of viticulture. Built by a wine co-operative, it closed in the 80s as the region’s grenache grapes went out of fashion but the building was reopened in 2010, offering tours of its cavernous interior: there’s a wine shop andan excellent contemporary restaurant.

The area’s wine industry is now recovering, and I see some of the vines, as well as almond and olive groves, when cycling a vía verde (greenway) through these limestone mountains and valleys. It’s so peaceful up here it’s hard to imagine that this was the site of the 1938 Battle of the Ebro, the longest and bloodiest of the Spanish civil war. The vía verde has been converted from the railway built at breakneck speed by General Franco to trap, and ultimately defeat, the Republicans in the hills. I ride a short section with wine tour operator Viorigen, departing from the disused railway station at Horta de Sant Joan.

Viorigen’s main line of business is wine tours of the Terra Alta vineyards (from €15pp), so our leisurely (mostly downhill) ride through tunnels and dramatic green valleys finishes with a wine tasting and picnic lunch at La Fontcalda (hot spring in Catalan), one of the most beautiful spots on the route – a narrow river at the bottom of deep limestone cliffs.

It’s a lovely way to end my tour of this unsung corner Spain. But I have one more stop before flying home Barcelona – a reunion with those tuna. In another clever bit of vertical integration and marketing, the company has opened a restaurant, Tunateca Balfegó, in the city’s swanky, uptown Eixample district.

There’s only thing on the menu here – no prizes for guessing what. Even the beautifully designed interior is a homage to tuna – hundreds of handcrafted frosted glass fish hang from the high ceiling and spiral around the deep blue columns and curtains, making it feel like we’re under the sea. The seven- and ten-course tasting menus (a reasonable €52 or €72 given the ambition of the cooking) use every part of the Thunnus thynnus.

The menu is a mixture of Japanese and Mediterranean cuisine. The first few courses are prepared in front of diners by two sushi chefs, with sublime sashimi, tataki and carpaccio garnished with roe, sweet tomatoes and oysters. Dishes then switch from red slivers of choice cuts to meatier, even earthy flavours of tuna cheeks, belly and dirty brown tuna heart kebabs.

I’m gobsmacked at the variety of flavours and dishes that can be created from one fish– and by the rich culinary heritage of this beautiful, little-known area. A tuna mayo sandwich will never hit the spot again.

• The trip was provided by the Catalonia and Terres de l’Ebre tourist boards. In the Lower Ebro stay at the Delta Hotel (doubles from €88 B&B), with basic rooms and an excellent restaurant; in the Terra Alta stay at the Can Josep Hotel (doubles from €82 B&B) has comfortable rooms and serves good traditional Spanish food in a dining room with great views over the hills