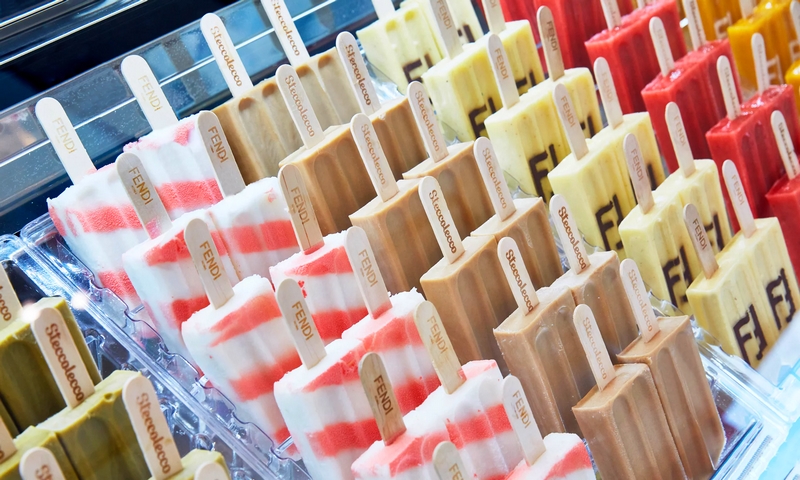 This article titled “Lick and it’s gone: Fendi’s designer ice-cream” was written by Morwenna Ferrier, for The Guardian on Wednesday 15th August 2018 15.04 UTC

These days in fashion, you can’t move for logos. As common as a floral print, yet not nearly as genteel, they are the quickest way to turn the wearer into a massive advert. In the last few years, they have been found a new home on all sorts of incongruous non-fashion items. Some of these have made commercial sense, such as logo lighters. Similarly, to an extent, Tom Ford made sex cool again in a 2003 advert when he shaved the Gucci emblem into a model’s topiary.

Then there’s food and, in this instance, an ice-cream lolly with the Italian label Fendi’s double F logo stamped on one side – hilariously implying that a significant number of fashion people actually eat.

As someone who works in fashion yet occasionally eats, I felt compelled to try one. The Fendi ice-cream can be bought throughout August from Selfridges and was devised in collaboration with ice-cream specialists Steccolecco, whose branch in Prati, Rome, is populated by local cinema-goers who tend to eat theirs before watching trailers. Each ice-cream costs £4 and there is no plastic wrapper – instead, you get a little paper napkin wrapped around the stick to catch drips, as per tradition.

The new lollies – some creamy, some icy – are part of a Fendi pop-up that sells, among other things, Fendi supermarket shopping baskets, yours for a tidy grand, and £600 T-shirts. There are 12 flavours, including mango and passion fruit, although the most popular flavour is hazelnut. When the air turns soupy, it’s lemon. The obvious choice, though, is granny’s cream, an unvarnished translation from the Italian “crema di nonna”, which is a sort of frozen custard. On one side, the double F logo is stamped with an edible dye in dark brown – some of the lollies just have a Fendi-stamped stick – so for the two minutes it takes to eat it you can parade your wares by licking the other side. If Fendi bags are built to last, the aim of this lolly is perhaps the joy of destroying its value.

I have eaten ice-cream more than anything else for this column, such are the ways people like to repackage it. Unstable, savoury, creamy nonsense a lot of the time. This, though, is proper, artisanal stuff – like a Wall’s Mini Milk but made from the cream of pampered cows from San Bartolomeo. It makes me nostalgic for sand, holidays and parts of Europe we will soon talk about with some distance.

It is worth noting that fans of minimalism do not shop at Fendi. At the most recent show, which took place in Milan last June, there weren’t just logos. There were logos on top of logos. There were logos on bags, of which some models carried three. No fabric escaped unstamped, such is the logic of Fendi. So, while you may see a posh lolly, Fendi simply sees a blank surface, waiting to be filled.