Bugatti and Parmigiani Fleurier make some of the most coveted objects of desire in the world.

Bugatti’s Aérolithe was one of the most advanced cars of its time and some of the most beautiful concepts created in the 1930s. Considered to be the pinnacle of the Bugatti’s contribution to the automotive industry, Aérolithe, the magnesium car made by Ettore Bugatti’s son, became a myth, a legend, and a phenomenon. This automotive monumental symbol of the pre-war Europe, had a short existence on the earth. Its brief passage was marked by some sketches and photographs.

The right ingredients to create a legend.

The mythical vanished vehicle is now celebrated by long-time partners Parmigiani Fleurier,  the Swiss brand of luxury watchmakers, and Bugatti, the French car manufacturer of high-performance automobiles, founded in 1909 in the then German city of Molsheim, Alsace by Italian-born Ettore Bugatti.

From retro-inspired designs to the most advanced modern technological achievements, the worlds of Bugatti cars and Parmigiani Fleurier’s watches have had a long and successful association. Parmigiani is once again infusing the amazing world of motor sports-inspired wrist wear with fascination and desire. Meet the Bugatti Aérolithe Performance watch unveiled at this year’s SIHH – Salon International de la Haute Horlogerie Genève.

An exceptional car deserves a spectacular watch: The result of a collaboration between carmakers Bugatti and Swiss watchmaker, Parmigiani Fleurier, this is one of a series of watches inspired by the famous Bugatti racing beasts. 2017 Bugatti Aérolithe Performance watch

“Aérolithe” is a Greek word meaning “meteor”, reflecting Parmigiani’s strong invocation of curves and lines of the mythical car from 1935. You can dive into the Aérolithe’s sea of secrets at The Cité de l’Automobile in Mulhouse, France, the biggest automotive museum in the world and the host for the largest and most comprehensive collection of Bugatti vehicles on the planet. During our last visit in Mulhouse, we had the chance to admire the Bugatti Veyron, one of the jewels of the collection, a supercar with technical expertise from the fields of aeronautics and astronautics.

Adrenaline is the only superpower that human beings have

This recent release developed with race professionals in mind is not intended to be a faithful recreation of the famous sketches of the Aérolithe car. It is a one-of-a kind tribute re-imagined by Parmigiani Fleurier’s founder, watchmaker and restorer Michel Parmigiani and the experts who assist him. The watch is also linked aesthetically to the Bugatti Chiron, the most powerful, the fastest, the most luxurious and the most exclusive production super sports car.

The case of this new timepiece is evocative of Bugatti design heritage, but the Bugatti Aérolithe Performance goes further than the most driver’s magic tools. As well as being inspiring to look at, the status item features a 41 mm case made entirely from titanium and finishes applied using laser technology.

When you think that these finishes are beyond the capability of conventional machining, you know you have the driver’s ultimate tool from a high-end brand.

“The experience gained from the Senfine Concept Watch proved priceless in achieving something so complex, with the technologies developed for one-off creations serving to benefit other timepieces,” explained the luxury manufacture from Fleurier, Switzerland.

Like a Bugatti Chiron supercar, this timepiece is designed to read your mind and your needs on the road. The owner will also have the chance to see the Bugatti’s current performances engraved on the bezel. He can use the chronograph function for speed calculations.

Climb on board of any Bugatti and you will have a moment of invincibility. There is no mistaking its true purpose – pure speed paired with the most comfortable ride. The striking dashboard and the Parmigiani Fleurier on the wrist will remind you about the laws of physics.

If you were to transform a Bugatti intro a watch, it would look like the Bugatti Aérolithe Performance, a high performance modular flyback chronograph.

It is a remarkable and radical chronograph, but only a few will ever get to experience it. Issued in a limited edition like all the Parmigiani Fleurier’s watches from the Bugatti collection, the automotive-inspired wrist jewelry offers new incarnations of the famous Bugatti spirit, doubled with up-to-date technology, and new versions of a classic design.

One of the captivating aspects of this watch is the PF335 calibre, a proprietary movement boasting the flyback chronograph module. The easily recognizable shape features the undulations and the water-drop lugs which is one the Parmigiani Fleurier’s signatures. The other unique characteristic of the 41 mm watch featuring hours, minutes, small second, date, chronograph, and flyback functions is the double tachymeter, which has km/h indications in red and mph in blue. The luxurious strap adorned with the diamond pattern is inspired by the embossed pattern on the Bugatti Chiron’s seats, and the deployant buckle is textured to match the dial.

The stylistic hallmarks of Parmigiani Fleurier include the Delta-shaped hour and minute hands with luminescent coating , the RED “1” numeral on the date and the double hand second at 9 o’clock. An observer will immediately recognize the volumes, the aerodynamic curves and the color palette, so evocative of the Bugatti’s repertoire.

Started in 2004, Parmigiani Fleurier’s Bugatti collection of horological objects gave birth to one of the world’s most imaginative timepieces. The Bugatti Type 370 created a stir at its launch and was followed by anniversary pieces: the Bugatti Mythe, Révélation and Victoire. The first Bugatti watch was given to car enthusiast Ralph Lauren. The Bugatti Atalante, Parmigiani’s first Flyback chronograph and the Bugatti Super Sport with 90° time display also made their way into the hall of fame.

Since its inception, Parmigiani Fleurier’s Bugatti phenomenal collection expanded year after year. We are confident we will soon see the entire collection in all its splendor in the major automotive museums of the world. Meet you at the Cite de l’Automobile!

2LUXURY2 partnered with the brand to write this article but every word is ours. 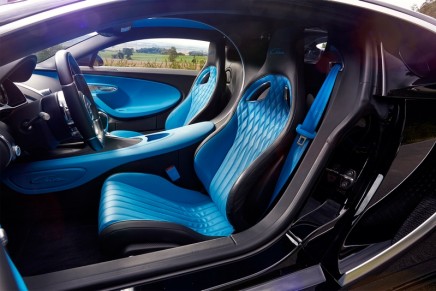 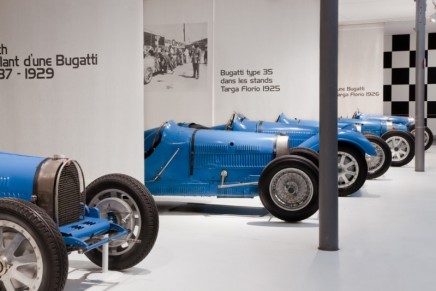 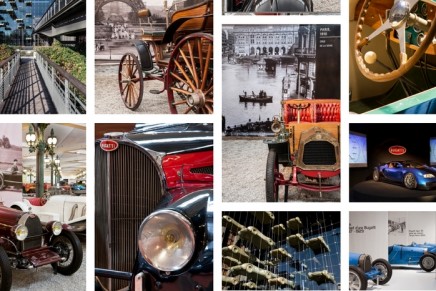