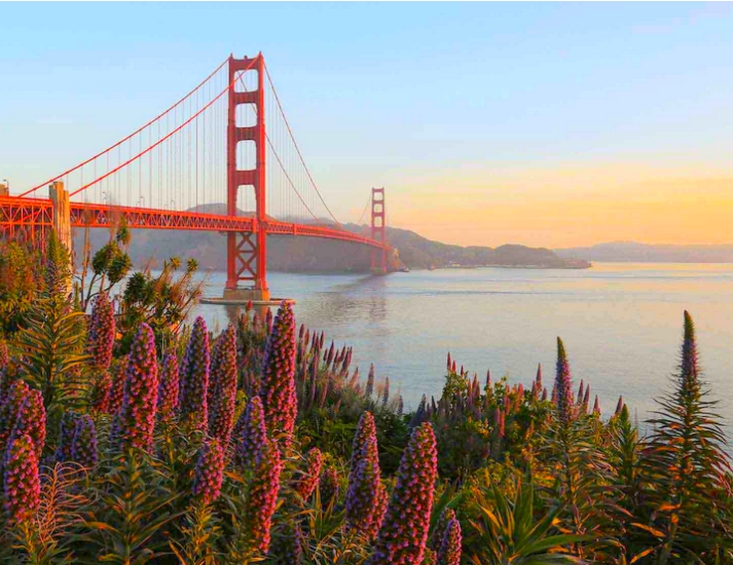 image: sftravel.com/ – the place to find out about all things San Francisco

At Jimmy’s Home with Cat & Tessa

The Maltese Cat had spent the afternoon at the Mechanics’ Institute Library in downtown San Francisco. He often used the private library to study or to do his work when he wanted to get away from his home. The library was one of San Francisco’s historic treasures. The Mechanics’ Institute was founded in 1854 and had been in its current location at 57 Post Street since 1910. Prior to the 1906 earthquake, it had over 10,000 members. Its membership was open to the public at a reasonable price. The Cat had purchased a lifetime membership.

He now drove to the Outer Sunset District to join Jimmy and Tessa at Jimmy’s large corner home. It was a house that the Cat had helped him to acquire. The house, located close to the Ocean Beach, was larger than the average houses in this district, with an imposing outdoor stairway guarded on either side by two stone lions. The previous owner was an old family friend of the Cat. When the owner passed, and his two sons could not reconcile the ownership, the house was put up for sale. The Cat knew that it was underpriced and suggested to Jimmy that he consider it. He knew his friend was well acquainted with real estate, especially in this part of the city. Jimmy Donnegan had made his money in construction, mainly remodeling houses in the Sunset and Richmond districts to look like European villas. A simple change in the stucco facades could add tens of thousands of dollars in increased resale value. He started out working with existing construction companies and acquired his own customers by locating houses that needed work due to either dry rot or termite infestation. He showed the potential customers what their house could look like, using sketches he had created of typical houses in the area. Years later, he used a laptop computer program to show how he could transform their houses. The results were startling. The customer could choose among French Empire, Neoclassical, or Mediterranean styles, or whatever struck the person’s fancy. Jimmy could make up a quick quote, showing how much more the house would be worth afterward. His Gaelic ‘Gift of the Gab’ and his Irish charm made him a natural salesman and through the 1990s he acquired a long list of customers, as well as a large personal wealth. Pretty good for an Irish immigrant who arrived in the United States as a young man with hardly any money.

The Cat was one of Jimmy’s most trusted friends. They met on a public tennis court and hit it off well from the beginning. Jimmy had been planning on starting his own construction company now that he had so many customers. The Cat talked him out of it, pointing out that his overhead would be so high in this regulated town that he would always be under severe pressure to acquire new sales regardless what the market was doing. With the luck of the Irish and his trust in the Cat’s advice, when the real estate market collapsed as the dot-com bubble burst in the year 2000, he was not scathed. Jimmy still found enough business to keep afloat since he had no overhead to speak of. No employees were dependent upon him and vice versa. Many of the construction companies in the area were hit hard and had to lay off their workers. Jimmy now had his pick of companies and workers to use to do the remodeling.

At the same time that Cat advised Jimmy not to create his own construction company, Jimmy was planning on taking up the sport of golf. He had come from a common background in Ireland and the sport of golf was out of his reach there. When he first arrived in California, directly from Ireland, he worked on construction jobs in Santa Barbara for the hotel magnate, Dale Helmstadt. One night, at a party, a fellow Irishman mentioned that there were far more Irish immigrants in San Francisco and that he could always find employment in the northern California city. His acquaintance set up an introduction for him with a small construction company in San Francisco and, after a successful interview, Jimmy moved and never looked back. He worked hard, saving his money. Now he could finally afford a rich man’s leisure like golf.

The Maltese Cat suggested he take up polo instead. After the first outing together, Jimmy was hooked. The Cat taught him the game and helped him buy some Argentine polo ponies. Because he did not start his own construction company, Jimmy had enough funds to continue to play polo during the real estate recession. As prices dropped, he found a distress sale of a small rural property in Sonoma County, north of San Francisco, which he picked up for a portion of its real value, and Jimmy constructed his own polo field there. Together with Cat, they created their own club of friends with which to play, without the complications and personality clashes found in other polo clubs in the area. Participation was by invitation only, and the chukkers they played gained a reputation for their fast pace and their exclusivity.

Now, Jimmy, Tessa, and the Cat sat together in the sunken living room. Jimmy had already mentioned the Boys Club dilemma to Tessa.
Jimmy turned to his friend, the Cat. “So what do make of it?”
”Hard to say. These boys are burning the candle at both ends, but they seem to never run out of funds.”
Tessa looked quizzical, and then she spoke up. “Donna told me once that the Boys Club had found a ‘gold mine’ at their jobs. Something about collecting dead accounts that nobody claims.”
The Cat reflected a moment and murmured, “Escheatment.”
¨Pardon?”
¨Oh, it’s called the Escheatment Process.”
Jimmy knew that the Cat had been a registered representative of the New York Stock Exchange for over 20 years and he knew a lot about banking and investments.
The Cat continued, “You see, you think you own your own money, but you really don’t. You think that if you have money in a bank account, it’s yours forever. Not necessarily so.”
Jimmy was perplexed and showed it.
“Tessa knows this. When accounts lie dormant for a certain period, the state has the right to claim the accounts, cash them in and use the money for whatever purposes they want.”
He continued. “It’s all legal. The problem is that whereas the time period for dead accounts used to be perhaps 15 years, today some states have reduced the waiting period down to 5 or even 3 years.”
“The state is hard up for money these days,” Jimmy chimed in.
“Exactly,” said the Cat. “But there are procedures to follow for this. The boys can’t just steal the money. It’s not that easy.”
“James bragged that he had found a way and all the others were doing the same at the other banks,” said Tessa.
“If that is true, it is going to be hard to prove, since I doubt very much that they would have left their trails about.”
The Cat ruminated. If what Tessa said was true, there would be nobody calling Cop. He knew that the financial institution had to give notifications before they impounded the money for the state. If, after repeated notices, the account was not claimed, there was very little chance of someone coming forward to claim it once the state had it. The state counted on this in order to keep the money. Even assets that were not liquid, such as jewelry in safety deposit boxes, were sold off at auctions, sometimes for a price far below their value. If someone did come forth later with a substantiated claim, the state was only obliged to refund the proceeds of the sale, not any claimed or real value of the items.
The Cat churned the idea over in his mind. But how was the Boys Club taking possession of such accounts? How did they cover their tracks? How could they use the money without calling attention to it? That would explain how they are living so lavishly.
The Cat didn’t want to explain too much in front of Tessa. Certainly, she was not supposed to know what he had in store for the boys.
Jimmy broke his train of thought.
¨I’m glad I own real estate instead. Can’t take that away.”
“You think so? Try not paying property taxes. We all think we own everything when, in reality, we don’t.”
The Cat’s thoughts went back to the Boys Club and he thought aloud, “This gives me a new avenue to explore. Perhaps it will indeed explain more.”
“Wish I could help,” said Jimmy.
The Cat was thinking to himself and muttered askance, “Oh, you probably will.”
On his way home from Jimmy and Tessa’s house, the Cat continued to think about what he had just heard. The idea intrigued the Cat. They must have a computer expert in their operation. The Cat had several, and his were good. Young kids who lived and breathed computers. The Zapp Kids. They were the best in a growing crop of San Francisco techno geeks. They had won enough awards to prove that. He would match his group up against any other. Still, the thought that James Van Houten and his gang of crooks were successfully withdrawing money from their companies sparked his competitive fires. He must first find out how they are doing it. Then he could formulate a plan.