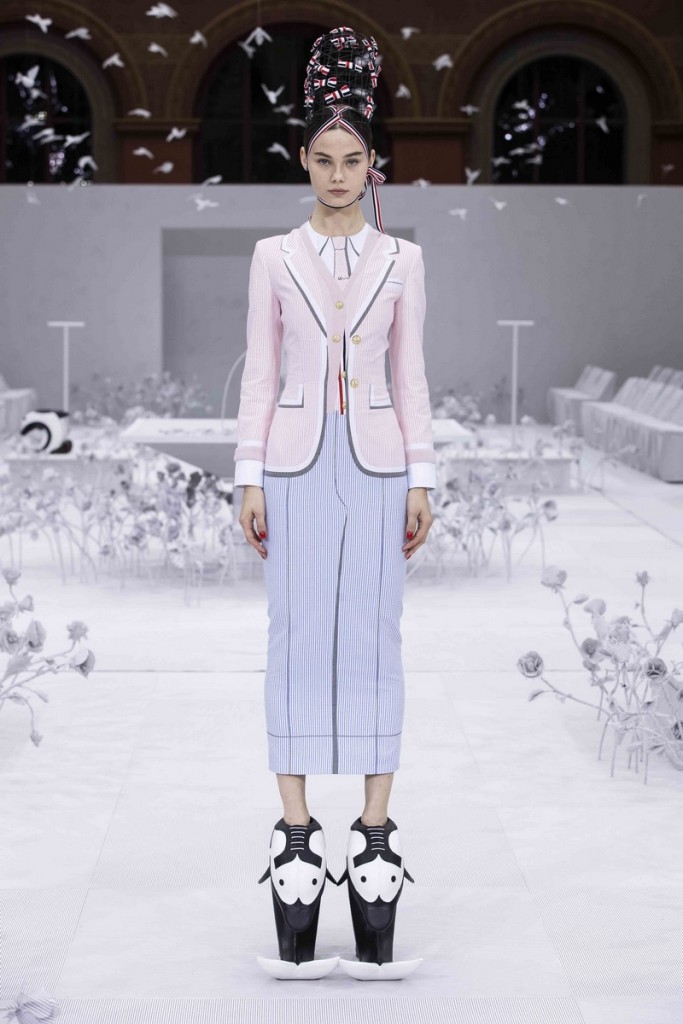 This article titled “These boots weren’t made for walking: dolphin-shaped ‘pedestal shoes’ immobilise models” was written by Alyx Gorman, for theguardian.com on Tuesday 1st October 2019 02.51 UTC

What happens when a dolphin, a football and a plinth get spliced together in the style of The Fly? At Paris fashion week the conceptual American designer Thom Browne answered the question no one had thought to ask with four pairs of vertiginous “pedestal shoes” in the shape of a leaping dolphin, stabilised by glossy black waves.

Models required assistance to lower themselves into the surreal creations, and stood motionless throughout the show, granting new meaning to the expression “footlocker”. The fashion publication WWD reported that the heels were so “harrowing” one model had to extricate herself from them before the show finished.

Shoes so extreme they rob their wearers of mobility (and dignity) fitted the show’s pre-French Revolution theme. High heels reigned, particularly for men, in the Rococo era. But the Sun King probably would not have approved of Browne’s pairs – at the time, heels were a statement of social standing and the king had the highest pair in the room.

At Browne’s spring 2020 menswear presentation, models were also motionless in their kicks – though those resembled beach balls rather than marine wildlife.

Like the garden of white flowers, seersucker-covered pannier skirts and wire beehive headdresses covered in red, white and blue bows, Browne’s shoes are purely for show. But that doesn’t mean dolphins won’t have a flipper in Browne’s retail collection. They appeared as appliques on relatively wearable seersucker jackets – and a small sports bag also assumed dolphin form.

This follows Browne’s $3,970 dog-shaped “Hector” bag, part of a menagerie of animal handbags that also includes an $1,800 Loewe elephant and Judith Leiber’s enduring crystal bird clutches ($4,000 and up).

Whether you view these fauna flourishes as madness or a joyful element of fashion’s fantasy, no model should have to fill out a worker’s compensation claim stating “ankle injury due to fall from dolphin shoes”.