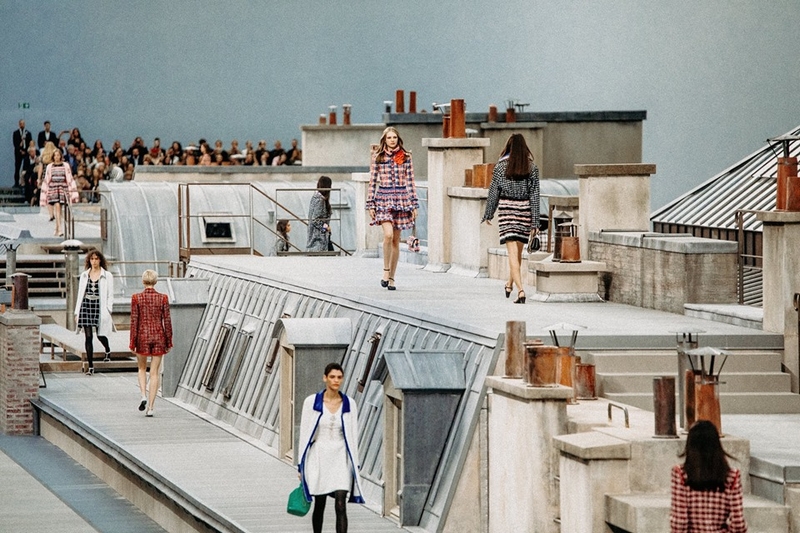 This article titled “Streamlined Chanel collection shines in Paris despite catwalk crasher” was written by Hannah Marriott in Paris, for The Guardian on Tuesday 1st October 2019 16.16 UTC

Gigi Hadid’s position as head girl of the Instagram supermodel set was confirmed on Tuesday when she removed an interloper from the finale of Chanel’s fashion show in Paris.

The prankster, the YouTube comedian Marie Benoliel, wore a monochrome tweed suit – a signature of the Chanel brand – and darted on to the catwalk before strutting between the models. She blended in so well that the venue’s security guards appeared unable to identify her and it fell to Hadid to face up to the trespasser and shoo her off the runway.

On Benoliel’s YouTube channel, where she goes by the name Marie s’Infiltre, her biography reads: “Marie infiltrates everywhere, to better reveal the comic reality that is hidden in the news!” Earlier in the week she infiltrated an Etam presentation where she again passed undetected for some time as part of the show by wearing silver underwear. After the Chanel invasion she posted a picture of herself with Hadid online.

A Chanel spokeswoman said the infiltrator had taken them by surprise but that “this is not the first time that she has done this”.

“We are not going to make a drama out of it,” she added. “We would have preferred if it hadn’t happened.” The woman was “escorted to the exit by our security personnel afterwards”.

Speaking after her stunt, Benoliel told the Guardian she had always dreamed of becoming a Chanel égérie, or muse, adding: “The suit I was wearing on the catwalk actually belongs to my mom and she has been wearing it since I was born. Chanel is eternal. My tribute was a desire to take part in this eternity for a few minutes.”

She said her comedy was “an exhaustive satire about our society”. Over the past four years she has produced more than 100 YouTube videos “where I immerse myself in public events and situations”.

The goal, she said, was to “show how funny some situations and sometimes extreme behaviours are … I am not making fun of people. I am pointing out how silly some people can be when they lack distance and thinking.”

On her exchange with Hadid, she said: “Gigi was quite nervous and reacted quite aggressively to me. She clearly did not understand my comic approach. At some point I thought she was going to pull my hair and yell as if we were schoolgirls.

“Gigi is obviously sublime and a fashion icon. I understand her reaction somewhat and continue to love her in spite of that.”

When asked how she accessed the Chanel venue, which had tight security, she said: “Sorry, I am a lady and a lady can’t reveal her tricks I am afraid.”

The incident did not derail the show, which was the first ready-to-wear collection produced entirely by Karl Lagerfeld’s successor, Virginie Viard. Viard was Lagerfeld’s longstanding “right hand”, first at Chloé and then at Chanel, and took over at the brand after his death in February.

The set, assembled within the soaring art nouveau arches of the Grand Palais in Paris, was a 330-metre recreation of the city’s distinctive peach-coloured Lutetian limestone and zinc rooftops. Chanel’s sets are always spectacular – Lagerfeld’s famously consisted of aeroplanes and entire supermarkets – but this was evocative in a more understated way. It came with realistic signs of life: the creamy stone was infused with a smoky grey patina while the “zinc” (actually painted linoleum) was tarnished.

Perhaps the most surprising part of the aesthetic, given that this was a spring/summer show, was that so many models wore black opaque tights. Hemlines were short, with A-line and puffball skirts cut to the mid-thigh, a departure from the longstanding midi hemline trend still seen at many of the other fashion houses.

There was a kaleidoscope of tweed and boucle, from the opening look – a black suit jacket with short black kilt – to sturdy pink and red romper suits. The shoes were commercial and wearable, comprising patent flat and block-heeled sandals and the ever-popular cream and black Chanel two tones. Another standout section featured graphic, block-printed silk skirts, suits and jackets with “Chanel” in white block capitals.

Viard has already shown resort and couture collections for Chanel, thoughready-to-wear tends to have the most impact. So far her output has been interpreted as quieter than the pop-art stylings of her predecessor. Some have seen Coco Chanel as the dominant influence in Viard’s pared-back take on house codes.

Like many of the shows this season, Viard presented a simplified way of dressing, a heartening riposte to the frequent fashion brand impulse to pile on the merchandise on the catwalk. That aesthetic – with models often wearing many-layered outfits and carrying more than one handbag on the catwalk – can feel queasily like stuffification for shoppers increasingly tuned in to concerns about sustainability.

The chimneys and roof windows in the set were found at flea markets, according to notes distributed to showers. Chanel is “committed wherever possible to recovering, recycling and/or reusing materials and elements used in the set design for the shows”, a spokesperson said.