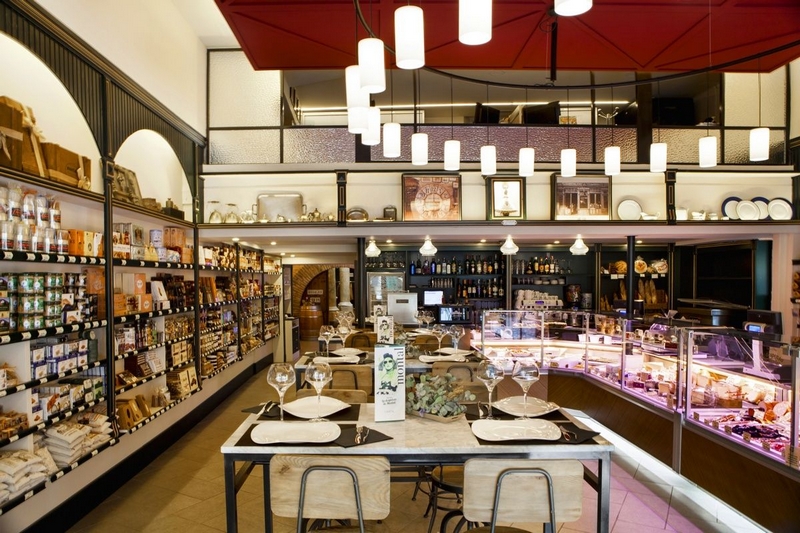 This article titled “10 of the best delis for traditional food and Christmas treats” was written by Guardian writers, for The Guardian on Thursday 13th December 2018 12.04 UTC

Francis Ford Coppola is just one of the many fans of this second-generation purveyor of regional delicacies from around Emilia-Romagna. Metal hooks, once used to cure hunks of mortadella from the rafters, still decorate the ceiling and the umami-heady funk of aged Parmigiano-Reggiano that perfumes the shop. Since opening in 1932, in Bologna’s Quadrilatero, a labyrinth of medieval streets, the store stocks some of the best charcuterie in town. When owner Giovanni Tamburini isn’t rubbing elbows with local politicians over plates of superlative tortellini, he plays in a rock band named Ciccioli Ciccioli, which translates as “pork cracklings” in local dialect. During the month leading up to Christmas, Bolognese come here to stock up on bottles of bubbles and baskets of gourmet goodies.
• Via Caprarie 1, tamburini.com
Diana Hubbell

The Rialto neighbourhood remains integral to the city’s resilient local population and, on Christmas Eve morning, Venetian families arrive to peruse the stalls spreading through the fish, fruit and vegetable markets to do their shopping for the traditional vigilia dinner that evening. The one store everyone stops off at is Antica Drogheria Mascari. Close to the Rialto Bridge, on the Calle degli Spezieri (street of the spice merchants), where exotic riches from across the world have been traded for 700 years, Mascari is more than just a spice emporium. Every inch is packed with goodies: rare balsamic vinegar, truffles and dried mushrooms, colourful spices, herbs and teas, preserved fruits, chunks of hazelnut-stuffed chocolate. The Mascari family opened the store in 1948 and Mama Sonia is still behind the counter, assisted by her sons Gabriele and Gino, who have extended the store with a cantina, showcasing a stellar collection of Italian wines. Christmas specialities? Choose between the classic panettone (€13.90) from Milan or traditional Buranelli sweet, hard biscuits – baked on the lagoon island of Burano and traditionally dipped in sweet vin santo (€2.90).
• Calle degli Spezieri 381, San Polo, imascari.com
John Brunton

One of Porto’s old-style grocery stores (mercearias), Comer e Chorar por Mais has been filling larders with traditional Portuguese produce since 1912. Floor-to-ceiling shelves of port line the walls but it’s the foodstuffs in this family-owned store that will have you “crying for more” (chorar por mais). No festive table in Porto is complete without a spherical slab of amanteigado (€23.50 per kilo), a soft cheese eaten with lemony sponge cake. Dried and crystallised fruits mark another must-buy, with pumpkin (€11.95 per kilo) among the more unusual flavours. Carnivores shouldn’t leave without a fat slice of pig’s neck (€24.50 per kilo), which is marinated in wine, garlic and laurel, before undergoing a serious smoking. And Porto’s iconic Bolhão market is on the doorstep, though it is currently under renovation.
• Rua Formosa 300, comerechorarpormais.com
Oliver Balch

Founded in 1919, this family-run business is packed with history, tradition and atmosphere – as well as sausage, wine and cheese. The focus is on artisan-produced, high-quality local products – and the Aragon region, of which Zaragoza is the capital, offers rich pickings. Shop for chorizos, a wonky wheel of Tronchón goat and ewes milk cheese, truffles from Teruel, jars of foie and pate and curious stews (quail and pochas beans, perhaps?) and beautifully packaged fancy sweet stuff (the chocolate-covered glacé fruit indulgence Frutas de Aragón is a must). All Spain stocks up on the hoofed legs of jamón hanging over the counter, and boxes of nougatty turrón in the run-up to Christmas – try the Turrón al cava Puyet, or the nutty Aragón variation guirlache. A vast bodega stocks unusual wines from far and wide but the selection of wines from the four local D.O.s is unparalleled: Campo de Borja, Calatayud and Carinena – all renowned for garnacha/grenache – and mountainous Somontano, famed for chardonnay and gewürztraminer. You can eat and drink what you buy on site; try a degustación at La Despensa, an attractive, laid-back seating area; or step into Montal’s spectacular restaurant set in an adjacent 16th-century Renaissance palace and dine richly in style.
• Torre Nueva 29, montal.es
Sorrel Downer

Glowing seductively on a chamfered corner of the smart Eixample neighbourhood, family-run Queviures Múrria is one of the last of Barcelona’s truly historic shops. Founded at the turn of the 19th century, it bursts with modernist flourishes in the carved wooden shelving and inked-glass advertisement panels bearing designs by Catalan artist Ramón Casas. The chiller cabinets groan with cheeses and charcuterie against a backdrop of extra virgin oils, champagne and cava (at €8, the house cava – light and fruity, and made with chardonnay – is a bargain in these lofty surroundings). On Christmas Eve, however, the queue stretches out of the door for the traditional handmade wafers known as neules, and boxes of moscovitas (crunchy, chocolate-drenched biscuits, €14).
• Carrer de Roger de Llúria, 85, murria.cat
Sally Davies

Launched in 1930 by Elsa and Paul Käfer, this third-generation family business is where well-heeled Bavarians go to pick up baked goods and prepared dishes for holiday parties. The posh delicatessen in Schwabing boasts more than 800 types of wine and 350 cheeses, not to mention an assortment of charcuterie and seafood. If the selection seems overwhelming, the staff are happy to offer recommendations. Both the prices and the quality are exceptionally high, meaning locals tend to save their shopping splurge for the festive season. During the rest of the year, the small gastronomic empire does a brisk business in upscale catering. The family is also responsible for the only Oktoberfest tent where the guests are more likely to be drinking champagne than lager.
• Prinzregentenstrasse 73, feinkost-kaefer.de
DH

In an early-20th-century art nouveau building on Nevsky Prospect, Yeliseyev Merchants Food Hall is as lavishly decorated as some of the city’s palaces – with gold mouldings and stained-glass windows. Towers of chocolates and sweets (with a price tag to match) add to the luxury setting. There is a patisserie and confectionary section, a wine corner, a cafe, and a meat-and-cheese counter. Since Russia introduced sanctions on western meat and dairy produce in 2014, only Russian cheese can be purchased here; it doesn’t boast a particularly good foodie reputation but might make a good curiosity purchase. For some Christmas spirit, check out the Nutcracker-themed window display and get mulled wine to take away (from £5), and festive chocolates – with Russian Santa or Father Frost designs – are popular as they were a traditional children’s gift even during the Soviet times (£6). It’s also right across the road from the Alexandrinsky theatre and a 15-minute walk from the Winter Palace.
• 56 Nevsky Prospect, kupetzeliseevs.ru
Sasha Raspopina

This small, family-owned local chain has several locations in Prague and is an oasis for homely Czech food in an often-overpriced and tourist-crowded city. The look of the shops is rather pedestrian but don’t let that drive you away – the simple canteen look is a part of the charm for the locals, who like to pop in for cakes, bread and jams or get snacks to eat at one of the stand-up tables by the windows. In the fresh food section, go for the traditional open sandwiches, chlebičky: bread rolls topped with various pates and spreads (try the creamy carrot and shredded beetroot ones). Also, search out cold cuts, cheeses, and traditional pastries in the shape of little wheels (liberske kolače), which are filled with fruit, and don’t miss melt-in-the-mouth cottage cheese and poppy-seed paste. You can even assemble a true Czech Christmas hamper by picking up raspberry and buckthorn jam, cherry and liqueur chocolates, traditional chocolate filled waffles and a bottle of local alcohol, such as sweet Republica rum or herby Becherovka.
• 9 Vodičkova Street, liberskelahudky.cz
SR

One of the oldest food shops in Paris, with a handsome facade unchanged since the Belle Epoque, À la Mère de Famille is not strictly a deli, but a gorgeous time capsule of a sweet shop. Its antique cabinets are laden with nostalgic French candies; from chocolate orangettes (candied orange peel dipped in chocolate) to the famous calissons of Aix-en-Provence, a paste of crystallised melon and almonds covered in icing. French families are known to bring out impressive displays of “13 Desserts” after dinner; a Provençale tradition that entails arranging 13 separate rows of candied fruits, biscotins (fancy biscuits), marzipan, nougat and other sugary delicacies on a tray. Stock up at the 250-year-old family-run shop and don’t forget the sweet wine for Santa’s night cap and a selection of pâte à tartiner (chocolatey spreads) for the breakfast table.
• 35 rue du Faubourg Montmartre, lameredefamille.com
Vanessa Grall, author of Don’t Be a Tourist

In a city that’s constantly changing, food stalwarts are hard to come by but Schaller and Weber, founded in 1937, remains an Upper East Side institution. The German butcher-cum-specialty food store is one of the last vestiges of old Yorkville: a New York district that is historically Central European. And it still serves some of the finest charcuterie, smoked Bavarian Rauchkäse cheese, and bone broth in the city. Come Christmas, pick up imported marzipan ($6.99). Of course, nothing in New York has remained entirely impervious to change: next door, the owners have opened Stube, a trendy, if tiny, sandwich-shop serving Korean-fusion kielbasa and other high-end lunch fare.
• 1654 2nd Avenue, schallerweber.com
Tara Isabella Burton