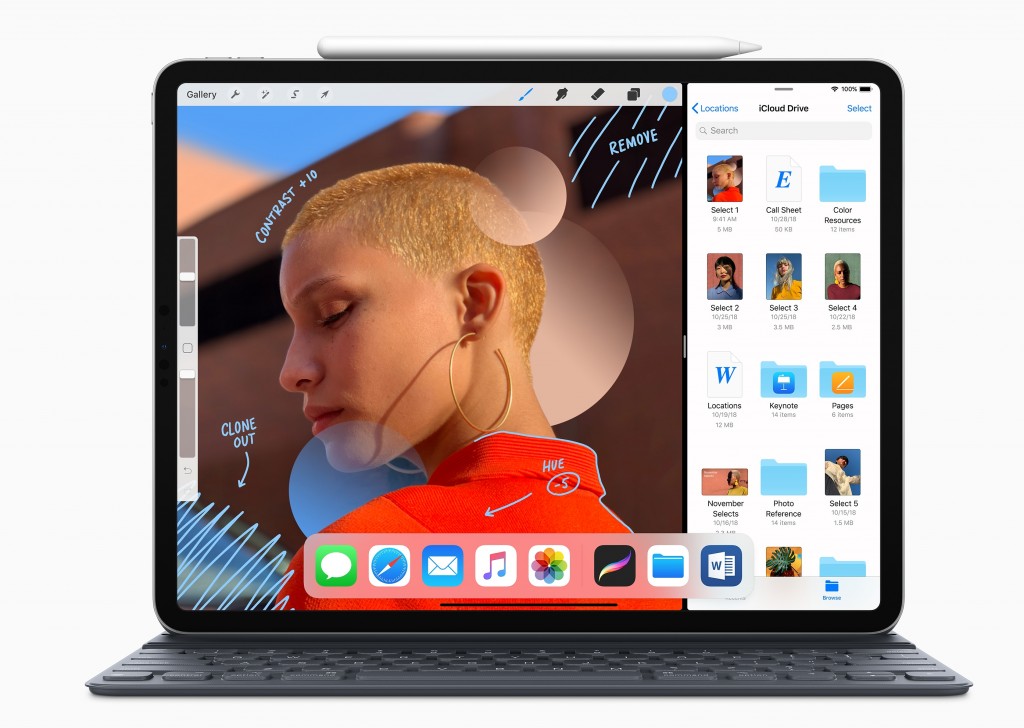 This article titled “Apple 12.9in iPad Pro review: bringing back the wow factor” was written by Samuel Gibbs, for theguardian.com on Wednesday 12th December 2018 06.00 UTC

After eight years of fairly boring design revisions, the new 2018 iPad Pro finally breaks the mould, restoring the wow factor the original commanded way back in 2010.

That’s because the new iPad Pro is practically all screen. The home button is gone, replaced with uniform bezels around the edges and a thin, squared-off aluminium body reminiscent of the iPhone 4’s gorgeous design.

Fire up the screen and you are greeted with a beautiful display that is arguably the best LCD on any device, let alone a tablet. The question is whether you share Apple’s vision of what the next version of a computer should be and whether a large screen running a mobile operating system cuts the mustard.

There are two starting with a slightly bigger 11in iPad Pro but it is the 12.9in version that is the most impressive and the one reviewed here. Where the previous 12.9in was fairly heavy and unwieldy, the shrinking of the body around the large screen has made it feel a lot smaller and easier to handle.

The new tablet is a noticeable 49g lighter, 1mm thinner, 19.4mm shorter and 5.1mm narrower than its predecessor. At 631g and only 5.9mm in thickness the 12.9in iPad Pro is thinner and lighter than most of its productivity tablet competition, too. The 12.3in Microsoft Surface Pro weighs 770g and is 8.5mm thick, while Google’s 12.3in Pixel Slate is 726g and 7mm thick.

The four speakers in the sides are loud and clear, putting most other tablets to shame. The industry-standard USB-C port replaces the old Lightning socket for power and connectivity. The new Apple Pencil magnetically attaches to and wirelessly charges from one side of the tablet, while the smart connector has been moved to the smooth aluminium back of the tablet.

Apple says the 2018 iPad Pro is more powerful than the majority of mobile PCs sold in the last year, and I can well believe that, but I found it difficult to find any apps that actually use all that power.

Affinity Photo was super-smooth even in complex image manipulation tasks and games were fluid but neither felt blisteringly faster than the previous iPad Pro.

Battery life was excellent. Using it as a work computer in the Smart Keyboard Folio, browsing the internet, reading PDFs, using a couple of web apps, writing this review among others, editing photos, listening to Spotify for at least five hours via Bluetooth headphones, being buried in email and using three different chat apps all day, the 12.9in iPad Pro made it from 9am to 5pm with just under 50% battery left.

After an hour of video on the train home, a bit of shopping and browsing in the evenings, the iPad would arrive the next day at work with around 35% battery and then make it until lunchtime.

If you can get all your work done on an iPad Pro it will far outlast any Intel-powered laptop, let alone a tablet, but it takes 3.5 hours to fully charge using the included folding 18W USB-C charger when not in use. It will charge faster from a more powerful USB-C laptop charger.

Apple’s Face ID recognition system replaces the Touch ID fingerprint sensor, squeezed into the bezel on the left edge. It works very well, despite the wider variety of angles you hold a tablet at compared to a smartphone.

Only occasionally did I have to intentionally lean over the tablet to get it to see my face, or move my hand from blocking the camera when held in landscape. It feels far more natural than reaching for a fingerprint scanner on a tablet.

If docked in the Smart Keyboard you can simply double tap the spacebar or any key to unlock and dismiss the lock screen taking a leaf out of Microsoft’s excellent Windows Hello system.

The iPad Pro runs the same version of iOS as previous iPads and iPhones, with its large selection of third-party tablet apps, including great text editors and art programs, plus every media consumption app you could want. Digital comics look particularly good on the big, bright and brilliant screen.

The side-by-side split-screen apps work well on the 12.9in screen, which is big enough to stay productive with half the screen per app. But when it comes to genuine productivity, iOS is often the thing holding the iPad Pro back.

You can’t access removable storage, apart from to import photos. You can hook up a monitor but only use it beyond simple mirroring with certain functions such as presentations. There are many of these little irritations that aren’t a problem on macOS or Windows 10.

The iPad Pro can do most things you would on Mac or a PC but you might need a hack or workaround. Fewer of these tricks are needed each year but one thing that hasn’t improved is Safari.

It is a very good mobile browser but it isn’t desktop class. That’s fine for most things but trying to use a complex web app, the kind often needed when getting work done such as a content management system or similar, can be like pulling teeth.

Perhaps the web app should be better designed but when it is primarily used in desktop-class browsers with mousing and multi-click support, the reality is that the tablet has to be able to handle the app a rather than the other way around. Particularly if it wants to be your only computer.

Apple’s gesture navigation is second to none. All your favourites from the iPhone X are there. A short swipe up from the bottom reveals the dock, from which you can grab an app and go split screen. Swipe up further to reach the home screen, or swipe up and hold to go to the task switcher. Switch between apps by swiping across the gesture bar at the bottom.

They are all incredibly smooth, feeling natural and intuitive for an all-screen device.

Apple offers a new Pencil stylus costing £119, as the old Pencil is not compatible with the new iPad Pro. Gone is the daft-looking Lightning connector that you plugged directly into the iPad. It is replaced by magnets to attach it to the top of the tablet and wirelessly charge it – ready for action when you need it.

It stayed mounted fairly well but can be knocked off easily when pulling the iPad out of a bag unless you’re careful.

Double tap the barrel of the Pencil with your finger to switch between drawing and erasing, or similar. It’s app dependent, so your favourite app might not yet support it, but it works well in Apple Notes. It’s not quite as good as a button but it’s better than nothing.

While the iPad Pro can be used with just about any Bluetooth keyboard, Apple sells a £199 Smart Keyboard Folio for the new iPad Pro, which acts like a case and clips the tablet and smart connector via magnets.

It costs a lot but worked very well. I could instantly touch type on what feels very much like the keyboards on the current generation of Apple laptops.

It’s sealed, so no debris is going to get under the keys, and it holds the tablet securely at one of two angles. It works great on a desk and is OK on a lap, feeling more stable than the previous generation of Apple Smart Keyboard.

The iPad Pro comes in two screen sizes, four storage options and two variants with and without 4G connectivity.

For comparison, Google’s Pixel Slate starts at £549 and the Microsoft Surface Pro 6 starts at £879.

The new 12.9in iPad Pro is a remarkable piece of technology that rekindles that wow factor for me that most technology has lost. But it is exceedingly expensive if it is considered just a tablet.

Apple claims the iPad is the evolution of the computer, and you can certainly get work done on it for double the length of time between charges than its competitors.

But because of the intentional limitations of iOS, to get work done you need to make adjustments and use little hacks and workarounds you simply don’t have to on a desktop operating system. And really for something that costs upward of £969 it should adapt to you rather than the other way around.

Yes, the iPad Pro is a computer but it’s not the best computer. It is the best, most desirable mobile tablet, and you’ll want one if you see one. But when the 9.7in iPad costs just £319 and works great for watching video, whether you should spend £769 for the 11in or £969 for the 12.9in version really comes down to how much you’re willing to spend on a luxury item. Because that’s what the iPad Pro is: a beautiful, luxury piece of kit.

Cons: very expensive, iOS limitations, no kickstand without case, can’t fully replace a computer for everything