In the Jardin des Tuileries, a surrealist vision of Heaven on Earth plays gallery to the traditional tools of the artisan for Virgil Abloh‘s Louis Vuitton Men’s Fall-Winter 2020 Fashion Show. 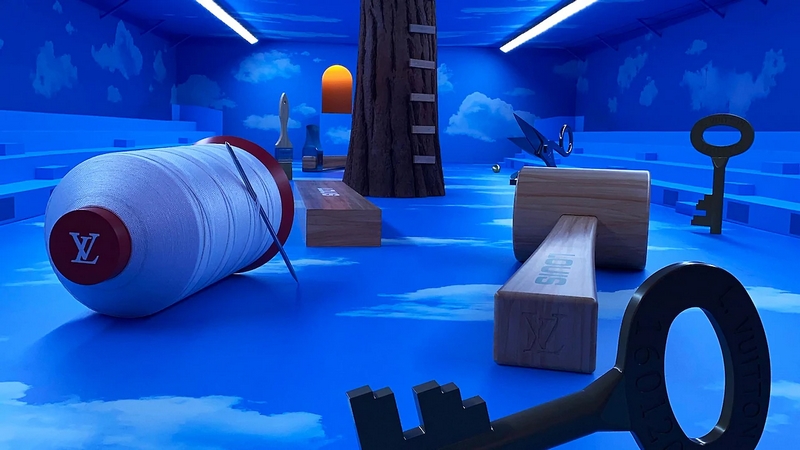 This article titled “Virgil Abloh takes Louis Vuitton into wonderland” was written by Lauren Cochrane in Paris, for The Guardian on Thursday 16th January 2020 17.35 UTC

Virgil Abloh, the artistic director of Louis Vuitton menswear, titled his autumn/winter show “Heaven on Earth”, but “A dream come true” might have been an alternative.

XXXXL versions of household items such as a paintbrush, scissors, safety pins and a spool of thread dotted a space in the Tuileries gardens in Paris, which was painted to look like a blue sky with clouds. The centrepiece was a life-size tree trunk growing up into the ceiling. Think Alice’s Wonderland circa the “drink me” scene, by way of Rene Magritte’s paintings. Some 1200 audience members – including model Bella Hadid – had already had a preview of this dreamlike mood: a wall-size clock running backwards served as their invite.

This is Abloh’s fourth show for Louis Vuitton, who in 2018 became the first designer of colour to be appointed at a significant luxury brand. There’s a happy disconnect between the inspiration behind his sets and most of what the models wear. If the former let Abloh’s imagination run at full tilt, the other is all business. For this collection, that was taken literally.

The show began with a suit and workwear was central – albeit workwear that spells out success through conspicuous logos. The LV of Louis Vuitton as well as the famous monogram were used liberally on work bags, suits and coats. Some pieces were more statement than office. A particularly clever design was a shirt lasercut like guipure lace with the shapes of the monogram.

Louis Vuitton is one of a number of luxury brands that are still not fur free. A fox fur coat with a giant LV logo on the back was straight out of a late-1990s bling moment. The series of suits with cloud prints at the end of the show brought everything back full circle.

Abloh’s shows are an assault on the senses and for music, the designer – who has also worked as a DJ – collaborated with Juan Atkins, the DJ and musician known for his role in the development of techno in 1980s Detroit. Atkins brought his Cybotron project to Paris – he overlooked Abloh’s show in a booth with two other musicians, both in masks similar to those worn by French electronic duo Daft Punk. The electronic music clashed with the homespun vibe of the set but – as all things in Abloh’s world – that was probably the point.

The show notes explained that a childlike perspective was part of the thinking behind the show. “Gazing at the world through the optics of a child – of an adolescent or a young man – is tantamount to first impressions”, they read. The suits are intended as a twist on corporate wear: “don’t let your day job define you”, advised Abloh.

LVMH – Louis Vuitton’s parent company – will hope this show starts its new decade on a positive. The brand’s last moment in the spotlight was when LVMH president Bernard Arnault met Donald Trump for the opening of a Louis Vuitton factory in Texas in October.

There was push back from the broadly liberal fashion industry. The brand’s own creative director for womenswear, Nicolas Ghesquiere, protested with an Instagram post on his personal account that read: “I am a fashion designer refusing this association #trumpisajoke #homophobia”. Grab Your Wallet – a group that asks consumers to boycott brands associated with Trump – added Louis Vuitton to its list. Yet only weeks after this controversial meeting, however, Louis Vuitton was named most valuable luxury brand for 2019, with 14% year-on-year growth.

Thursday also featured the show for Givenchy, another storied brand owned by LVMH. The collection was inspired by India’s Yashwantrao Holkar II, the 14th Maharajah of Indore who befriended the likes of Eileen Gray and Man Ray in Paris in the 1930s.

It featured sharp suits, embroidery and, perhaps surprisingly for such a rarified brand, latex polonecks. Clare Waight Keller, Givenchy’s Artistic Director who designed the Duchess of Sussex’s wedding dress, said that the material appealed because, like the finest of fabrics, it has to be cut bespoke. “The fact that there is this couture element to something so perverse is so interesting,” she said.