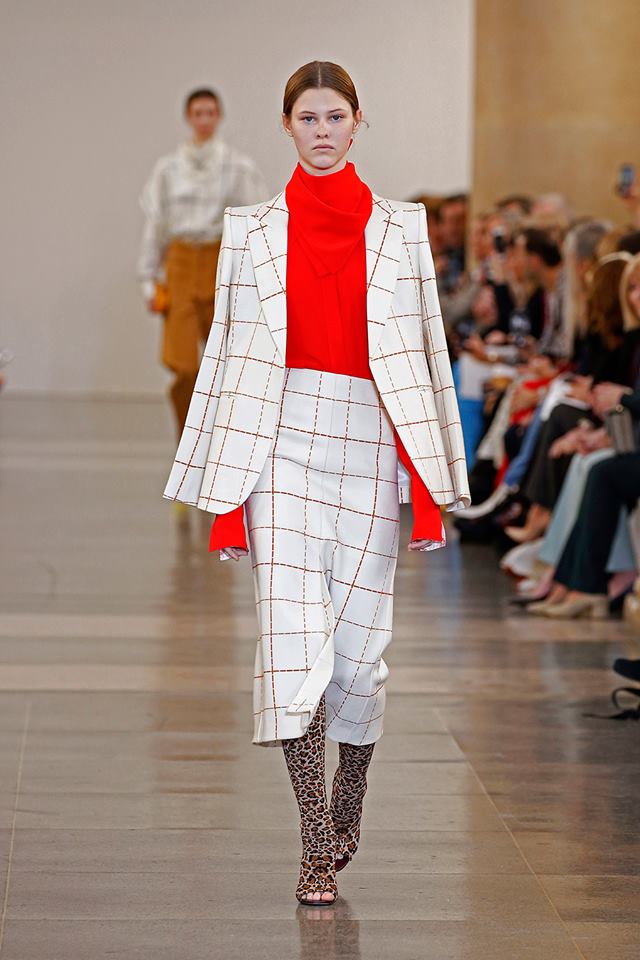 This article titled “Victoria Beckham’s naughty side returns at London fashion week” was written by Jess Cartner-Morley, for The Guardian on Sunday 17th February 2019 13.35 UTC

A decade at New York fashion week transformed Victoria Beckham from a pop star into a serious fashion designer. After six months back on the London catwalk, she is again in touch with what she calls her “naughty side”.

In her second London show, Beckham flirted with a return to the body-conscious silhouette with which she made her name as a designer. In recent years, she has distanced herself from curvy party dresses in favour of fluid skirts, chunky knitwear and tailored coats.

Related: Victoria Beckham: ‘You have to be quite controlling’

At her Sunday morning show at Tate Britain, dresses still fell to below the knee, but they hugged the waist and bottom before falling into soft pleats. “She’s a lady, but she’s not particularly ladylike,” Beckham said of the woman she imagined wearing these clothes. “Or maybe she’s ladylike but not really a lady – whichever way you want to look at it, she’s got a bit of a naughty side.”

There was plenty of leopard print (“women can’t help themselves around leopard”), some deeply plunging necklines, and heels were worn with every look. “It’s actually the first time ever that we’ve only shown high heels in a show,” said Beckham at a preview. “I do love how a heel elongates everything. It really finishes off the silhouette.”

But Beckham knows pretty, flattering clothes are not enough to please a fashion week audience. In fact, any collection that is too obvious in its pulling power goes down like a ton of bricks with this crowd. So the “celebration of the inherent femininity of dresses”, as the show notes described it, was seasoned with unexpected elements to keep things a little off kilter.

A tweed blazer and pleated black wool trousers were finished with a bright yellow shoe, “like a Post-it note”. There was “a pinch of the 70s” in saturated tomato red worn with a waxy lavender, in chain prints mismatched with windowpane checks, in the silk scarves (“foulards”) that were wound around the necks of the first three models, and in the pointed shirt collars. Beckham took to her catwalk in a pointed-collar shirt with dramatic full-leg black trousers and a cropped sweater. Her choice of show-day outfit, shrugged the designer, was usually a matter of “whatever is left over that no one else is wearing, that fits”.

Of course, Beckham’s embrace of looser, less strictly tailored clothes over the past few years was never just about a skirt silhouette. It was a look that signalled a message about her brand, telling the world this new version of Victoria Beckham was less tightly wound, more relatable, more woman-friendly than the Posh Spice one. Next month, Beckham will bring this personal brand to a wider audience with launch of her YouTube channel.

“It’s what people watch nowadays, right? It’s what my kids watch. It’s the platform that feels the most exciting at the moment,” said Beckham of why she is adding YouTube to an already prodigious Instagram output. “What I do on YouTube is going to be different from Instagram. It’s a lot more documentary style – on the road with me, sort of thing. Sometimes it’s a bit too documentary style, to be honest. We’ve had cameras around all the time in the run-up to the show and sometimes I look at the footage and wish I’d put a bit more makeup on. But you can’t be too vain about it.”

For her second London fashion week outing, Beckham scaled up her show from Mayfair gallery to Tate Britain. “More guests, more looks, and in a truly iconic venue,” she said.

She is yet to commit to viewing the move from New York to London fashion week as a permanent one, preferring to monitor which serves sales better. “But I really enjoy being here. It’s a luxury to be able to do all our last-minute show prep here, where we have two ateliers on hand. And it’s so nice being here with the family. But we are still taking it one season at a time,” Beckham said.