Santos-Dumont 2019 is an homage to the first Santos de Cartier watch.

“I fly to escape society and think.” – Alberto Santos-Dumont. 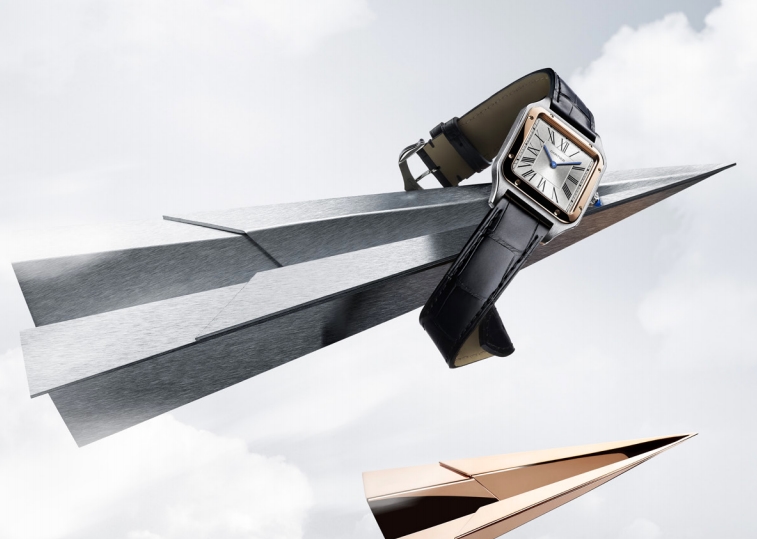 The new Santos de Cartier collections bear the signature of aviator Alberto Santos-Dumont. Faithful to the elegance of the original 1904 model with its case in gold, gold and steel or all steel, Roman numerals, visible screws, a beaded winding crown and blue cabochon, the watch perpetuates the heritage of a major watchmaking classic

“Inventions are first and foremost the result of persistent work in which there should be no room for discouragement.” – Alberto Santos-Dumont.

Simplicity. Practicality. Innovation. These were the three major principles of Alberto Santos-Dumont, the aviation pioneer who ordered the first modern wristwatch from Louis Cartier in 1904. Its wrist-mounted position meant it could be consulted during flight.

It is the watch of a man who set his sights high, designed over 22 flying machines, presented countless patent applications and risked his life during every test flight. A man who donated part of his profits to charity and who invented a practical yet elegant wardrobe. 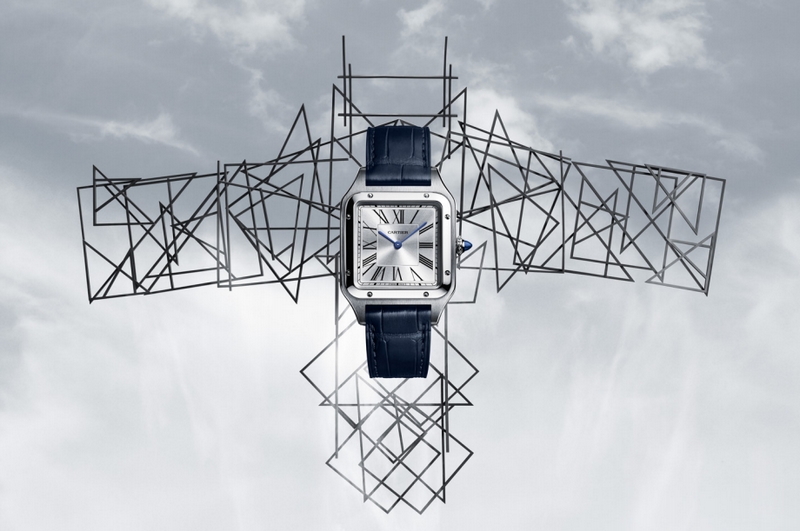 Understated, pared-down and fitted to an alligator leather strap, the new Santos-Dumont watch remains true to the elegance of the original 1904 model. Cased in gold, gold and steel or all steel, it features Roman numerals, visible screws, a beaded winding crown and blue cabochon, all elements which perpetuate the heritage of this major watchmaking classic.

Its unchanged square shape – reminiscent of the geometry popular in Paris at the time – promotes pure and symmetrical design to mirror the four sharp corners of the Eiffel Tower. By symbolising the design revolution the early 1900s, it ran counter- current to contemporary codes, highlighting straight lines and breaking with the round cases of the period’s pocket watches.

Alberto Santos-Dumont wore protective glasses and a bespoke jacket which linked cables connected to the rudder of his plane. Comfort and ease of use dictated his very personal style without detracting from his elegant allure in the slightest.

The notion of practicality was therefore decisive in the history of the Santos-Dumont watch. In 2019, Cartier enhanced its ease of use by introducing a high-efficiency quartz movement with autonomy of approximately six years – twice as long as traditional movements. To achieve this feat, the Cartier Manufacture reworked and resized the movement to reduce its energy consumption combining this with a new high-performance battery. 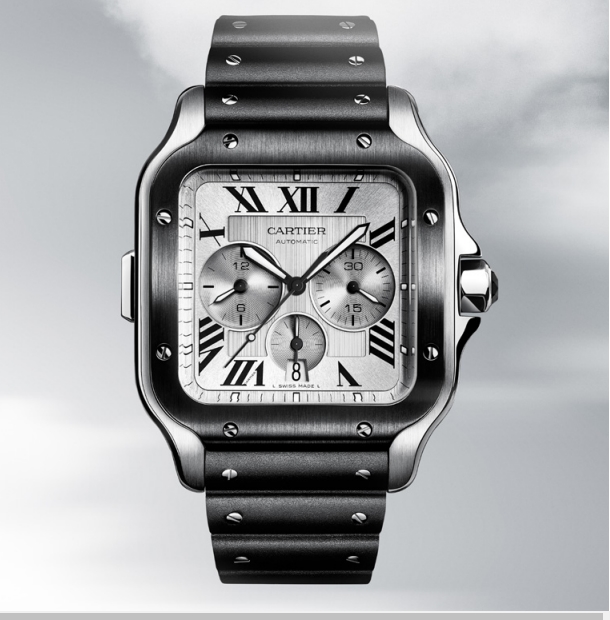 Made to measure records, the new Cartier chronograph takes this heritage into the 21st century. Always attentive to elegance and ergonomics, Cartier gave it a single start/stop push button, visible at9 o’clock, with the reset function being directly integrated into the crown. This lighter design naturally leads to lighter movements.

Cartier filed the patent for the first folding buckle in 1909. This year, Cartier has developed its design further still by enhancing its comfort, ease of use and security. Despite being fitted with push-piece fastening and unfastening, a lighter blade and a simple wristband change system, the clasp keeps all its signature aesthetics.

Like the Santos de Cartier collection as a whole, the bracelets and straps offer ultimate practicality. Available in steel, alligator leather or rubber, all versions can be interchanged thanks to the patented QuickSwitch system, the invisible mechanism which seamlessly blends into the architecture of the case. Meanwhile the metal bracelet can be adjusted to the nearest link thanks to its patented toolfree SmartLink size adjustment system. 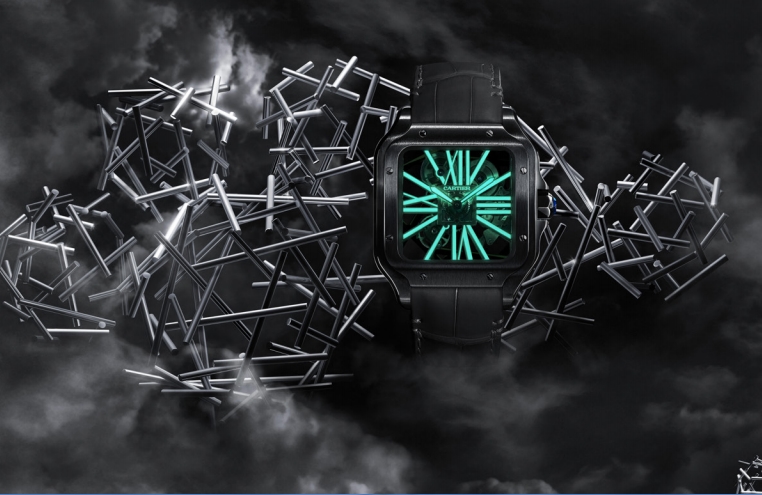 Nighttime created a sky for Alberto Santos-Dumont to conquer. He envisaged using a floodlight to light his way during his test flights. Cartier casts light on the night sky with the new Santos de Cartier Skeleton Noctambule.

The bridges are coated with Super-LumiNova pigments which, while invisible during the daytime, reproduce and radiate the stored light once night falls. 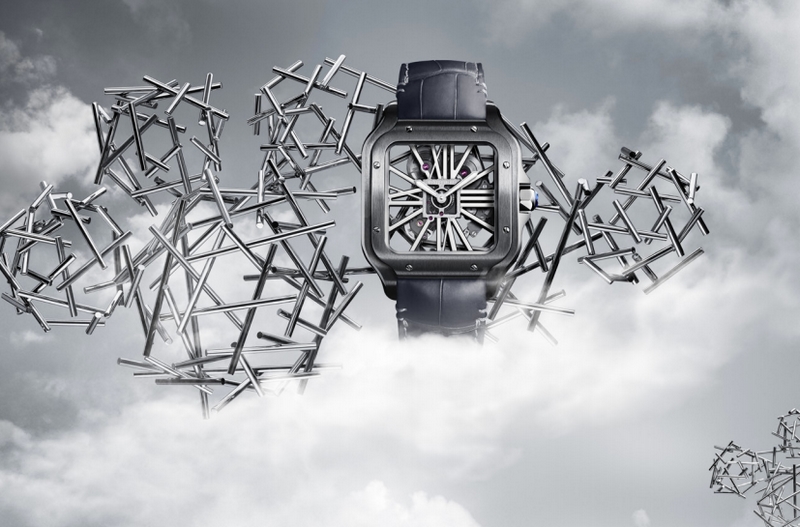 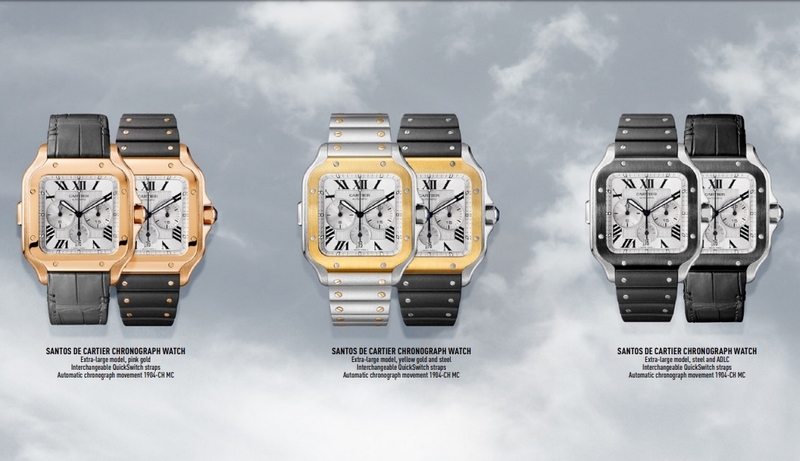 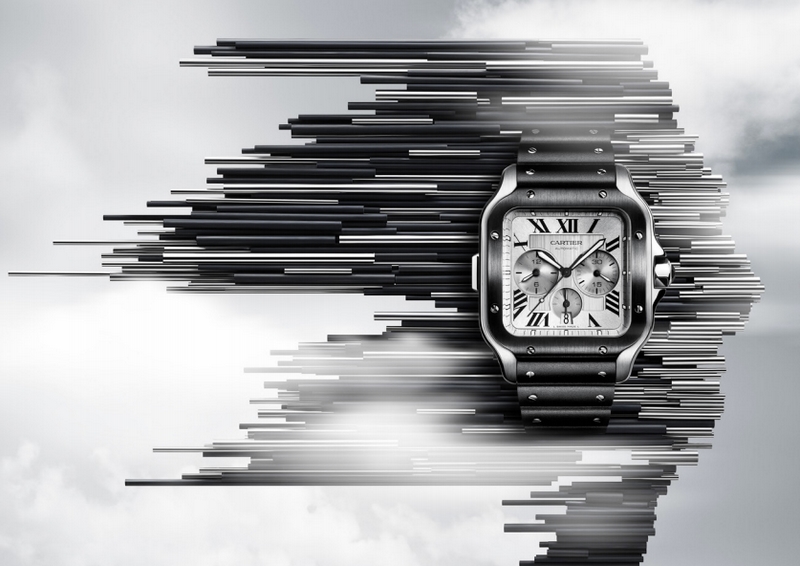 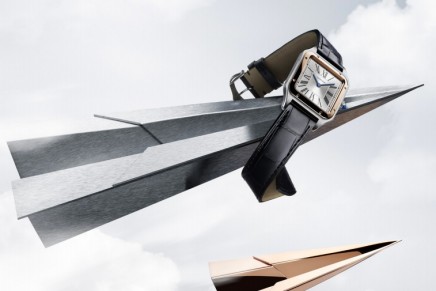 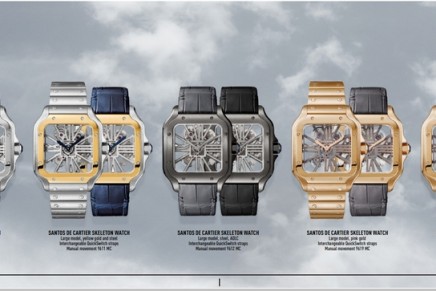 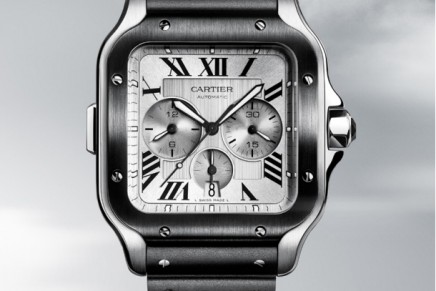 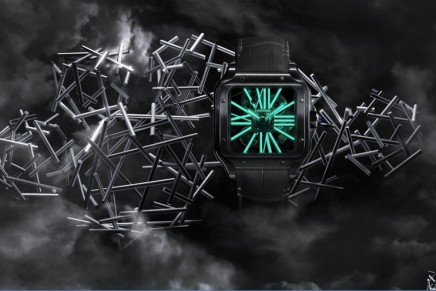 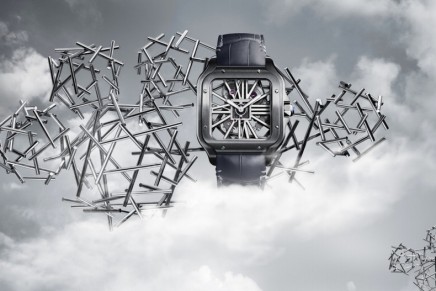 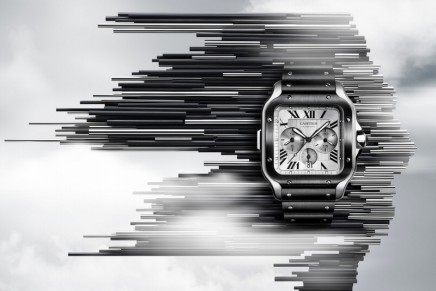 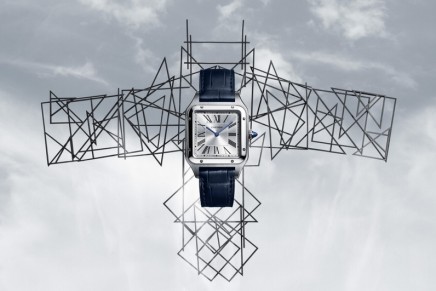