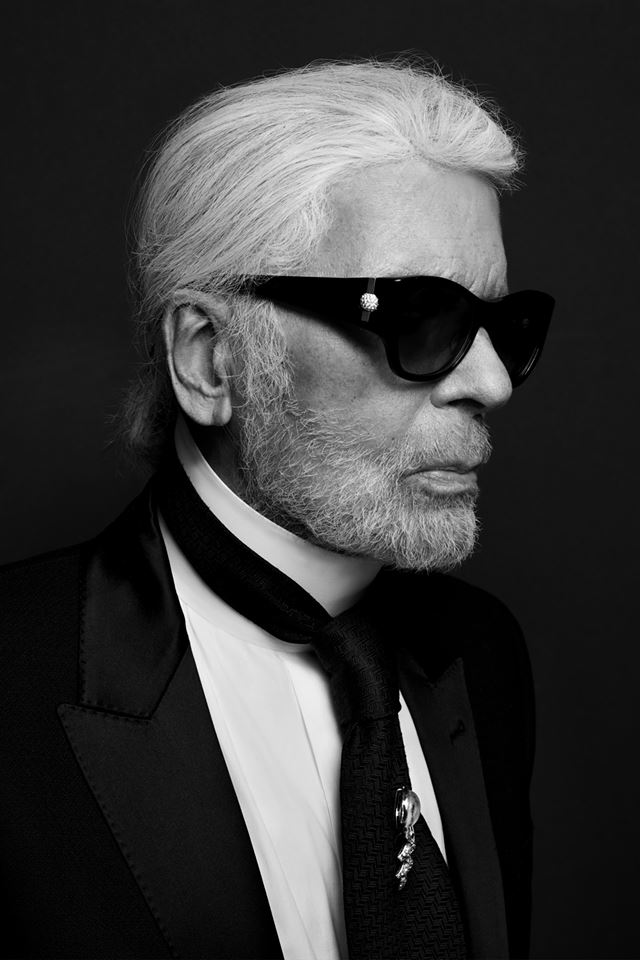 This article titled “Karl Lagerfeld obituary” was written by Veronica Horwell, for The Guardian on Tuesday 19th February 2019 14.40 UTC

The designer Karl Lagerfeld, who has died aged 85, explored and exploited couture, ready-to-wear and even mass-market fashion for more than 60 years. He had a genius for visual quotation and allusion, impersonation and pastiche, especially at Chanel, the fashion house he headed for more than three decades, and it made him the first postmodern fashionmeister.

Nobody else stayed on top of so many labels for so long: besides Chanel, Lagerfeld headed Fendi, and intermittently had his own-name brand. And he evolved into a commentary on the whole business: personally stylised into his own logo (glasses, gloves, the defensive composure for the camera); encyclopedic about the history of design, yet devoid of sentimental nostalgia. Edna E Mode, the opinionated couturier in the Pixar cartoon The Incredibles, says: “I never look back, darling, it distracts from the now.” Totally Lagerfeld.

Lagerfeld’s first imaginative creation had been himself. His version set his birth at variable dates on a country estate in Schleswig-Holstein in Germany, his papa Otto possessed of a fortune from condensed milk, and mama Elisabeth (nee Bahlmann) a woman of culture.

He told of his strict upbringing, governess, and the family’s oil painting of the court of Frederick the Great. However, German records set the date earlier at 1933, downgrade his father to a successful businessman, his mother to a lingerie saleswoman and the schloss to a manse in the leafy suburban Baurs Park district of Hamburg, from which the family was evicted by British occupation forces. He later dropped the final letter of Lagerfeldt to arrive at a more marketable name.

Witnesses remembered a longhaired outsider determined to be far from the hungry postwar countryside or grim Hamburg. In both versions, he was an autodidact who made bold connections between visual aspects of the zeitgeist.

That was his genuine gift: he combined a historian’s knowledge of the past with a diarist’s curiosity about the present, and subjected them to the ruthlessness that ruled his life. Anything and anybody was abandoned as soon as he considered the present should turn to past. He called it “vampirising”.

After private school and a spell, at his request, at the Lycée Montaigne in Paris, Lagerfeld won in the coat category of the 1954 International Wool Secretariat competition, and was invited as apprentice to Pierre Balmain’s couture house. After that he joined Jean Patou, where he designed under the name Roland Karl; there was enough family money to pay for a Mercedes and a social life.

He left in 1962 to work as a designer for upmarket ready-to-wear firms that had begun to serve customers for whom couture was too expensive and dressmakers too dowdy. Lagerfeld collected books, a copy to shelve plus another to gut for images, while observing the current mood on the streets. His designs were commercial, and his workrate exceptional – ideas in, sketches out, all of it thrown away immediately on completion, for Krizia, Ballantyne, Isetan, Charles Jourdan, Tiziani of Rome and many other quality firms.

In 1967 he took over furs for the Italian firm Fendi, and did things with pelts none had dared before. For the dreamy frock company Chloé, which had recruited him in 1963, he used his understanding of old dressmaking details. Flea market vintage, bought decades before retro was chic, and his collector’s familiarity with art deco, set the house style; his 1972 deco ready-to-wear collection attracted more attention than most couture shows, although Lagerfeld’s relationship with Chloé and the other employers remained discreet. He didn’t take bows.

The fees they paid, plus the extra Lagerfeld accumulated through using his antennae to deal in antiques and art, funded his high visibility: attention was paid to his appearance, possessions and the premises he stashed them in. Andy Warhol borrowed a Lagerfeld apartment as the venue for a movie, L’Amour (1973), and Lagerfeld adopted Warhol’s creed of superficiality, although behind that facade lay a wide and deep consumption of art and literature. Lagerfeld and the Cuban fashion illustrator Antonio Lopez had a Parisian salon, in the arts not fashion sense, early in the70s.

Along with Warhol, Lopez introduced Lagerfeld to American pop culture and its idea of fashion based on attitude more than actual garments. Lopez and Lagerfeld drew competitively. They snapped Instamatics. They assembled collages, prototypes of the mood boards that began to dominate collections as fashion expanded its markets in the 1970s.

Lopez and his circle were bankrolled by Lagerfeld, who paid for clothes and presents – Lagerfeld gave, without stint, personally chosen gifts to favourites and as business offerings. A Chloé perfume in 1975 increased his income and his flamboyance flared, but his famous fan, tied-back hair and wild garments never impeded the flow of reliably saleable designs for clients. Lagerfeld was the German industrial miracle.

His longterm bet that ready-to-wear would prevail surprisingly brought him in 1982 to the couture house of Gabrielle “Coco” Chanel, who had died in 1971. The first show, in 1983, was not a critical success, although his pastiches of Coco’s classics were passable and his learning about his predecessor unsurpassed: “I’m like a computer who’s plugged into the Chanel mode,” he said.

By the second collection he had deconstructed her lifework into a mood board – tweeds, braids, quilted bags, costume jewellery and the double C logo – and played outrageous games with them. To those who hated his mockery of Chanel’s practical clothes, he replied the house had been “a sleeping beauty who snored”.

He was even more radical in understanding the globalisation of luxury in the 80s. Others had preceded him in staging shows as rock gigs and recouping the money on perfumes and licensing deals; but Lagerfeld envisaged Chanel as an intercontinental superbrand, big beyond even the perspicacity of its then owner Alain Wertheimer, who paid up when Lagerfeld demanded $1m per collection.

Other houses hired their own necromancers – as the writer and former editor of French Vogue Joan Juliet Buck wrote, Lagerfeld “started the Lazarus movement”. He did it best, and his ideas channelled through Chanel influenced everybody, especially his 90s tweeds simulated in extra-light fabrics, and unravelled seams and hems.

As soon as he was lord of Chanel, Lagerfeld abandoned Chloé (he was enticed to return in the 90s) and was backed by the American Bidermann Industries to produce ready-to-wear under his own name: this line lingered until bankruptcy in 1997. He bought back his name for a franc, relaunched and, in 2004, sold his trademarks to Tommy Hilfiger, hiring himself out to design for them. He used his other talents, as a photographer (for Chanel campaigns, magazines, galleries), and as publisher of the imprint Edition 7L, which brought out books that had caught his attention.

Edition 7L’s bestseller was The Karl Lagerfeld Diet (2002), triggered by his 40kg weight loss: he had denied himself Coca-Cola, cheese and chocolate cake to emerge from the black tent garb of his more corpulent era and wear the slimmest Dior. He dropped the fan, although the dark glasses remained, as did the fingerless gloves to hide the mechanic’s hands of which he was ashamed, because his mother had loathed them.

This changed appearance became his logo: when in 2004 he took the logical step of designing a collection for the high-street chain H&M, billboards of his slender persona sold the goods. He was suddenly a celebrity, and the Brazilian government had to warn him it could not afford to provide security for a visit. That his marionette self (there were Steiff bears in his image, and a toy mouse) now signified more than all the effort of his lifetime invention seems to have been his choice.

There was nowhere to go but back to work in the present, as he had always feared not being part of the moment as a death in itself. So he was soon into social media as each novelty arrived: his Birman cat, Choupette, had her own Twitter and Instagram accounts, professionally updated.

Yet, with Chanel company money, he secured the future of six ancient Parisian craft workshops and designed extra, beautiful, collections to show off their slow handiwork. The newest, global nouveaux riches – “rich as air” he said, not kindly – failed to impress him, even if his couture shows expanded into spectacles more operatic than his 1980 designs for Berlioz’s Les Troyens at La Scala, Milan. Last December the backdrop was an Egyptian temple in the Metropolitan Museum of Art, New York, but he did not appear at the January show in Paris.

Lagerfeld owned a sequence of Parisian apartments, including a large chunk of an 18th-century mansion in Saint-Germain, plus residences in Monte Carlo, Biarritz and Manhattan, not always resided in. He bought and sold the Château de Penhoët in Brittany, and a mansion near his childhood home (also sold, the landscape not being as he imagined it).

Much of his antique collection was auctioned for more room and fewer memories, then he began to acquire again. Among the celebrated collaborators he repudiated were Lopez, his muses Anna Piaggi and Paloma Picasso, Inès de La Fressange (for posing as official model for the French symbol Marianne while under contract to Chanel), and the later house deity Claudia Schiffer. “The curtain falls,” he said of his curtailment of friendships. “An iron curtain.” He could be publicly dismissive of strangers, too, especially the looks and figures of non-ethereal women.

Lagerfeld had adored Jacques de Bascher, a provincial fantasist who projected himself as an elegant aristo, and subsidised De Bascher to do the risky living for him, the drugs and sex Lagerfeld held back from. As Buck said: “He could look at Jacques’ excesses from above, in a princely fashion; he himself was too grand.” After De Bascher’s death from Aids in 1989, Lagerfeld mourned him publicly but decreed the official line should be that he had never fallen in love: “I am just in love with my job.”

A court dismissed Lagerfeld’s suit for invasion of privacy against Alicia Drake, after the most telling chapter of her fashion memoir, The Beautiful Fall (2006), described the suicide near Penhoët of a member of Lagerfeld’s entourage, which barely paused the posing and sketching at the château.

“I’m floating. Nobody can catch me, mmm?” was a Lagerfeld remark. So was, “I don’t know what normal means.”