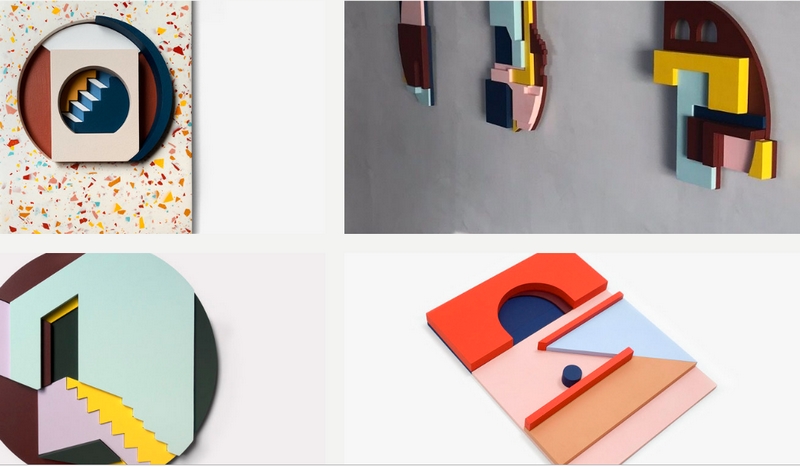 This article titled “Trends for spring: what’s new in the world of design” was written by Observer writers, for The Observer on Monday 8th April 2019 14.00 UTC

Sustainability: Is seaweed the answer to all our problems?

It kills sea turtles, eats through pipes, blights beaches, smells awful and plays havoc with asthma sufferers. It is sargassum, a brown seaweed or algae – brown because it’s likely infected with agricultural fertilisers and wastewater. Would you like a house made from it? Mexican inventor Omar Sánchez Vázquez does. The proud owner of the world’s first home made from sargassum points out the algae is a highly functional, thermal, organic material which absorbs its own weight in carbon dioxide, is half the price of traditional bricks and strong enough to withstand hurricanes. Baking the algae bricks “gets rid of the stink” and if you jazz them up with plants, even the waste colour doesn’t look so bad.

Other applications of algae are in development. Dutch designers Eric Klarenbeek and Maartje Dros have created an algae polymer they say could replace virtually any synthetic plastic made from fossil fuels using 3D printing. “Think how many credit cards there are in the world,” Dros says, “in the most horrible plastic.”

Meanwhile, Charles H Greene, a professor in earth and atmospheric sciences at Cornell University, says, “One big benefit for the climate will come from producing materials and fuel from less land, and algae is up to 100 times more productive than the fastest-growing land product.”

He sees it as an alternative for everything from fuel to food – “By 2050 80% of the world will be happy to eat almost any source of protein” – and says overpopulation needs smart solutions. “With 9.5 billion people, there’s a lot of new built environment coming. If algae could replace steel, that would be amazing.”

“Algae is part of the future,” Dros says. “You have to remember it’s not a problem, it’s a nutrient.” Johnny Davis

An exotic bird toying with diamond rings. A snake wrapped around an eye pencil. A fridge filled with bottles of peach-coloured French parfum. Since meeting at photography school in Milan in the late 80s, London-based duo Fabrizio Coppi and Lucilla Barbieri – now husband and wife – have produced dramatic images for Prada, Gucci and Chanel: abstract, with strong crops, but radiating colour, intensity and luxury. Before these Bond Street commissions, however, Coppi Barbieri applied equal love to photographing everyday objects. Jugs, pudding moulds and detergent bottles were followed by geometric metal objects: a cheese grater, a Moka pot. These pictures became the menu covers at London’s Oxo Tower restaurant.

Now this early experimental work is collected in a handsome hardback book: inspired by portrait artists such as Giorgio Morandi and historical photographers including Adolph de Meyer, Coppi Barbieri’s images are classical, out of time and paved the way for their later advertising work. “We became very interested in ‘common objects’; we were aware most people wouldn’t pay attention to them. But a lot of research had gone into their design. So the challenge was to create images that would capture people’s attention. They became like holy totems.” JD
Coppi Barbieri Early Works 1992-1997 (Damiani, €59).

Toast has become synonymous with vivid traditional materials, skilled craftsmanship and beautiful but functional design. Behind the scenes the brand forges strong relationships with a global network of knitters, ceramicists and mills. Now, with its New Makers programme, it has invited five more designers to join the family, receiving business and marketing advice, and selling their wares online and in store. “It is a privilege to be able to support and reward these emerging talents,” says Toast CEO Suzie de Rohan Willner. Alice Fisher

You love its translucent pens, no-scratch turtlenecks and scent diffusers. Will you love its public transport? That’s the ambitious leap minimalist Muji is making with its latest product: a self-driving bus.

Named Gacha, after the vending machine toys sold across Japan, the bus is an autonomous vehicle, launched in Helsinki last month as part of Finland’s effort to encourage “smart city” experiments.

The prototype was hammered together by the employees of the Finnish autonomous driving software firm Sensible 4. Muji sees the bus as part of its “community” strategy, which now includes a Muji house, hotel and several markets in rural Japan. Chris Michael

Is it art or is it furniture? New Yorkers Aaron Aujla and Benjamin Bloomstein have been beautifully blurring the lines around this question since 2017, when they quit their day jobs as assistants to famous artists and set up furniture design studio Green River Project to make work that looks part Donald Judd’s Marfa, part high-end upcycling.

Aujla and Bloomstein met in New York’s art world and started sharing a Brooklyn studio. It was there that conversations about “use” turned into the first GRP pieces, created in 2017. “The art world was no longer the most suitable route for us,” Aujla says. “Ben made sculptures that looked like furniture; I was doing installations that dealt with the way we decorate interior space. But we run GRP like an art studio, we only employ friends and artists.”

With simple materials and a lot of skill, they produce chairs, lounge seating and now clothing, in association with menswear designer Emily Bode. What works is the sense that this is furniture made for people who have the minimalist urge but real-world lives. There is also a sense of humour – bamboo chairs evoke 70s TV show M*A*S*H, the cowhide welding jacket is clearly never going to see a welding torch. So, is it art? Let’s sit down on a Green River Project chair and think about that. Darren Flook

Exhibition: A meeting of form and function

What motivates creators of ceramics, fashion, graphics and metalwork to dedicate their lives to their craft? Why does the word make some people roll their eyes and others pontificate about creativity? Head to a new exhibition in Yorkshire showcasing the work of 26 designers (including Superfolk, left) to find out. Becky Sunshine
• Useful/Beautiful: Why Craft Matters is at Harewood House, near Leeds, until 1 September

Gaze too long at Emily Forgot’s work and there’s a feeling that you might tumble into it, Alice in Wonderland-style, and discover what’s through that archway or up those stairs. Her pieces combine a modernist rigour with a sense of the surreal. Forgot – born Emily Alston in Sheffield – has always had a thing for architecture and interiors: “I think we all make our own little worlds, to give us a sense of belonging.”

As a freelance graphic designer and illustrator, Forgot works to client briefs, but in 2016 she produced a personal collection, Neverland. “I start the way a child does, drawing what comes to mind, which in my case is generally buildings.” She then translates these into prints and wooden blocks “which come from a desire to create something between illustrations and 3D installations”.

Plans for the coming year include a Bauhaus-inspired residency in Amsterdam and a rug project with FloorStory for a Brussels design show. Forgot is inspired by the buildings she encounters on her travels – in particular the unique Mayan-meets-modern style of French resort La Grand-Motte. “I’m a natural collector of souvenirs,” she says. “These pieces are about giving form to memories.” Kate Jacobs

Cookery: A feast for bellies and eyes

“Food is love,” says designer Phillip Lim. “Cooking for friends and family, using your hands, it is one of the most personal things you can do.” Lim explores the intimacy of cooking in a new book that features favourite dishes from his childhood in Thailand. There are stuffed chicken wings, kow mon gai – his comfort-food chicken and rice – and a mean omelette recipe. This doubles as an art book – it’s illustrated by Lim’s close friend Viviane Sassen. The images, taken throughout Africa and Asia, represent a new direction for the award-winning Dutch artist. Sassen has painted over her photographs of street-food vendors and roadside fruit stalls to create a new mixed-media approach.

“Viviane and I value creative freedom so highly and this was a chance to do something brand new to us both and just go for it, like two kids,” Lim says. The pair first met a few years ago when they worked on ad campaigns for Lim’s fashion label, Phillip Lim 3.1. “We have made incredible journeys together,” Sassen says, “and our friendship is special because of all these shared experiences.”

It’s impossible to get through the pages of simple but mouthwatering dishes, paired with vivid imagery of fruit, vegetables and cooks at work, without hearing your stomach rumble at least once.

“Food can connect us in so many ways,” Sassen says, “and this book is about exactly that.” Lim agrees. “It is a personal exploration of memory, nostalgia and homecoming,” he says. That – and really delicious rice. AF
• More Than Our Bellies, by Phillip Lim and Viviane Sassen (Wilco Art Books, £65)

Baking: Not just a pretty cake

The creator of these eye-popping, jaw-dropping cakes is Alison Dunlop of ARD Bakery. Following a childhood spent baking with her mum and granny (she still uses their unbeatable chocolate cake recipe), she studied sculpture at Glasgow School of Art before moving to London to design fashion accessories for Mary Katrantzou – known for her colourful aesthetic. “Everything I do seems to be unified by precision, playfulness and colour,” Dunlop admits.

While on maternity leave, she started pushing her cake ideas to the limit, using computer design and edible digital printing. Dunlop taught herself to work in chocolate, to create the shards, slices and spheres that top her masterpieces. The awed reactions of customers encouraged her to switch careers.

Each cake takes from one to four days to complete. She draws inspiration from postmodern design, especially the Memphis Group, and uses premium organic ingredients and flavours: it’s essential to Dunlop that her cakes taste as good as they look.

That’s assuming her customers can bring themselves to have their cake and eat it. KJ

Rattan: Ikea’s caning it with its new range

Rattan is a strong, wooden cane plant that’s both sustainable and an important source of income for many Indonesian communities. It’s also being used for tons of cool furniture right now. Ikea’s new Tänkvärd range includes rattan pieces that start from just £5 and go up to £130 for an excellent bench. Available this month. AF

Craft: The art of Japanese design