Many historic hotels have signature dishes and culinary traditions that have been a part of their hotel’s history for more than a century and some for as long as the hotel has been open. 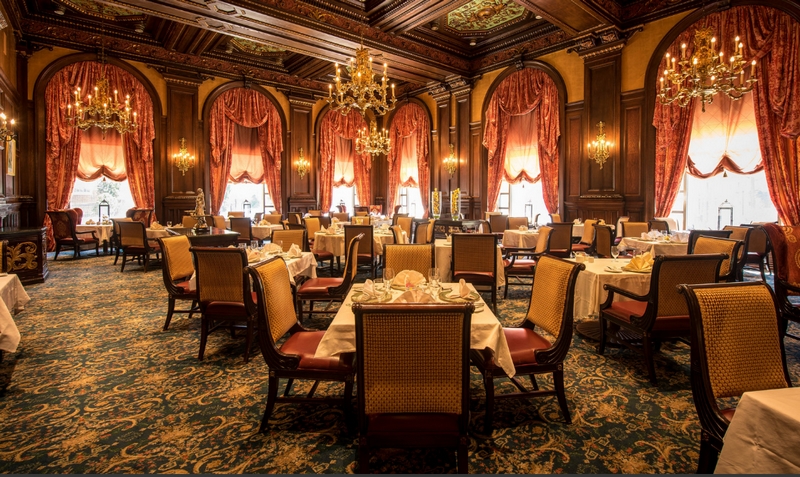 Did you ever wonder where the brownie came from? Or how tomato juice came to be?

Historic Hotels of America has many iconic and legendary hotels that have made important contributions to the culinary heritage and traditions of the United States.
From original recipes created at a hotel that have now become widely loved and enjoyed everywhere, to specialty drinks and cocktails that are deeply a part of the hotel’s history, there are many notable dishes that have origins at a historic hotel.

For example, the famous Boston Cream pie, originally known as “Parker House Chocolate Cream Pie” was invented more than 130 years ago at The Omni Parker House. In 1996, Boston Cream Pie was named the official state dessert of Massachusetts. The chefs at Grand Hotel on Mackinac Island, Michigan created a pecan coated ice cream ball in 1947
and now serve more than 60,000 pecan balls each year. The “Shirley Temple” was first served at the Mai Tai bar of the Royal Hawaiian Hotel on Waikiki Beach. The famed drink the Blue Hawaii was created four years before the release of the Elvis Presley movie, Blue Hawaii, and was first served at the Hilton Hawaiian Village in 1957.

How does a historic hotel recipe, menu item, or handcrafted cocktail become designated as part of the hotel’s official culinary heritage or culinary traditions?

Culinary tradition is defined as a food or beverage that was perfected by the hotel’s chefs or has been served to guests for at least 25 years regardless of its original invention or creation location. A culinary tradition might include a favorite item of a former famous guest (author, composer, celebrity, sports figure, or world leader) that is still being served and is associated with or named for the former famous guest. Culinary traditions can also be a recipe or beverage adapted from elsewhere and named for a major significant historic event or milestone that occurred at the historic hotel. 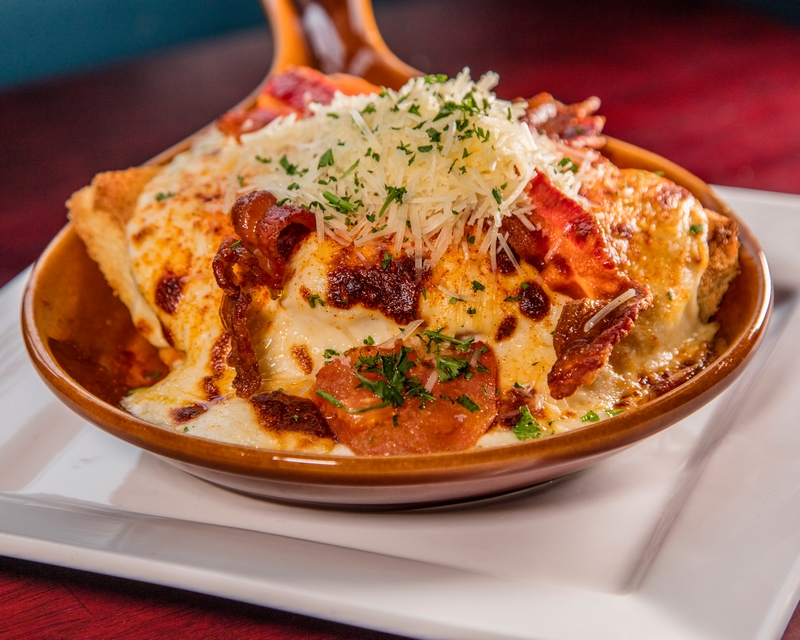 One evening in 1926, the Brown Hotel’s chef Fred Schmidt grew weary of serving traditional ham and eggs and from that he was inspired to created the decadent Hot Brown open faced sandwich. The delicious open-faced turkey sandwich is made with bacon, tomatoes and a delicate Mornay sauce and is a must-try when visiting Louisville.

In the 1920s, the She Crab Soup was born and began a legacy and practical rite of passage for all Charleston foodies.

Fresh, local trout has been a popular menu item at The Omni Homestead for more than a century. The partnership between The Homestead and the Virginia Trout Company is one of the longest-running between the resort and local food purveyors. The recipe was featured in Former Executive Chef Albert Schnarwyler’s 1989 book, Dining at The Homestead.

Tomato juice – a new breakfast drink that was a huge success.

Generations of hotel guests have enjoyed “Uncle Bud’s” delicious gumbo for many years.

The Mayflower Hotel has been making banana bread since the 1963 and it has become one of the hotel’s signature items, used as a turndown amenity, served in the hotel’s restaurant Edgar, and even as a dessert at many weddings held in the hotel. Both the Boston Cream Pie and delectable Parker House rolls were created at the Omni Parker House in the 19thcentury, much to the delight of guests.

The hotel carries on the tradition of honoring the Academy Awards to this day, serving a modern day Oscars menu. Inaddition to the Oscar viewing menu, there are cocktails created with an homage to the leading ladies of the silver screen.

The recipe for Vanilla Muffins at The Peabody dates back decades. While no one knows exactly when they first appeared, the muffins were already a perennial favorite in the 1940s. 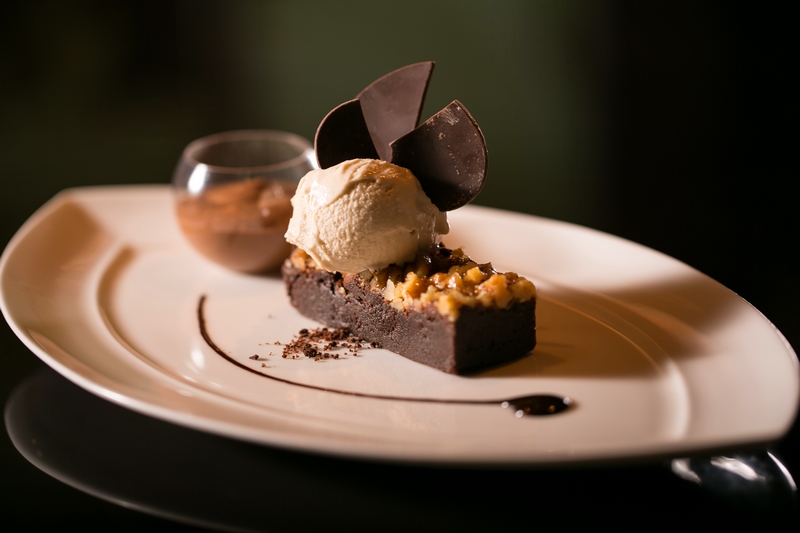 The brownie recipe is well over a century old, and is the same one used for the brownie served in the Palmer House Hilton today. It remains one of the hotel’s most popular desserts. The first reference to the “brownie” in America appeared in the Sears Roebuck Catalog published in Chicago in 1898.

Keen to please their popular young guest, bartenders served a new drink (ginger ale and a dash of vibrant pink grenadine, garnished with a maraschino cherry) to Shirley Temple while she dined in the hotel’s opulent Persian Room. And thus the delicious drink we know as the Shirley Temple was born.

Shrimp and grits are a southern staple and a tradition in the Lowcountry. This dish has been on the menu at the FrancisMarion for over 20 years.

The house smoked Blooming Grove Brook Trout has been a favorite at the hotel for almost 40 years. The trout has been sourced directly from one of the oldest mountain river hatcheries in the United States dating back to the 1880s.

Grandma Beach’s Apple Crisp, “A Basin Harbor Tradition A La Mode” has been part of Basin Harbor’s history since theyopened in 1886.

Among treasured favorites on the menu are three standouts; Mauna Kea Banana Bread, the Ovaltine Froth, and the Fredrico cocktail. Guests are greeted each morning at Manta Restaurant with a slice of Mauna Kea’s flavorful banana bread. Home cooks have often tried to replicate the recipe but the secret to its success is tightly guarded in the hotel’s pastry kitchen where it is fresh-baked daily.

Chile Rellenos have been served at this hotel since 1926 when it was a Fred Harvey House. Today the tradition continues at La Fonda with a dish is known and loved, “Fred Harvey’s Chile Rellenos,” a recipe originally called Chilies Rellenos à la Konrad that dates to 1929. 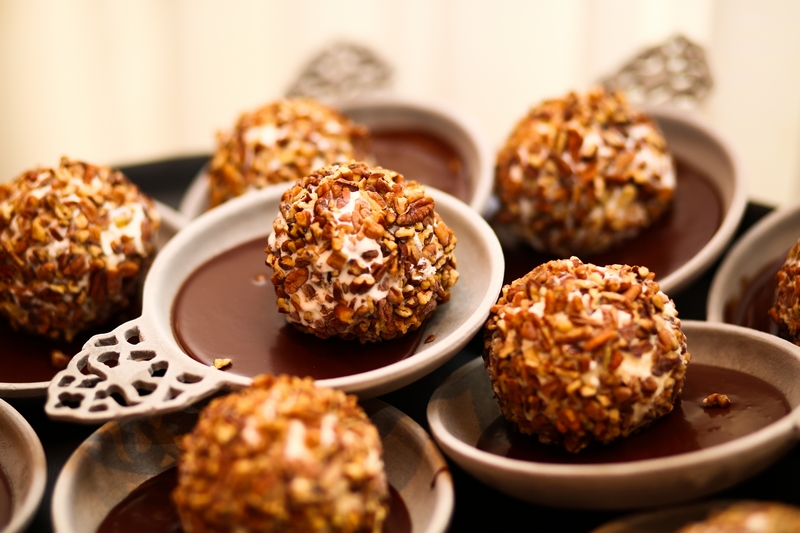 The Grand Pecan Ball is Grand Hotel’s signature dessert and has been served since 1947.

The Morris Inn has a signature cocktail, The Dexter that harkens back to the early 1900s. It features Blanton’s Bourbon, Cointreau, Sweet Vermouth and fresh lemon juice. Blanton’s Bourbon is used in this particular drinks because its stopper features a horse.

Gluten-free and containing only four ingredients, the macaroon recipe is simple yet truly unique to HOTEL DU PONT.Served with all lunches, dinners, and banquet events in this historic hotel are the signature almond macaroons. Sopopular are these delicious cookies, that the bake shop makes more than 40,000 per month, in batches of 3,3000.

The Roosevelt’s Revenge cocktail is the Westin Portland Harborview’s take on a Harvey Wallbanger and dates back to1946. This specialty cocktail features local Ice Pik vodka, Galliano and orange. Chicken a la king at The Bellevue Hotel (1904); @historichotels.org

The Green Circle Chicken “à la king” is a modern version of the dish William “Bill” King, a chef at The Bellevue created years ago. He was inspired to combine bits of chicken, mushrooms, truffles, sweet peppers, and cream in a mixture which is known to most as “Chicken à la king.” The Clover Club cocktail was created and named at the hotel when it was known as The Bellevue-Stratford and an homage to Mark Twain during one of his visits to the city of Philadelphia and the Clover Club, which was founded in 1882.

The Caribe Hilton is the birthplace of the Piña Colada. In 1954, the Caribe Hilton’s bartender Ramón “Monchito” Marrero created a special cocktail with mixed rum, coconut cream and pineapple juice – and the delicious Piña Colada was born.

Jack Daniels has been a longtime partner with the hotel and has even created a special barrel blends made just for The Hermitage that are used in several drinks including the “Jack’s Mule.” This drink features Jack Daniels’ single-barrel whiskey, mixed with fresh ginger puree, lime juice and served over ice in a copper mug. Today, The Hermitage orders
Jack Daniels by the barrel.

The Inn has been serving Shenandoah Apple Pie since they opened in 1931. Apple pie has been a signature dish at thishotel because a key ingredient of the recipe is grown on the property of the hotel: apples. 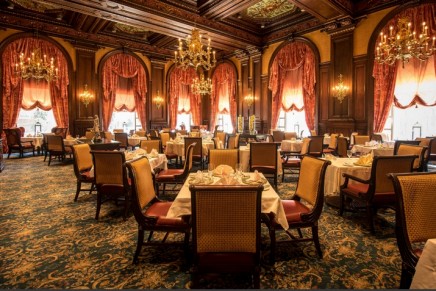 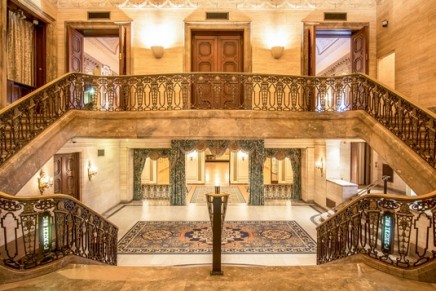 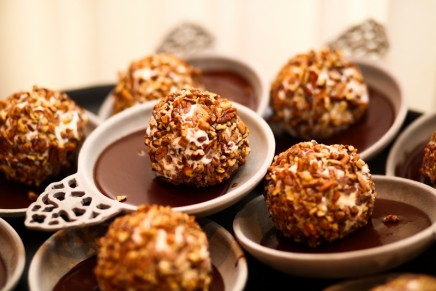 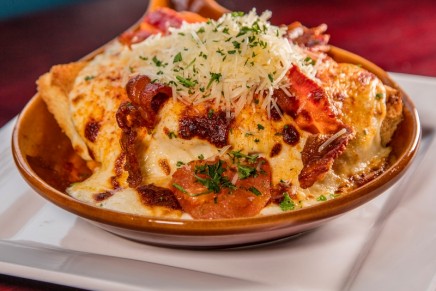 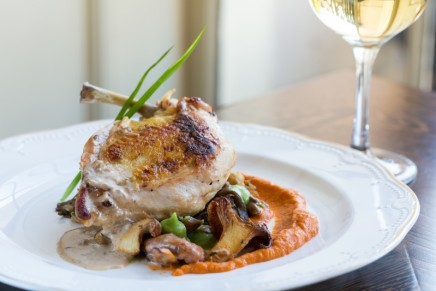 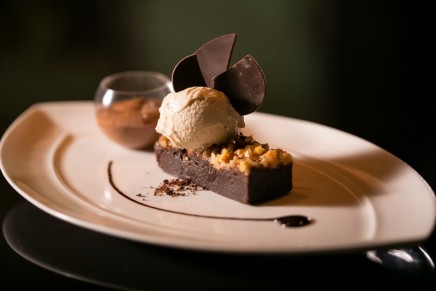 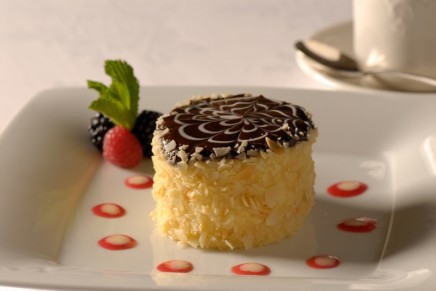