Immerse yourself in a blaze of flowers and plants that give a sensation of harmony and tranquility in all seasons and a spectacle that changes hour by hour through the day.

Discovering, exploring, and experiencing the Top Historic Hotels Worldwide most magnificent gardens should be on everyone’s bucket list. Let’s take a walk around the most beautiful historic gardens in Mexico, Canada, Italy, Ireland, Netherlands, and more. 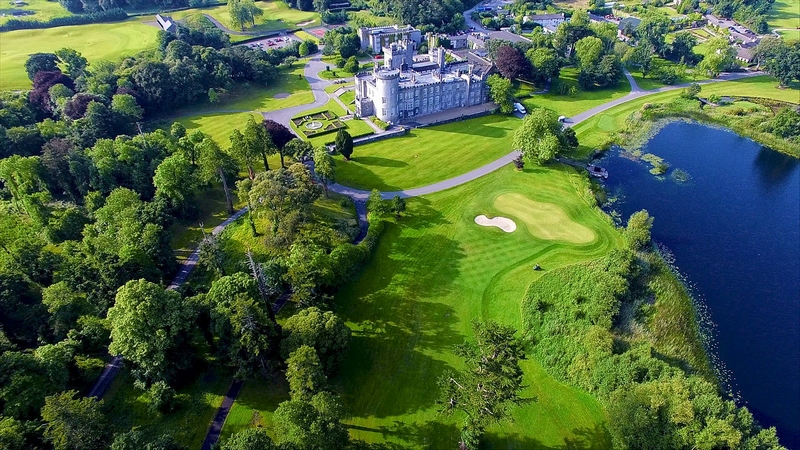 Part of Dromoland Castle’s magic is its magnificent estate. With over 450-acres, there are grand gardens to behold. The garden is based on a design by Andre Le Notre, who planned the Gardens at Versailles. In this garden, guests will find unexpected features at every turn, from the picture-perfect lily pond and sundial, to the beautiful walled garden and dramatic yew tree gallery that dates back to 1740.

Spring and summer are the best seasons to enjoy a fantastic natural spectacle at the hotel. The most memorable and tranquil part of its garden is the Relaxation Terrace: overlooking the Amalfi Gulf, this terrace is located just above the Monk’s Walk. Here, guests can enjoy an amazing view on Amalfi and the blue sea, read a book in complete relaxation and sleep on the white hammocks placed under the lemon trees. The ancient vegetable garden of the Convent has been restored to provide the “Dei Cappuccini” Restaurant with natural fresh products. Guests can have a unique food
experience in the hotel, created by the famous chef Natale Giunta, based on the exaltation of Mediterranean flavors with real gourmet creations that reinterpret the classics of Italian cuisine with the use of fresh ingredients, taken directly from the vegetable garden of the Convent. It is almost impossible to list all the varieties of flowers and plants present at the hotel: the hotel is completely immersed in terraces and gardens typical of the Amalfi Coast, rich in lush vegetation and varied species of beautiful flowers. 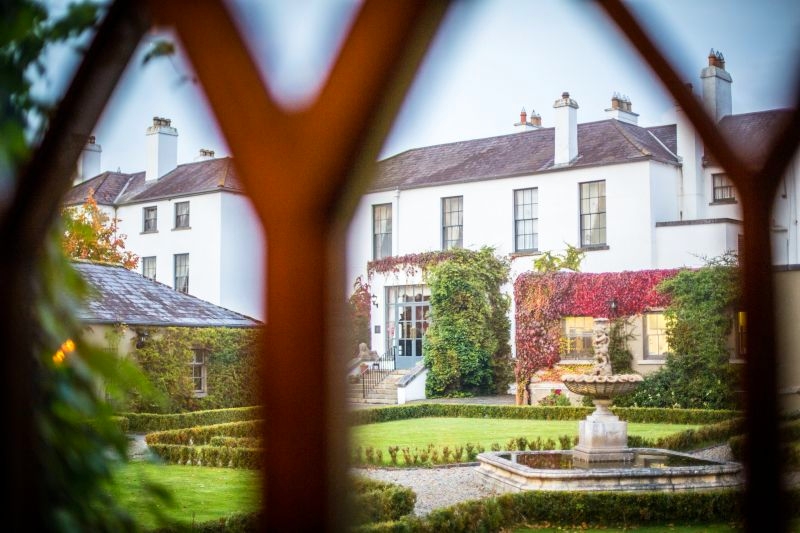 This 13th century castle has beautiful landscaped gardens surrounding it. With over 20 acres of gardens located on the castle grounds, there is no shortage of landscape to view. Guests taking respite in the Castle’s Elizabethan Conservatory have the perfect view overlooking the manicured gardens. 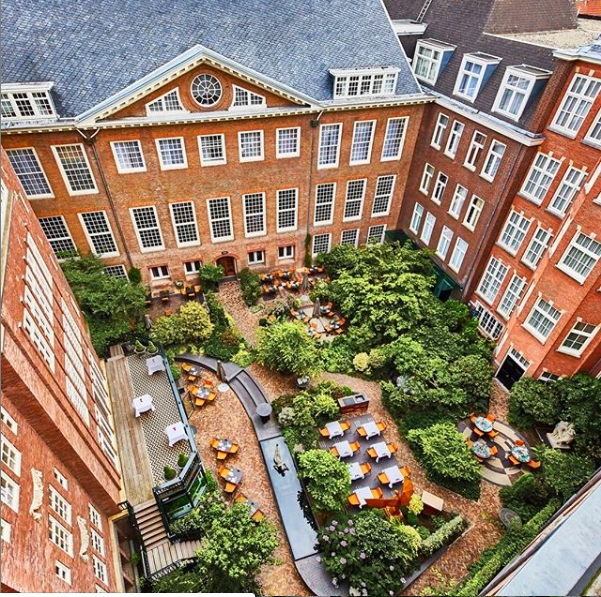 The Garden Terrace is found in the beautiful courtyard garden of Sofitel Legend The Grand Amsterdam, dating back to the 15th century. One of Amsterdam’s best kept secrets is surrounded by historical walls and has a view on the balcony of the Marriage Chamber. The courtyard garden has retained many of its authentic Amsterdam School style features, from the time that The Grand served as the City Hall of Amsterdam. A good example is the sculpture created by Amsterdam-based artist Jacob Kaas, dating from 1931. 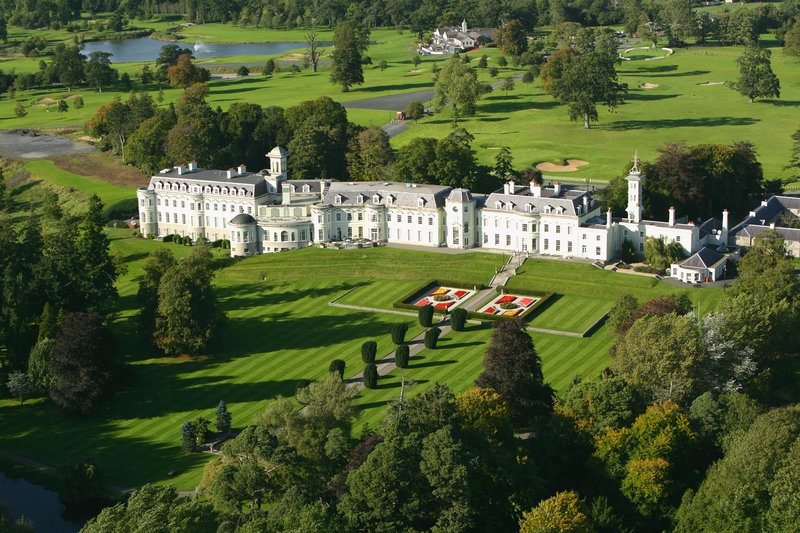 The formal gardens at The K Club were created by the Barton’s in the 19th Century. The historic gardens have many unusual species of trees, including Lawson Cypress and a Tulip tree, as well as Elm, Pedunculate Oak (also known as The English Oak or Common Oak) and White Willow. Several of the specimen trees on the resort are either county or Irish champions for either their height or girth. Shrubs and flowers grow in abundance along the walkway, including the Straffan Snowdrop, a white spring flowering bulb unique to the estate and discovered in the 1880s by the then head gardener, Frederick Burford. A new breed of narcissus, Cill Dara, was also introduced in November, 1992. The Garden Walks continue across Inis Mór Island, on to the arboretum and the hidden pond. Among the arboreal pleasures is a Weeping Beech tree, planted along the 16th green of the Ryder Cup Course to mark the accession to the throne in 1901 of King Edward VII of England. 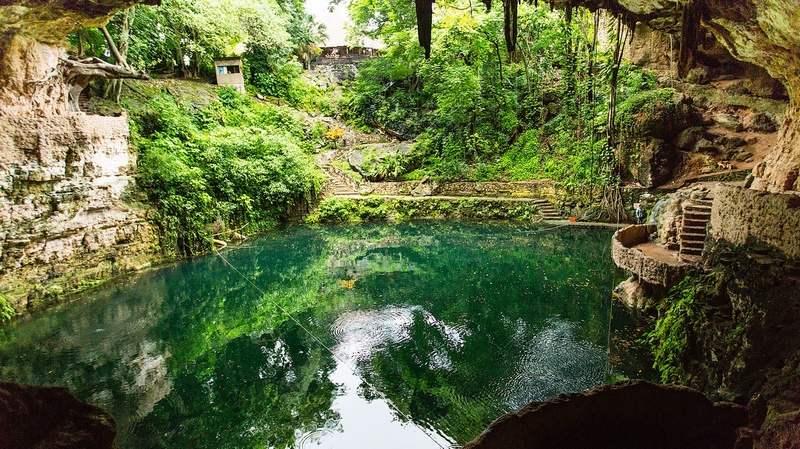 Originally, this Hacienda was located on one of the best fruit plantations in the region. Today, there is a botanical garden located in the old fruit plantation grounds with over 200 species of plants, several of which are native to the Yucatán Peninsula. These ornately furnished gardens are beloved by all guests and the onsite vegetable garden includes ingredients used in the hotel’s restaurant. 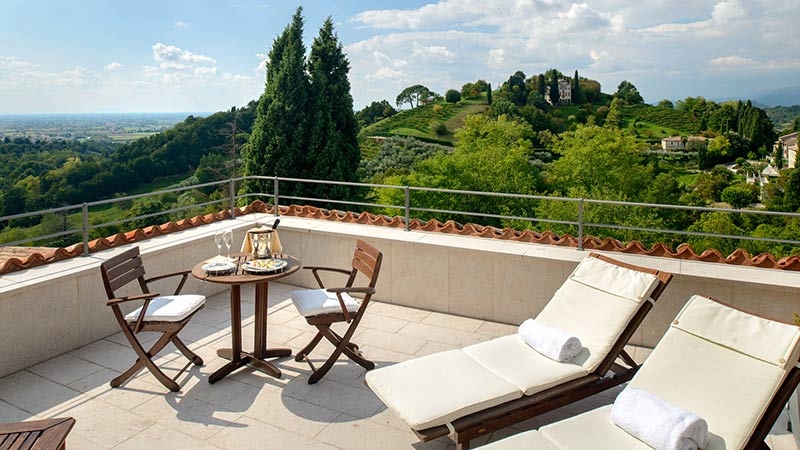 Villa Cipriani was designed by architects of Andrea Palladio’s school, back in 1500 as were the gardens. Palladian villas were originally built as leisure second homes where wealthy Venetians would spend summers away from the heat of the lagoon. The gardens were places where social life was conducted, conspiracies were plotted and romances bloomed. Villa Cipriani’s garden through centuries has maintained the original landscaping, as a terraced garden overlooking the surrounding woods and the mountains, the “thousand horizons” that gave the town of Asolo its nickname. The garden changes color and scent with every season and its unique charm endures through centuries.

The Mayaland Gardens are located in the heart of the archeological park in Chichén Itzá, Yucatán, Mexico. They have been nurtured by six generations of Barbachano Family members since 1923, occupying an area of over 10 acres, of the 550 acres of tropical forest the hotel possesses. The original plantings came from Hacienda Uxmal in the 1920’s, consisting of native palm trees and flowering trees of the region. Most predominantly were the plantings of Royal Poinciana trees, known in Yucatán as the “Flamboyan,” although of African origin, since the XVIII century have been the flowering trees most associated to local landscapes depicting Mayan and colonial villages of Yucatán. There are over 100 varieties of flowering trees, flowers and ornamental plants found in these gardens. The southeastern area of the tropical forest is the most tranquil. 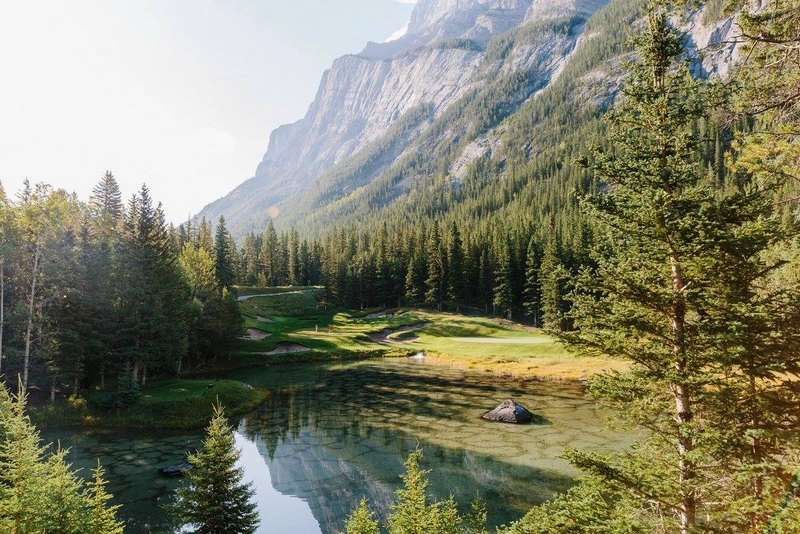 One of Canada’s most prestigious holiday destinations, the Fairmont Banff Springs possesses an incredibly gorgeous terrace garden. The verdant flora of this magnificent space radiates through the majesty of the surrounding Banff National Park. Guests will adore the fresh mountain air that wafts throughout the terrace grounds, as they stroll among its wealth of colorful flowers. Countless weddings are frequently held within the gardens, for its picturesque setting is nothing short of spectacular. Its inherent natural beauty has even inspired the Canadian Directory of Federal Heritage Designations to recognize it as a “character-defining element” of the Fairmont Banff Springs. 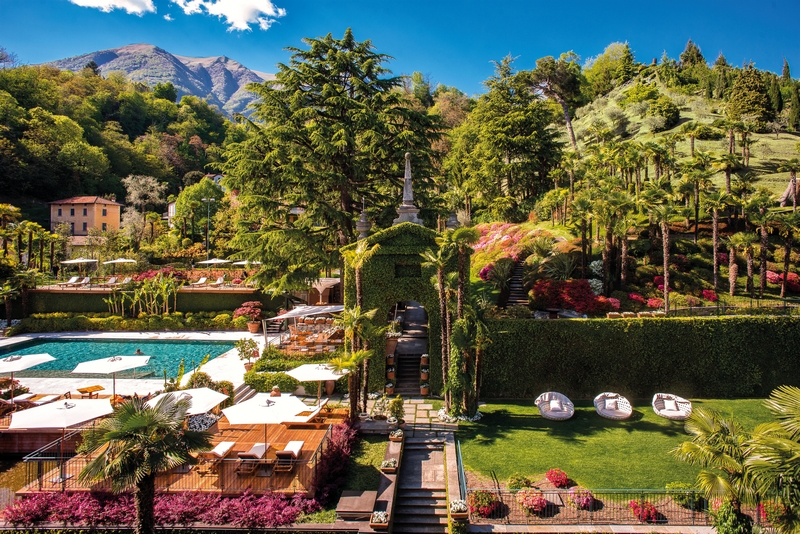 The over 20,000 square foot park features many footpaths and steps that wind gently up the hill to the Belvedere, where it adjoins the neighboring gardens of Villa Carlotta. In the past, part of the garden belonged to Villa Carlotta botanic garden. Rare ancient magnolias stand among a profusion of palms in this wondrously Riviera-like climate. Clouds of azaleas, tulips, and geraniums, hedges of rhododendron and beds of hydrangea provide an alternating palette with expanses of pinks and reds, purples and blues that leave breathtaking glimpses of the lake beneath. 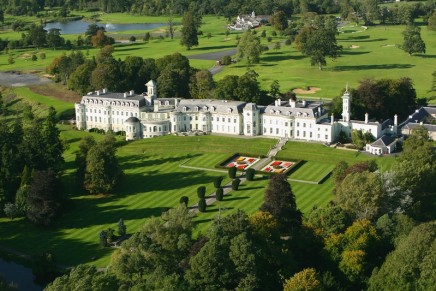 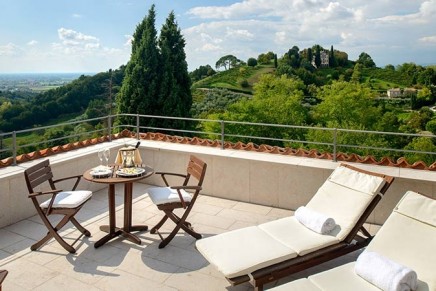 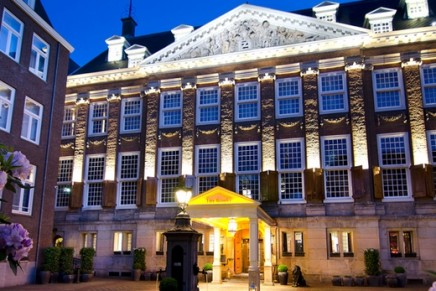 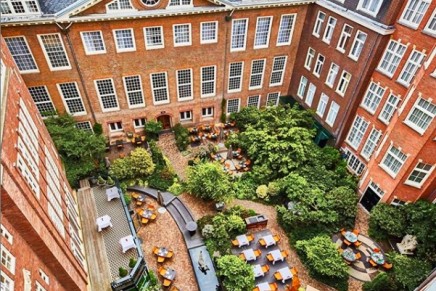 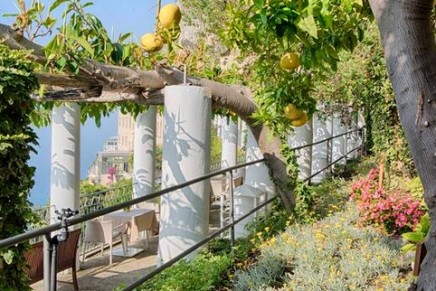 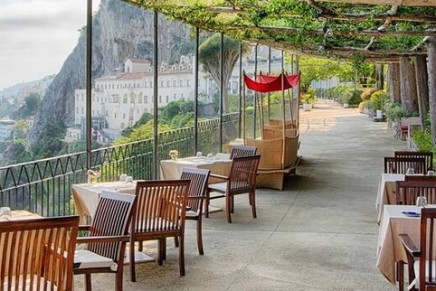 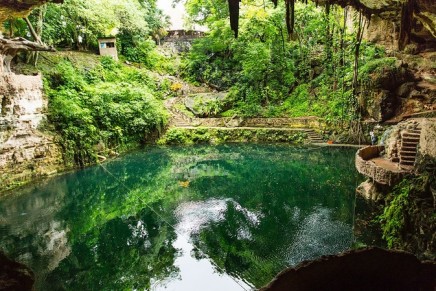 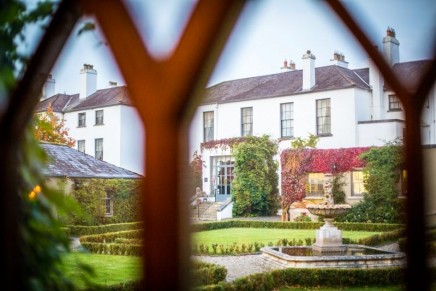 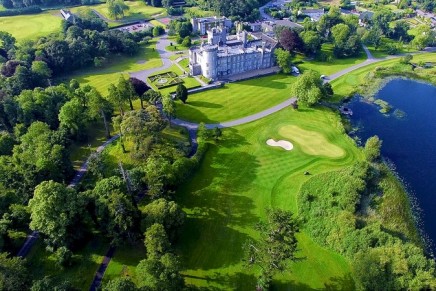 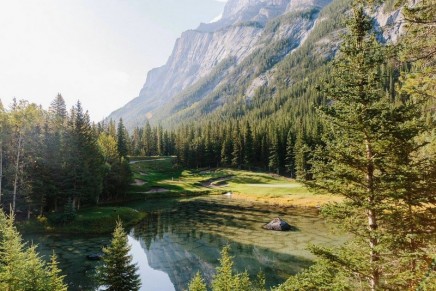 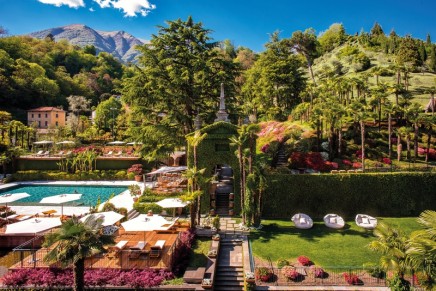