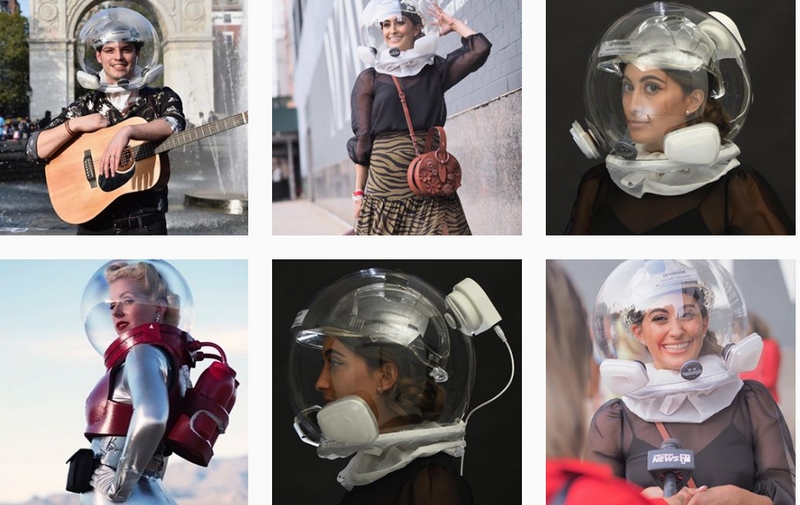 This article titled “Time to try out some luxury PPE, now that Covid face masks are so last spring” was written by Priya Elan, for The Observer on Sunday 20th September 2020 05.50 UTC

Just as we’ve mastered the art of wearing a mask – cloth or disposable, patterned or plain – the fashion world is experimenting with another iteration of PPE: the luxury face shield.

Earlier in the week, Louis Vuitton unveiled its Shield Visor featuring a monogrammed LV trim and strap, embossed gold studs and a photochromatic shield that changes from clear to dark when it’s sunny. Out next month, it’s rumoured to cost hundreds of pounds, but could it signal the next wave of protective wear?

“When a brand like Louis Vuitton unveils an item like its new face shield, the rest of the industry pays attention,” says Elizabeth Paton, a reporter for the New York Times style section.

Companies are already producing their own take on the face shield. US startup Covidisor has produced a bubble-like head-covering that resembles a clear astronaut’s helmet and was worn by style blogger Michelle Madonna Charles at New York Fashion Week last week.

It’s a powered air-purifying respirator that streams air to the wearer and is, according to the company at least, very comfy and easy to take on and off. At a pricey £190 ($245), its one advantage is that it allows a wearer to show their whole face, avoiding the communication issues those wearing face masks may encounter.

“Unlike some south-east Asian regions and several Arab ones, people from western countries have problems covering their faces,” says Marco Canevacci from Plastique Fantastique, a Berlin-based art group that creates mobile installations. Its latest creation is the iSphere, a fish-bowl-shaped face shield, developed for a performance-art installation. Canevacci says that the intention behind it “is to question the importance of a transparent identity”. He says the design is inspired by “the science fiction comics of the 50s and the creations of the utopian movements of the 60s”.

The Vue Shield was created by London-based architect Joe Doucet, with the idea that people would “want to wear, rather than simply put up with” a piece of PPE. It is built around a pair of sunglasses so that the wearer feels a level of familiarity while wearing it. It’s also a more affordable – £30 ($39). For Doucet, a benefit of the shield is complete facial protection. “A mask protects our nose and mouth but not our eyes,” he says. The jury is still out on how effective they are, but the latest research suggests that they are effective in protecting the user against large droplets, say from a sneeze or cough

Protective aspects aside, the peacocking potential of the face shield is huge. “It is easy to see why a sleek, design-led face shield is likely to be embraced by high-fashion brands,” says Paton. “It is more dramatic in structure and statement than a mask – which will appeal to creative directors who can sense an opportunity.”

She believes that luxury brands will soon start producing shields, but adds: “Luxury PPE is still thorny ground. Some designers will be wary of antagonising consumers with eye-watering price tags on accessories like this when the pandemic remains far from over.”