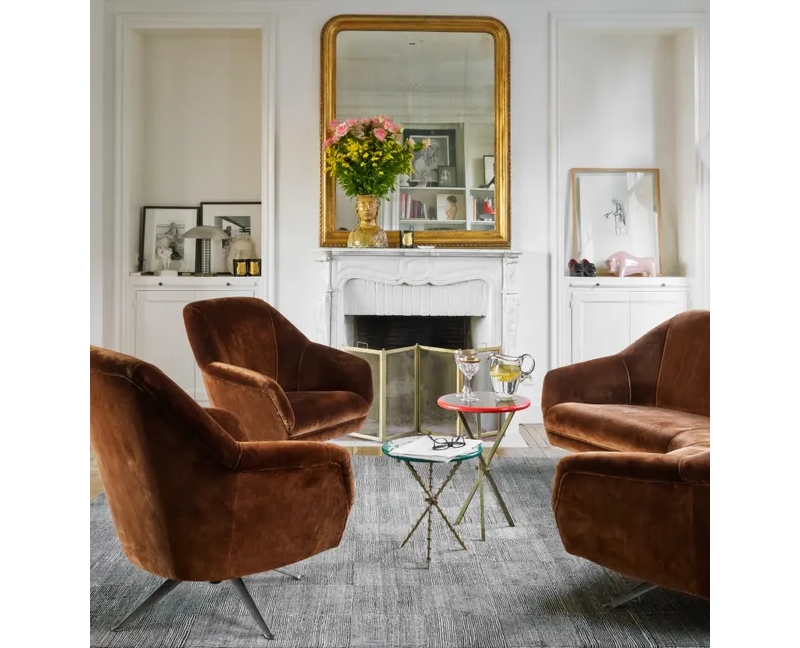 Daring colour mixes, striking furniture and footwear as decoration are the hallmarks of this townhouse in the 20th arrondissement. Photos @Depasquale+Maffini/ @depasqualemaffini.com/; instagram.com/depasquale.maffini/

This article titled “Heart and sole: a shoe designer’s Paris home” was written by Genevieve Fox, for The Observer on Saturday 19th September 2020 15.00 UTC

There’s something childish in the way I use colour,” says Gherardo Felloni, creative director of Roger Vivier. “In the last 20 years, designers went for beige or grey – safe colours. I am completely the opposite. I am spontaneous, and not afraid.”

Step into his three-storey townhouse in the magical Campagne à Paris, a village of cobbled streets and Narnia lampposts in the 20th arrondissement to the east of the city centre, and daring mixes await. A painting of deep and luminous blues hangs in the more formal of two sitting rooms, a pair of 1960s tubular glass sconces originally from the palatial waiting room of the monumental Milan Centrale railway station either side of it. “They are massive, and quite special,” says Felloni, whose comparatively modest home was built as part of a development of 92 houses in the 1920s for working-class families.

The dining chairs are like members of the Addams Family – really strange and dark. I love the contrast

Felloni loves to entertain, but on an intimate scale. “No parties!” The blue room, he says, is “a space to take a drink and a cigarette” before a simple supper in the garden. He designed the room’s trio of concrete and brass occasional tables with his friend Duccio Maria Gambi, persuading him to work in blue concrete rather than grey. “Let’s try to do a blue table – now they match the painting by [Victor] Vasarely.” Their cuboid nature pleases Felloni, who likes strong lines. He was attracted to the rectangular silver Vivier buckle shoe long before he joined the luxury shoe maker in 2018, not least for its marrying of beauty and function.

Today, Felloni’s own designs combine exuberance and elegance with architectural formalism, “but a shoe is not just about comfort or giving confidence, which are both very personal. A shoe is also about colour, embellishment, the story you have to tell.”

His inspiration, he says, “is everywhere. You just need the sensibility to catch it in the right moment.” His home is itself a moment of inspiration that nearly got away. “Four times I cancelled my appointment with the estate agent to see it.” After selling his home in Milan, Felloni wanted a garden but this property in the now coveted Campagne “was just too far from the centre”. He bought it in 2012, a day after the viewing, the peace of this micro arrondissement irresistible.

The house was “falling apart” and a “conservative restoration” followed, the original features, including windows, doors and fireplaces, retained. He moved the kitchen and dining room to the basement, which gives on to the garden. He insists that the rather alarming 1970s dining chairs by Italian designer Vico Magistretti are very comfortable. “They look like members of the Addams family,” he laughs. “They are really strange, and dark. I love how they contrast with the garden and the art deco carpet.” Judging by the expression of the figure in the portrait by Nicolas Party, not everyone agrees.

The ground-floor brown sitting room is filled with the “most beautiful light”. Shoes, books and objets trouvés line the shelves, illuminated by a 1960s Murano chandelier. “It’s the most joyful room. I love the silence. I can watch a movie or read and be with Mina, my cat.” A photograph of 1960s actor and arthouse pin-up Monica Vitti nestles behind a small statue from 1930s Germany, an artwork by contemporary Spanish collage artist Roberta Marrero and a 1940s futuristic table lamp.

On the other side of the mirror, a ceramic bull stands, with whimsical incongruity, beside a pair of vintage Charles Jourdan shoes. This bright house is peppered with shoes – on walls, tables, every surface; mementoes of a career that began in Felloni’s family’s shoe atelier as a child and that took him to Dior and Miu Miu. In the library, there are four pairs on the mantelpiece alone, including vintage Christian Dior sage evening shoes, pastel-pink Vivier pumps from the 1960s perched on a photograph by Italian photographer Grazia Neri, and a pair of diamante mules by Miu Miu.

A collector, like Roger Vivier before him, Felloni has “eclectic” taste, with photography and jewellery particular passions. “I like to see pictures of faces, iconic faces, celebrities not nature,” he says, “and to feel people around me.”

For a man whose levée includes choosing which antique necklace to wear, usually over a dress shirt, it is no surprise that his bedroom includes a dressing room. A still life by American painter Billy Sullivan sits above a mirror and vanity table by Italian architect and designer Gio Ponti for his modernist monument, the Hotel Parco dei Principi, near Sorrento. “I put them here, just like in the hotel suite. I like the idea of hotel life.”

Morning is Felloni’s favourite part of the day. “But if it’s sunny, I am in trouble. I take my coffee to the garden, look at the flowers, cut some stems. Then I can’t leave and I’m late for work!”