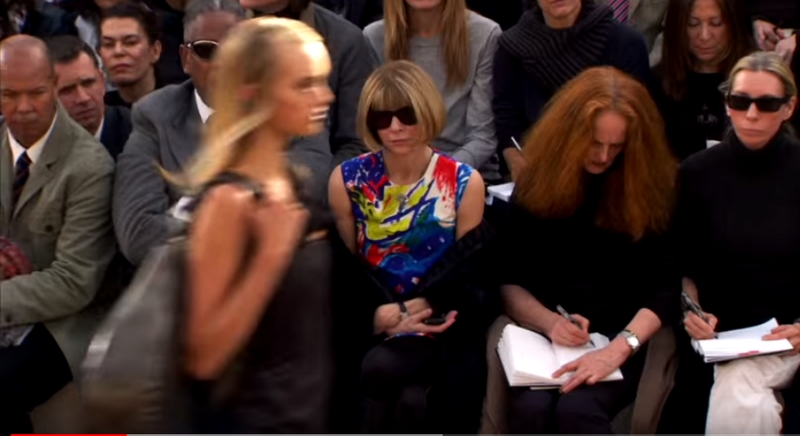 This article titled “Thirty years at Vogue: how Anna Wintour changed the way the world gets dressed” was written by Jess Cartner-Morley, for The Guardian on Wednesday 5th September 2018 08.44 UTC

When Anna Wintour arrived in the editor’s chair at American Vogue in 1988, Ronald Reagan was US president. The White House has seen five further incumbents since then; Wintour, by contrast, has not budged an inch. When the curtain goes up on New York fashion week later this week she will be watchful and inscrutable behind the ever-present sunglasses, the waxed Cadillac curves of her power bob ensuring she can be seen from every seat in the house.

Wintour’s three-decade reign in the front row has seen fashion’s place in popular culture expand from a niche, mostly female interest – an updated version of embroidery, if you like – into a pop culture channel that the whole world is watching. Wintour’s Vogue is where Beyoncé discusses her ancestry and Theresa May wears leather trousers. President Emmanuel Macron is busy courting Paris fashion designers as the chosen ambassadors for his vision of France as a modern creative force; in London, the pulling power of fashion week was proved when Queen Elizabeth attended young designer Richard Quinn’s show last season.

Such is the totemic power of the idea of Anna – she is always referred to by her first name, although everyone abides by an unwritten rule that only her inner circle ever address her in person – that when rumours surface of her leaving Vogue, they quickly become seismic. The approach of the 30-year anniversary of her tenure has revived long-rumbling talk of her imminent departure. Last month’s Condé Nast statement that Wintour would remain in her role “indefinitely” sparked discussion on the exact meaning of the word and conjecture as to how fashion will cope when the industry equivalent of London Bridge falling down does eventually come to pass.

Wintour has changed how the world gets dressed, in a way that has nothing to do with following trends. (“Trends,” she once said, “is a dirty word.”) She is the key architect of one of the prime aesthetics of our era, which is that of soft power. She has always been as much about power as she is about fashion, and her biggest impact has been on the clothes we see on television screens and newspaper front pages, not on catwalks. Two decades of First Ladies in patterned shifts and colourful cardigans; a million brightly coloured, form-fitting dresses worn by newsreaders and TV presenters all over the world; a brace of new-generation British duchesses dressed in slender tailored coats and skin-tone shoes; even Theresa May’s strong-and-stable necklaces and Keeley Hawes’s power bob in Bodyguard – from behind those sunglasses, Wintour has masterminded much of it. That she was repeatedly linked with ambassadorial roles, when she was close to President Obama, may owe at least some of its traction as an idea to how perfectly one can picture it.

Wintour’s personal wardrobe is a masterclass in consistency. “Let it be unique to yourself and yet identifiable to others,” is one of her bon mots on the subject of style. Thirty years in the public eye have seen little change. In warm weather, she wears crew neck, cap-sleeve tailored shift dresses, or else a shirt dress or a shirt with a skirt, always with Manolo Blahnik mid-heel slingbacks the colour of a milky coffee. In cold weather, she teams a statement coat, usually belted, with knee-high boots. She does not wear trousers. She loves colour, and is particularly fond of animal print and graphic designs, less so of florals. She is unrepentantly high-end in her choices. She takes her pick from the top end of US designers, such as Ralph Lauren and Michael Kors, but also has Gucci and Prada run up dresses in her chosen shape in that season’s colours and fabric. She often chooses Chanel Couture for high-profile occasions such as the Met Gala, or when made a dame at Buckingham Palace last year. She refuses to give up wearing fur even now, when most designers have turned their backs on it.

Her personal preferences have changed what we think of as stylish. Although she is rarely seen in public in jeans, her decision to pair a Lacroix jewelled jacket with blue jeans on the cover of her first ever edition of American Vogue, in November 1988, was the beginning of a denim moment in fashion that has never truly gone away since. (The jeans were, she said later, an accident. “The jacket was actually part of a suit, but the skirt didn’t fit Michaela [Bercu, the model],” Wintour remembered in an editor’s letter written in 2012. “She had been on vacation back home in Israel and had gained a little weight.”) Wintour’s lack of enthusiasm for black has been a powerful factor in demoting from its pedestal a colour that was once a uniform for the industry and a byword for chic. (That black lacks screen appeal for online shoppers has added to this trend.) Even her passion for tennis has had an impact. Wintour plays her sport of choice every day at 5am, a personal passion that far predates the athleisure trend. Those sleeveless dresses she loves are, as it happens, the perfect vehicle for showing off arms sculpted by her daily game.

In a culture that fetishises being busy, fashion week has given Wintour a platform to act out a polished, glamorous version of power dressing. She rarely carries a handbag: 20 years ago, she always had a Filofax on her lap at the shows, but now she just has her phone. It is an uncluttered, sleek aesthetic that the true alpha power-players use to distinguish themselves from the rank and file with those lumpy, umbrella-and-gym-kit tote bags. Going bagless at public appearances is only possible for those who – like Wintour at fashion week, or Sheryl Sandberg at Davos, or Gwyneth Paltrow at Goop – have a support team and a car stationed outside. As a visual trick it is maddeningly rarefied, but undeniably compelling, lending a superhero sheen to a woman who seems to be more effective than anyone else in the room without need of water, snacks, tampons or lip balm.

But had Wintour’s reach been confined to those of us who watch her at fashion week, her impact would not have been nearly so profound. As it is, she has been as high-profile in Hollywood as she has been in Manhattan. She is one of the great fictional characters of our age. Her iconography is so deeply engraved in our psyche that Miranda Priestly, the Meryl Streep version of Wintour in The Devil Wears Prada, has become a template for the modern alpha female. The role of Wintour has been played, also, by Wintour herself in the Vogue documentaries The September Issue and The First Monday in May, and in cameos in Zoolander 2 and Ocean’s Eight. How much of the character is based on real life is anyone’s guess. But even after 30 years, the audience can’t get enough.