A veritable sculpture incorporating a blend of art and craftsmanship and limited to just 99 examples, Strom‘s “In Memoriam HR Giger watch” appears to have several lives, revealing different faces depending on the light and angle from which it is viewed.

Deeply saddened by HR Giger’s death in 2014, luxury watchmaker Daniel Strom waited three years before presenting the public with this jointly produced watch, which was also one of the final projects on which the artist worked. In tribute to the man who became his friend, Daniel named it “In Memoriam HR Giger”. 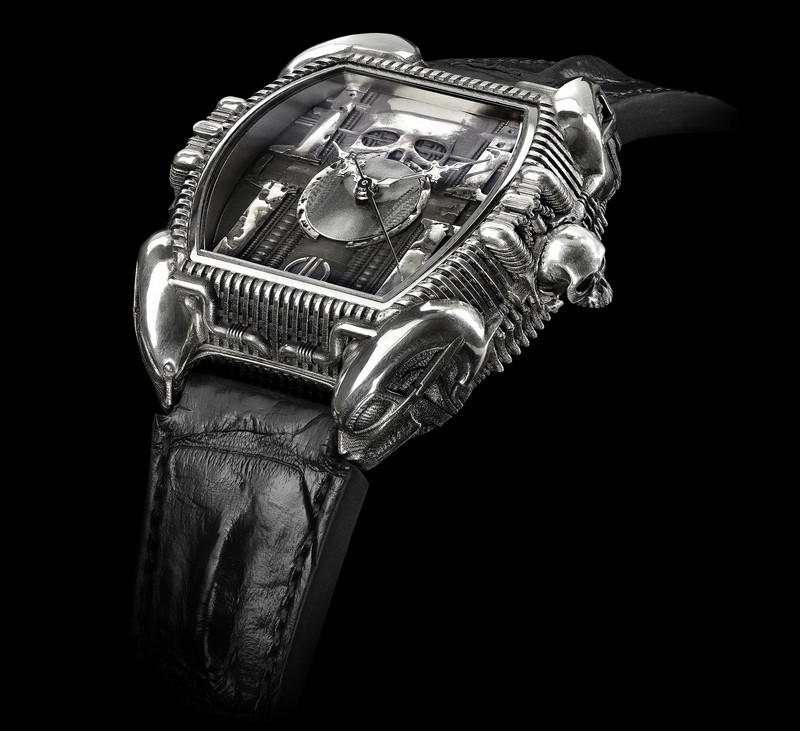 Daniel Strom is passionate about a lot of things. Motorbikes, fine engineering,myths and legends… as well as art, painting and sculpture. He is particularly sensitive to works by HR Giger, whom we have to thank for the space creature in the first Alien movie by Ridley Scott in 1979, and for which the Swiss artist won an Oscar in 1980 in the “Best Visual Effects” category.

Years after this legendary movie was launched, a client and fan of the world of Agonium, who happened to be a friend of this master of the incredible, presented Daniel with a chance to meet HR Giger. “This person invited me to his home in Zurich in the most natural possible way” the watchmaker remembers. “When I showed him my Agonium and said I would like to create a watch with him, he accepted immediately.” 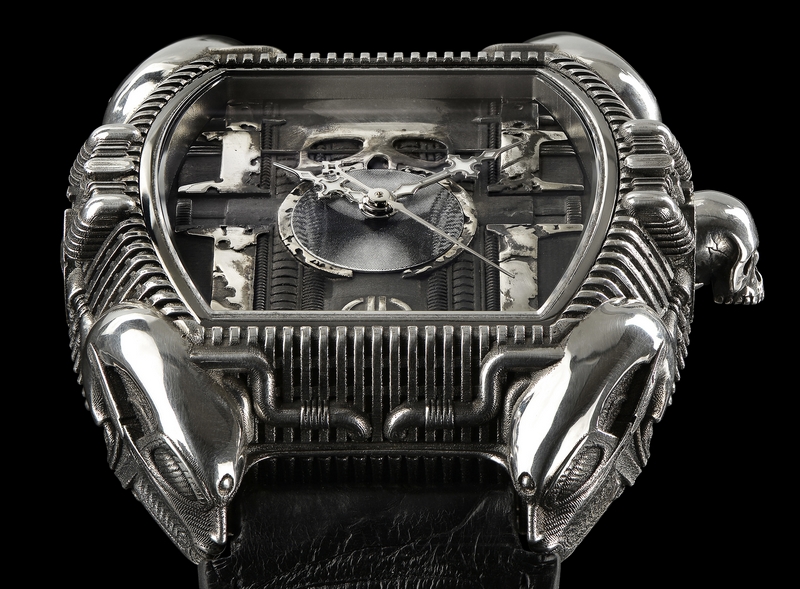 From one legendary work to another

The idea was initially to produce a dial inspired by one of HR Giger’s best-known works: his 1973 “ELP II” canvas (work no.217), painted with an airbrush in a single night.

“For me, this highly sensual feminine mouth on a skull is the perfect embodiment of transience, the ephemeral nature of existence” explains Daniel. “Unfortunately, I never had a chance to admire the original work that was stolen in 2005 and never returned to its rightful owner despite the presence of tangible clues. But that didn’t prevent us from reproducing the work on the dial, and above all, from recreating its fascinating 3D relief, thanks to a cunning blend of 3D technology and craftsmanship.”

Once the dial was made in molten silver, blackened and hand-polished, the artist and watchmaker decided to take things to the next level and also create an Agonium case embodying Giger’s incredible universe.

It is here, as if it were the most natural thing in the world, that we find the famous elongated skulls of the biomechanoid sculpture displayed at the entrance to the HR Giger Museum in Gruyères, Switzerland.

Emerging from the material, four gleaming heads of this Cyborg creature extend from the lugs, while its body parts are etched into the case middle in a set of perfectly executed structures. All, of course, produced by hand, as is the strap buckle also inspired by the emblematic biomechanical world of the works of HR Giger. 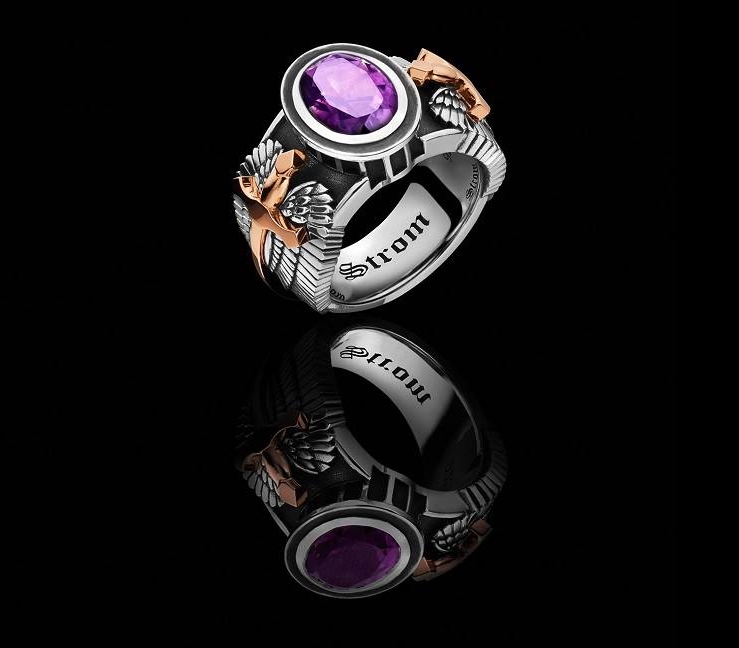 Strom’s Agonium Collection includes not only watches but also beautiful handmade jewellery like the Michaeli ring. The ring features silver and redgold and an amazing amnethyst stone. 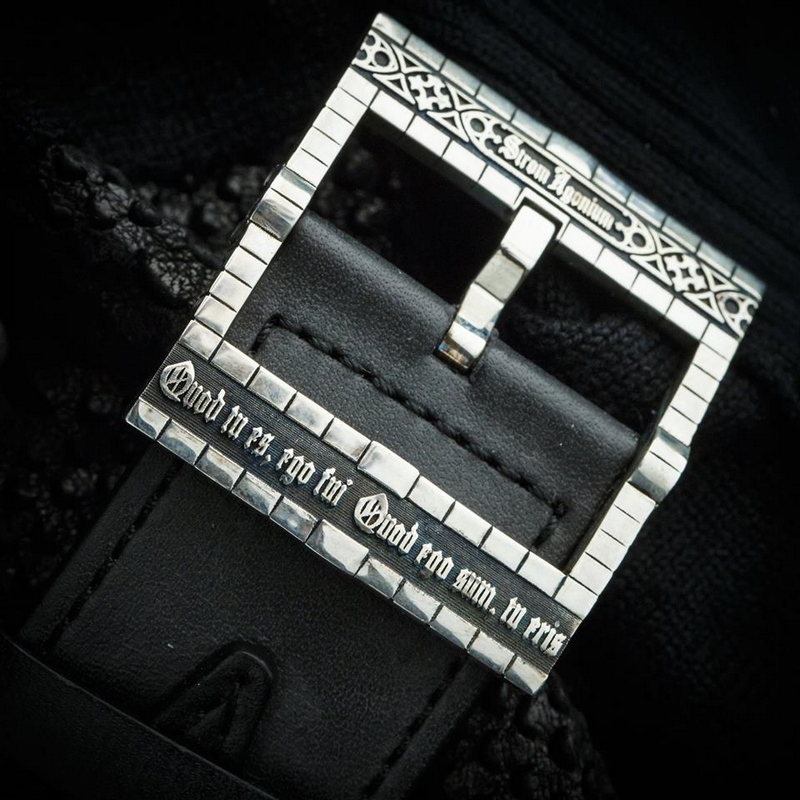 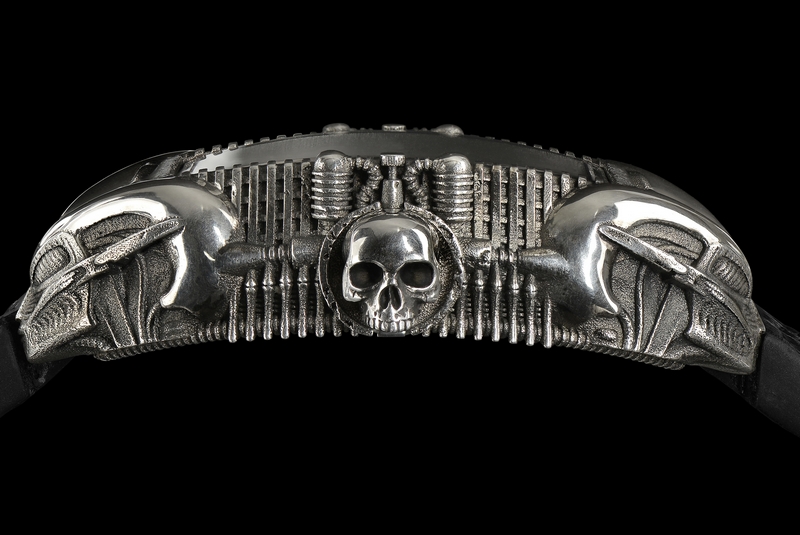 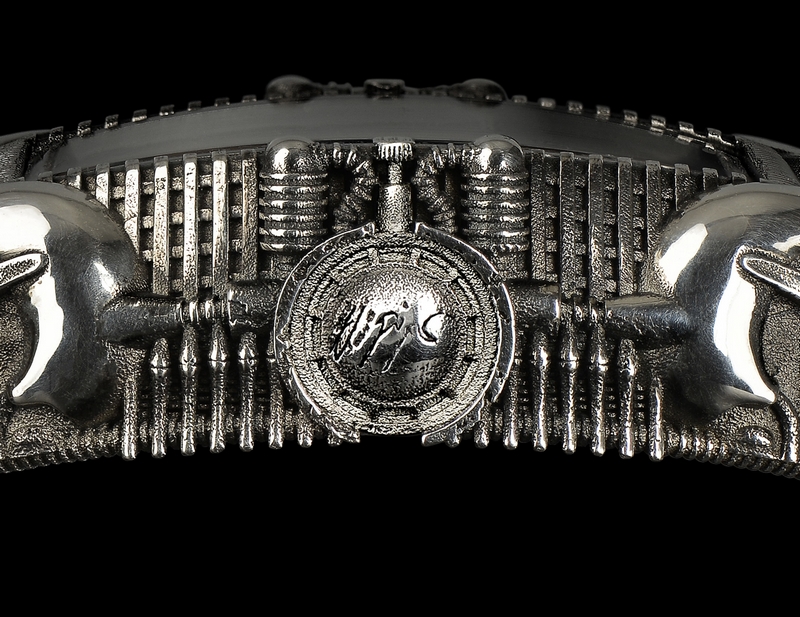 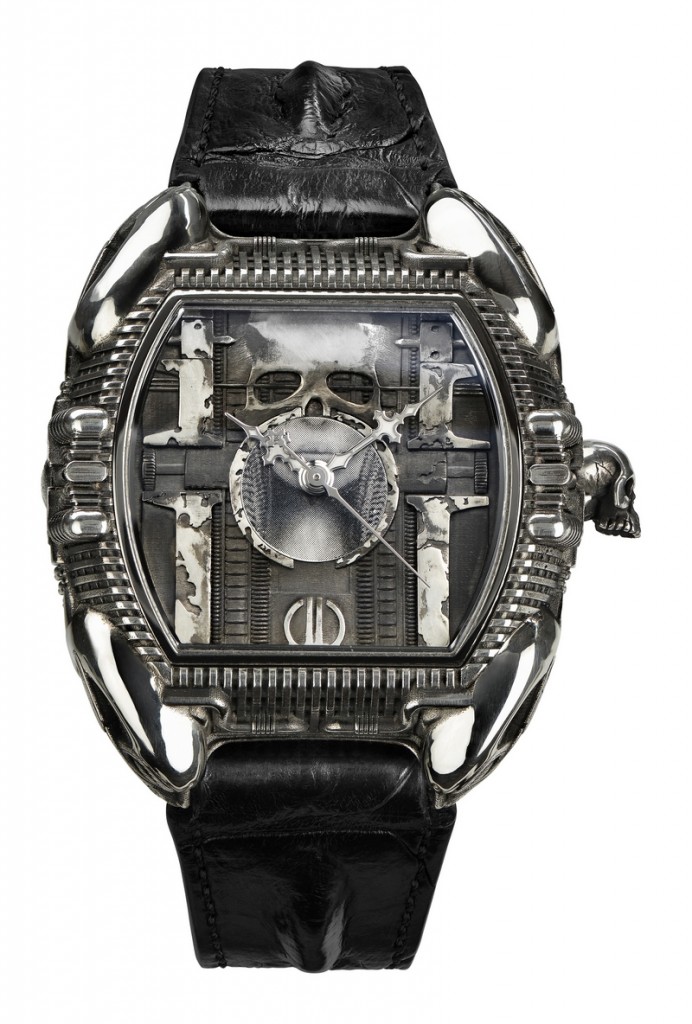 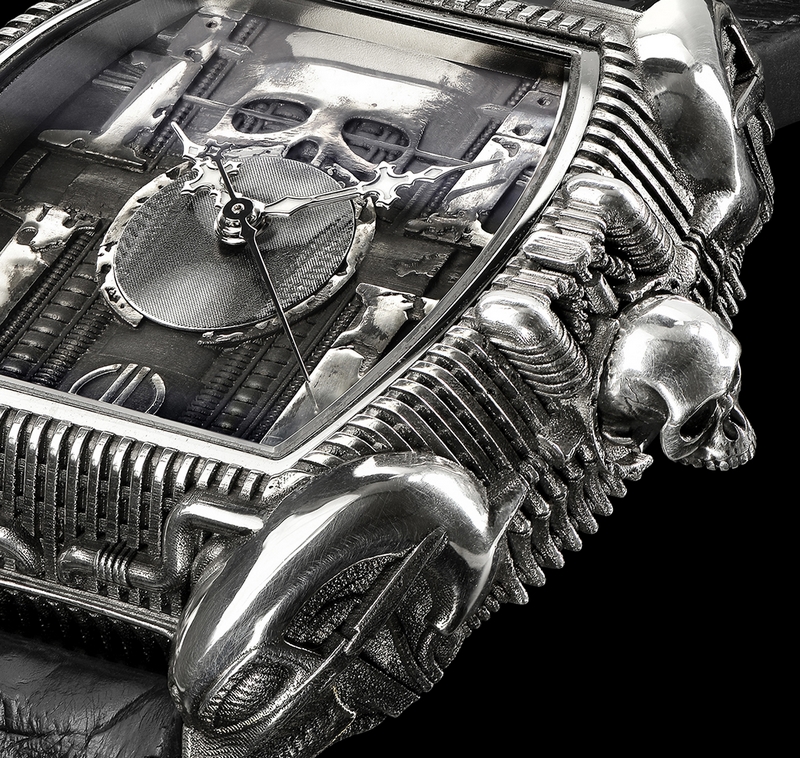 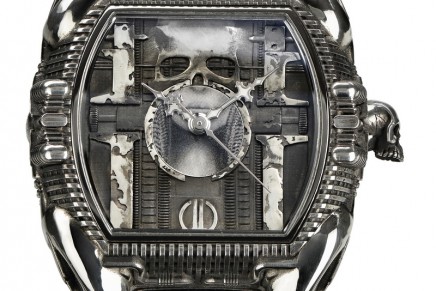 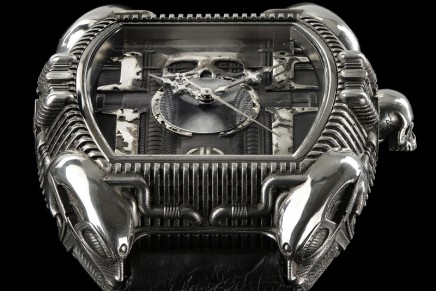 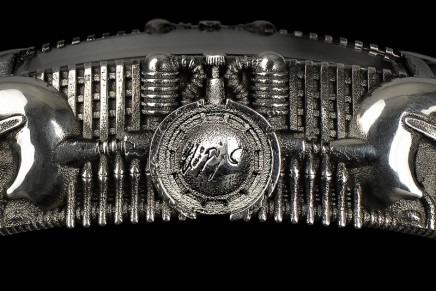 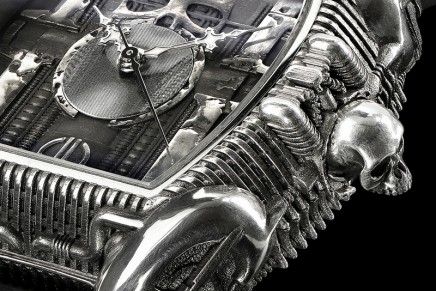 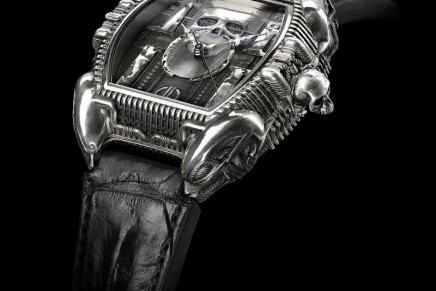 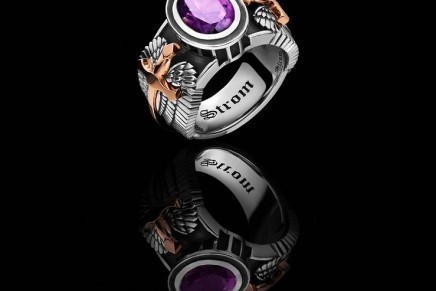 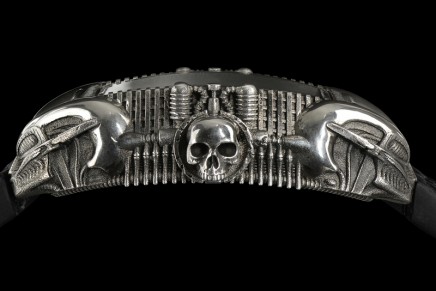 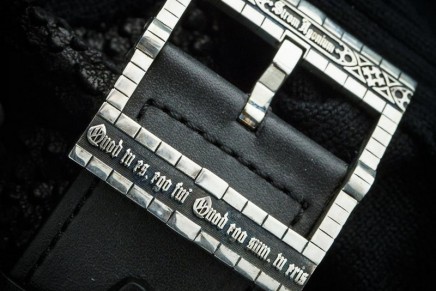