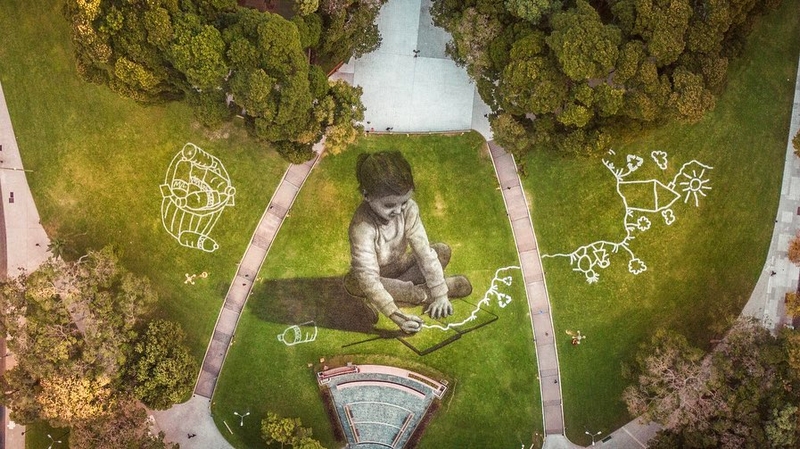 This article titled “Saype’s grassy graffiti: meet the street-art sensation who sprays mountains” was written by Angelique Chrisafis, for The Guardian on Wednesday 5th June 2019 14.03 UTC

On a vast stretch of lawn beneath the Eiffel tower, a paint-splattered figure in a baseball cap is kneeling down, carefully planting small wooden stakes into the grass, checking each is aligned with a tape-measure.

It’s an odd sight in the park beneath Paris’s main tourist attraction, but in the morning rush, few people pause to wonder what he is doing. They simply continue trampling over the grass, or let their dogs bound over it. “I’m used to all kinds of hazards to my work,” shrugs the artist Saype. “If it’s not the weather, it’s cows walking over it, or moles popping up, and here it’s dogs. I take it as a lesson in humility.”

Saype — real-name Guillaume Legros — is one of France’s newest street art sensations, a rural graffiti artist who, instead of working in urban settings, creates his own brand of land art: massive biodegradable paintings on enormous stretches of grass on mountainsides.

Where land art was traditionally about building epic works from rocks and natural materials on the ground or mowing and carving shapes into the landscape, Saype instead spray-paints ultra-realist, street-art images of local people on to the grass itself. His scale is gigantic – covering huge swathes of fields and mountains using his own recipe of homemade biodegradable paint. From a woman’s face on fields in the French Alps to a giant grandad in braces on a Swiss mountainside or a child in a Russian clearing, his works are visible from the air — a new artform for the era of drones — and don’t last long, soon disappearing again into the landscape.

But now Saype is returning to cities, transforming parks into huge portraits visible from the sky that comment on the climate emergency or the refugee crisis.

The 30-year-old is the first artist ever allowed to take over the hallowed Champs de Mars lawns under the Eiffel Tower. His vast new project, Beyond Walls, will see him spray-paint a series of interlocked hands across the lawns here this month, stretching over hundreds of square metres. They will make little sense close up on the ground, but will be visible from the top of the tower.

To him, it’s a “human chain” and “a symbol of togetherness at a time when people are more and more turning in on themselves”. He will paint similar images of hands and arms clinging to each other in cities across the world over the next three years, aiming for locations from Nairobi to Belfast. For him it’s about “living together”, moving beyond borders and remembering history. His great-grandparents, French Resistance fighters in rural eastern France during the second world war, died after they were deported. “Right now, it seems like we’ve all got short memories, that we’re living in a kind of negative, prewar atmosphere with economic crisis and people putting up barriers,” he says.

Beyond Walls is also the first time he has ever worked on a project with a newspaper. He has produced three images of interlaced hands which will be printed from this Saturday on the Guardian’s new biodegradable, potato starch wraps that package the weekend print supplements. Saype sees the groundbreaking eco-friendly packaging as a way to bring his images “from the mountainside into people’s homes”. If his transitory art on grass is destined ultimately to fade away, he liked the notion of making art that would be composted into oblivion in Guardian readers’ bins. “I love the idea that nothing is left of it,” he smiles. “And what really interests me is how people will interact with it – how will they rip open this bag? I find that act really symbolically interesting. The art will be on the compost heap, but the image will stay in the mind.”

The images themselves carry their own mystery. The hands gripping each other could be an act of rescue, survival or friendship. The work comes from photographs he has taken, but exactly whose hands are pictured we will never know. Saype deliberately chose not to know himself. His inspiration was the humanitarian group, SOS Méditerranée, and their rescue work pulling people in distress from the Mediterranean, the world’s most deadly migration route.

Last year, in central Geneva Saype created a vast grass fresco of a girl with her hand outstretched towards a paper boat on the lake in support of their rescue work. For Beyond Walls, he set up a camera at an SOS Méditerannée gala night and took pictures of anyone who would have their arms and hands photographed. Among them were rescue workers, sailors, refugees themselves – many who had survived the crossing from Libya – but also politicians and footballers as well as the fashion designer Agnès B. He took around 2,000 photos – cut off at the elbow – and selected a few without knowing who they were. “Hands always tell a story, you have tattoos, bracelets, the hands of those who have done manual labour and those who have not,” he says. “Each of these hands will tell a story but we won’t know where from.”

Many European street-artists grew up on housing estates in the hinterlands of capital cities, including Saype’s heroes: the acclaimed Paris photographer JR, who pastes monumental images on building across the world and the celebrated Portuguese artist Vhils, who uses hammers and drills to carve vast faces into walls. But unlike them, Saype comes from a tiny village in eastern France and worked for years as a nurse. His spray-paint art in fields with cows deliberately conveys a rural innocence.

Saype grew up in Évette-Salbert, near the Swiss border. His mother operated x-ray equipment at a hospital, his father worked in IT. “I never went to a museum or a single exhibition as a child,” he says. He started graffiting and spray-painting aged 13 “as a kind of adrenalin kick and a way of existing in society”. Countryside graffiti didn’t always have obvious locations. “At the start, all there was was the wall of a tennis court or an abandoned house.” Gradually he moved to graffitiing the nearest town, “under bridges or trains”.

There was so much visual pollution in cities that no one really saw graffiti any more. So I wanted to find another way to get people’s attention

At 18, he was sitting in the back of his high-school philosophy class doodling the letter-shapes he most like to graffiti. He realised those letters made the English word “say” and added the first two letters of “peace”. That word, Saype, became his nom de guerre.

Soon he progressed to ultra-realist portraits, travelling to Paris to photograph people on the Métro and then painting them in black and white. For years he combined street art with full-time work as a nurse. He says a nurse’s “daily confrontation with human suffering, ageing and illness” pushed him to keep painting people. Until now, in his land art he has painted either young children or the elderly, the elderly “because normally you don’t see that in street art.”

He shifted gradually from urban walls to spray-painting country landscapes. “I felt urban art had lost some of its meaning — there was so much visual pollution in cities that no one really saw graffiti any more,” Saype says. “So I wanted to find another way to get people’s attention.” It was also about the climate emergency. “I’d read a scientific article saying that if we didn’t drastically change our approach to nature before 2020 we’d reach a point of no return in terms of climate, and here we are now,” he adds. But it was also because drones had become available to the public, opening up view points from above. “You could have another view of the world very easily.”

It was crucial that his paint on grass left no negative impact. Saype spent a year experimenting in his parents’ garden making biodegradable paints, first cooking up a kind of flour and water paste, which would both stick to the grass and prove briefly waterproof. Currently he uses a recipe of chalk for white, charcoal for black mixed with casein milk protein and pigments, while he searches for a totally plant-based option.

His works, aided by two schoolfriends from his village, as well as SOS Méditerranée volunteers for the Paris project, are massive logistical operations. Designed to be seen from a distance, the work can barely be made out close-up, hence the need for wooden markers. “When I paint, I can’t see what I’m doing. It’s very philosophical – if you’re emotionally too close to something, you see nothing. It’s only when you step back that reality hits you.”

The Paris project will take over 1,300 litres of paint, weeks of work and yet he estimates that once it is unveiled on 15 June, it will only last two days after people walk all over it. That’s all part of the “artistic performance” as he calls it.

“I always set out to have an impact on people’s minds and memories, without leaving much of a trace. For people to reappropriate my work by walking all over it, that’s no problem to me. I paint on something impermanent, which is constantly changing,” he says. “I paint, I come back the next day and it’s different. People say it’s ephemeral, short-lived. But that’s my point – isn’t everything?”