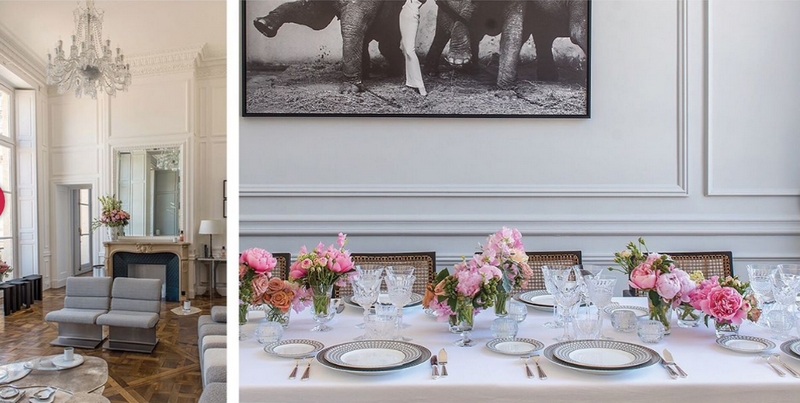 This article titled “‘Napkins are the new fashion’: the improbable rise of tablescaping” was written by Hannah Marriott, for The Guardian on Wednesday 14th October 2020 09.00 UTC

In August, Dawn Batten, who runs an interiors Instagram account focusing on thrift and upcycling, found herself layering her favourite willow-pattern crockery with blush-pink bowls and plates from Poundland. “It was just me playing around with layering the plates to see what I could create from what I had,” she says. She didn’t know “tablescaping” was a term until she looked for a hashtag for the resulting picture. “I was hovering on one leg to take that photo,” adds Batten, which is classic tablescaping behaviour.

Layering crockery is classic tablescaping, too. As it sounds, tablescaping is “a decorative arrangement of ornaments or other objects on a tabletop”. For the past few years, the trend – and the posting of the pictures of your dinner table groaning with tasteful crockery, candles and other accessories online – has mushroomed.

But it was in lockdown, perhaps inevitably, that tablescaping became a phenomenon. With so many of us working from home, our social lives disappearing and desperate for some comfort, our focus on our homes was never sharper. As the pandemic took hold, so did sourdough baking, DIY projects, and loungewear. All of which pointed to a country whose nesting instinct was on high alert; and what could be more natural than the desire to make our immediate surroundings snug, restful, happy sanctuaries? Tablescaping, a small joy that can take a few minutes or a few hours, and makes dinnertime instantly prettier, was part of this national self soothing.

Thanks to social distancing and unbridled screen time, the “tablescape” hashtag now has 455,000 Instagram posts and counting, and it is lifting sales during the crisis. As other industries languish, napkins and tablecloths are up 109% and 102% year on year at Argos, while, at Selfridges, during the past six weeks, sales of table linen have doubled. TV presenter Laura Jackson talks enthusiastically about setting the table with whatever you already own, sourcing napkins from charity shops and stealing a few sprigs from a hedge to put in a vase.

There are broadly three types of tablescape. The first is themed and handmade, born of imagination and a glue gun. A meadow scene complete with Easter bunnies, for instance, or a Halloween table covered in cotton wool in place of dry ice, perhaps. The second is the rustic kind, in which the tablecloth is slightly creased, the candlesticks are artfully wonky and lemons are casually strewn across the table. The third is highly formal – essentially replicating silver-service dining with designer crockery and crystal glassware. This is where layering often comes in. “We like to work in a series of three,” says Louisa Preskett, of the high-end tablescaping rental company Maison Margaux; usually “place mat, dinner plate and pudding plate” and three glasses, too (wine, champagne and water). Add bamboo cutlery, and napkins “folded in a beautiful way”, tapered candles and flowers, “and you’ve got something really special”.

Whatever your tablescaping tribe, napkins are high-priority. Decorative napkins, says Nick Vinson, an expert in design and interiors for Wallpaper* magazine, “have never been so popular”. Vinson was alone for 10 weeks in lockdown, and used to “get a nice napkin out”, as a way to turn his elevenses snack into a proper treat. “Napkins used to feel so stuffy and alienating,” says Jackson. “But they don’t any more – they are fun and affordable. It’s like napkins are the new fashion.”

In the before-time, the renewed interest in setting the table felt like a millennial craving for a more convivial way of life, a reaction against the previous generation’s rushed breakfasts and TV dinners. It was also a way of showing off, with social media posts from picture-perfect dinner parties acting as a fomo-trap for the uninvited. Nowhere was the one-cup-manship more pronounced than in the luxury world, which is where Preskett thinks the trend started, about five years ago. VIP guests were posted photographs of their table settings from brands’ events. The brands began competing. “So Hermes had to have a more fabulous tablescape than Louis Vuitton, which had to have a more fabulous tablescape than Cartier.”

But in lockdown, with the hospitality industry on pause, tablescaping took a different direction. For one thing, it provided an income stream – or at least a trickle – to companies whose businesses might have capsized in the crisis. It may even help the fashion industry, with brands from Primark to Preen focusing on homeware as sales of party dresses plummet.

The events designer Fiona Leahy is credited with popularising the practice in the UK; her past creative hits include a Dior dinner with London landmark centrepieces, from which celebrity guests stole mini London Eyes and tiny London Bridges. “I’ve done things for work I would never have been able to do in real life,” she says, explaining how she has been accused of “taking my fantasies out on my tables”. She describes her aesthetic as “the opposite of baby shower”, meaning that while there may be a lot going on, the aim is to be “zeitgeisty – channelling moods and feelings using the medium of the table” rather than covering the table in bows for the sake of it.

Lockdown changed the rhythm of her days considerably. “We were just at home with our tables, our napkins and our decisions in life,” she jokes, so she started posting photographs celebrating the art of dining for one, on a tray, (#trayscapes, inevitably). The idea was to show that “solitude can be celebratory”, she says. “The reason I love what I do is that it’s not decadent for the sake of it. There’s something very convivial about elevating the mundane by setting a tray or table.”

Jackson, who runs supper clubs, as well as presenting TV shows, also encouraged her 129,000 followers to set the table once a day, even if they were eating something as simple as cheese on toast, and post the photographs with the hashtag #makeamealofit during lockdown. She has since launched a food delivery box, which costs £62 including tablescaping bits and dinner for two – about the same price as going out for dinner, but you get to keep the napkins. “I found structure really hard during lockdown,” says Jackson. “So I started to focus on setting the table to punctuate the day. You’re creating an experience, a sense of occasion.”

In a time of mass powerlessness, it makes sense that some would seek control around the dinner table. Dining customs have always been about proving ourselves to be immune to the vicissitudes of the natural world. As Margaret Visser wrote in The Rituals of Dinner in 1991: “One of the more spectacular triumphs of human ‘culture’ over ‘nature’ is our own determination when eating to avoid touching food with anything but metal implements.”

Still, not everyone is on board. Like many female-skewed pastimes, tablescaping has been dismissed and derided from the beginning. In the US, the high-profile chef Sandra Lee popularised the term on her TV show in the 00s. “There were several personalities within the industry that were quite dismissive and even outwardly insulting about many terms I coined. I ignored them. Ironically, these same people now use my terms to describe their own decor/works,” she writes, over email.

In Leahy’s world, “I’ve even heard people say ‘table escaping’ because they are so bloody sick of it.” And while it is Leahy’s job, she knows that parading “a gazillion fancy napkins” could be “perceived as Marie Antoinette-ish at a time when people are suffering”.

Certainly, tablescaping has more than its share of wealthy proponents, their dedication to posting photographs of truckloads of expensive plates on social media during lockdown as ripe for psychological analysis as the rest of us bulk buying toilet roll. But, to be fair, many more are tablescapers on a budget, not in it for the display but the creativity.

In the US, tablescaping is so established that it has become a competitive event at county fairs. “They call me the queen of theme,” says Bonnie Overman, an ophthalmic technician and multi-award-winning tablescaper. “What excites me is not the dishes, forks and spoons, but creating a theme,” she says. She tells me about gluing hundreds of sequins on to a tiny pair of high heels for a Wicked table and producing an ode to Breakfast at Tiffany’s with jewellery busts and a mirrored tabletop.

In competitive tablescaping, participants are judged not only on show-stopping tableau, however, but on the correct deployment of cutlery, crockery and glassware for an imagined menu. Overman has had her disappointments, over the years, like the time she “screwed up Phantom of the Opera” because “I did not switch my forks. Every once in a while I do make mistakes,” she says. Ruminating on the highs and lows of a 25-year tablescaping career, in which six months of preparation can suddenly go down the pan over a misplaced spoon, she describes the process as “agonising. I have a love/hate relationship with it.”

With county fairs closed indefinitely, and Overman being unable to work or see her grandchildren, she has started a YouTube channel, which, she says, “is the one thing that saved me from complete depression”. She hopes visitors to the channel – in which she shares a number of projects including tablescapes past – will be inspired to use crafts to make this Halloween and Christmas special: “We want to have some good memories from this year,” she says. “Everybody needs passions in life. If you go through the year without celebrating the holidays and having passions, life is just one big blob,” she says, speaking for tablescapers everywhere.