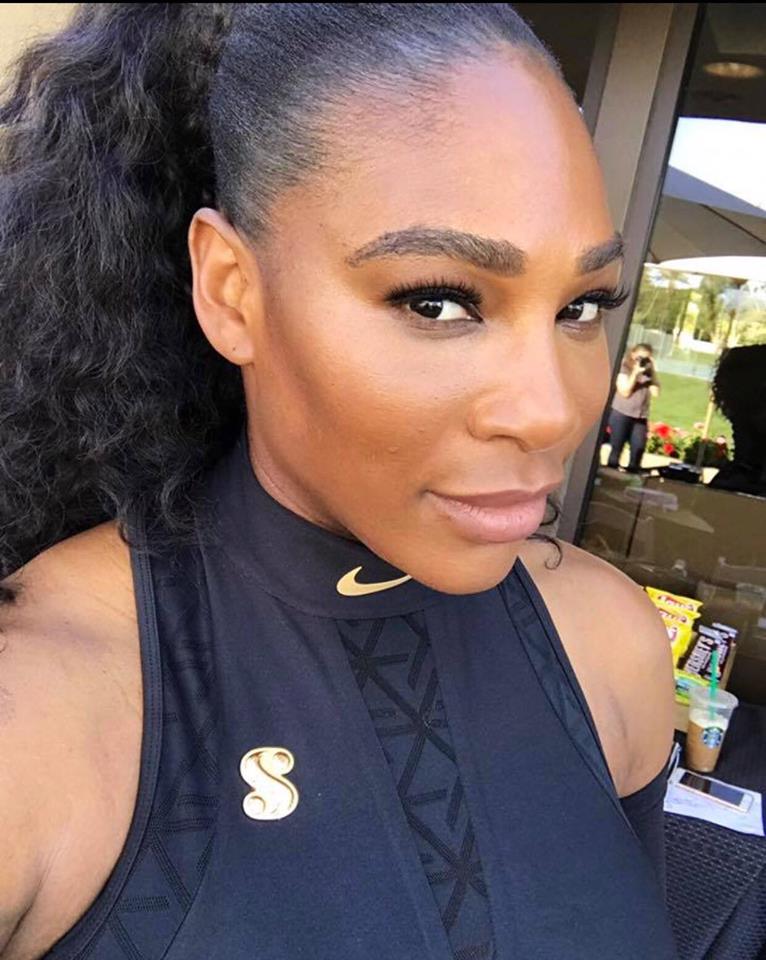 This article titled “My kind of fashion icon: Serena Williams has redefined how a tennis player should dress” was written by Charlie Brinkhurst-Cuff, for theguardian.com on Friday 1st June 2018 11.38 UTC

At the French Open this week, Serena Williams, with her hair cornrowed and braided into a twisted bun, smashed her way into the second round of the competition, beating Kristyna Pliskova 7-6 (4), 6-4 in her first grand slam since giving birth in September 2017.

It was a return to form made all the more noticeable by what she was wearing – a black catsuit, which cinched at the waist with a thick band of red fabric. The outfit seemed to announce two things: first, that having a baby would not hold her back from continuing her tennis career – the catsuit was designed to prevent the return of life-endangering blood clots she faced after giving birth. And second, the launch of her own fashion line, Serena.

In the past, some factions of the press have viewed Williams as being the antithesis of stylish – the Telegraph noted her and sister Venus’s ‘outrageous’ tennis outfits through the years, while the Sun called some of Serena’s outfits ‘eye-popping’ and not fit for the tennis court.

But so far, the reaction to her new athleisure line – which is priced from $40 for a sports bra trimmed with the initial ’S’ and up to $215 for a black and gold ‘knockout’ hooded jacket – has been positive. While the catsuit sadly doesn’t show up, the line features a white tailored sports dress replete with racing stripes, a comfortable grey and pink cropped sweatshirt and sweatpants, an olive-toned, silky, sexy slip of an evening dress and – in a move which harks back to her infamous denim miniskirt and thigh-high black boot combo of 2004 – a dungaree dress.

Williams has undoubtedly redefined how a tennis player should behave – and dress. The catsuit, she said, made her feel like a warrior princess superhero from Black Panther’s homeland Wakanda. Other recent fashion moments have included her wedding day, where she floated down the aisle in a puff of fairytale magic wearing a huge tulle dress that included a cape, her appearance in Beyoncé’s 2016 ode to black femininity, Lemonade, where she twerked in a diamanté bodysuit, and the brand new cover of Harper’s Bazaar, where her off-the-shoulder silken beach cover-up reveals a simple, striking black swimsuit. One of my personal favourites is from 2008, when she took to the Wimbledon court in a trench coat.

Although her fashion line at the moment only goes through sizes small to extra large – something she is being criticised for – it’s testament to an impressively resilient mindset that Williams has produced clothing that nonetheless show off “strong, sexy, sophisticated” body shapes. I’ve written in the past about the influence her positive attitude towards her figure has had on someone like me, a woman who finds it easy to gain muscle, and has been shamed for having a ‘manly’ body shape. During another outing for a catsuit she wore to play in 2002, she told reporters: “If you don’t have a decent shape, this isn’t the best outfit to have.”

Last year, Williams, who has been criticised since the beginning of her career for her looks, wrote an open letter to her mum on Reddit where she revealed that her daughter has the “exact same strong, muscular, powerful, sensational arms and body”. She reflected on her on career trajectory and the fact that she had “been called [a] man because I appeared outwardly strong”. The letter clarifies that while these things have affected her, she’s always been strong enough to overcome them. “I am proud we were able to show them what some women look like. We don’t all look the same,” she wrote. “We are curvy, strong, muscular, tall, small, just to name a few, and all the same: we are women and proud!”

The fashion line has been a long time coming. On Twitter on Thursday, Williams noted that at one point she actually toned down her training schedule, in 2001 when she was just 18, to attend fashion school at the Art Institute of Fort Lauderdale. “I chose to play a light tennis schedule because I wanted to go to fashion school,” she explained. “Some criticized my decision, but I knew I had two loves – tennis and fashion – and had to find a way to make them coexist.” From there, it was a battle to get her designs out to the public – although she has worked with HSN and Nike on collections, she said that every time she approached a department store with her vision, they said “we love it but we are going to pass”.

Her next move was to launch the 12-piece collection on her own terms – through her own website – and announcing the launch on her own Instagram page. She describes the range as “for women who stop at nothing”, promoting it with the hashtag #BeSeenBeHeard. When a big multinational uses empowering language to sell clothes it can feel trite. With Serena, it feels authentic. So, too, does her inspiration, her nine month daughter. “Ever since [giving birth to] Olympia I was like, ‘Okay I have a daughter, I want her to feel good about herself.’ She is strong already, so I want her to feel beautiful and I want to spread that message through the collection,” she told Harpers Bazaar.

Apart from anything else, it’s a shrewd business move as she returns to tennis, 16 months after her last grand-slam winning tournament where she played while three months pregnant. Her personal brand has never been so strong – and even the tabloids seem to have stopped painting her in such a negative light for being a black woman who dares to have a strong voice, personality and body frame. Apart from anything else, this latest move from Williams shows that her life has always been about more than tennis. It’s about pride, passion, blackness, empowerment and fashion, too.