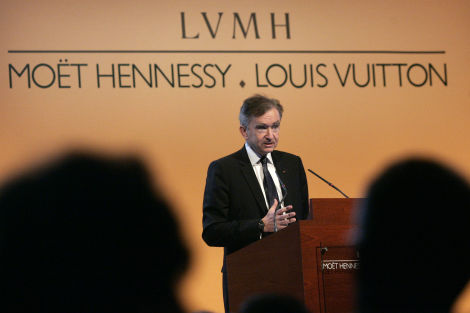 LVMH Moët Hennessy Louis Vuitton, the world’s leading luxury products group, recorded revenue of €13 billion in the first half 2012, an increase of 26%. Organic revenue growth was 12%.

“All business groups contributed to this performance, which is even more remarkable coming on top of the strong growth in first half of 2011. The Group continued its sustained growth in the US, Europe and Asia,” said the company in a statement.

“LVMH’s excellent performance in the first half, once again, demonstrates the exceptional appeal of our brands, the attraction of our high quality artisanal products and the pertinence of our strategy,” commented Bernard Arnault, Chairman and CEO of LVMH.

“A host of initiatives, including constant innovation, successful iconic product lines, the development of our craftsmanship and targeted expansion, reinforce our Maisons. We approach the second half of the year with confidence and are relying upon the creativity and quality of our products as well as the effectiveness of our
teams to pursue further market share gains in our historical markets as well as in high potential emerging
markets.”

Highlights of the first half of 2012 include:

Continuing the very favourable trend of 2011, demand in the first half of 2012 remained strong. The Wines & Spirits business group recorded organic revenue growth of 15% supported by volume growth, improved product mix and its continued adapted pricing policy. Profit from recurring operations increased by 20%. Volume growth continued for champagne, driven mainly by the prestige vintages. Hennessy cognac also saw volume growth, an increase to which all the qualities contributed. Performances in Asia and the US were particularly strong, according to the luxury group.

LVMH’s  Fashion & Leather Goods business group recorded organic revenue growth of 10% in the first half of 2012. Profit from recurring operations increased by 10%. Louis Vuitton continued to register exceptional performance, confirming the brand’s strong appeal to its global clientele. All its business lines contributed
to this momentum. A number of products have waiting lists. The opening of the Maison Louis Vuitton in Rome was a highlight of the first half. Louis Vuitton is always driven by its incomparable creative capacity, and by the fact that it is the only luxury brand in the world to sell its products exclusively through its own store network. Fendi benefited from the sustained growth of the iconic Baguette bag, which celebrated its 15th birthday.

LVMH’s  Perfumes & Cosmetics business group recorded organic revenue growth of 9%. Europe posted good growth over the first half and Asia confirmed its strong potential. Within the context of continued investments, profit from recurring operations increased by 9% compared to the first half of 2011. Driven by the exceptional global desirability of the brand, Christian Dior continued to demonstrate strong momentum supported both by the brand’s iconic products and innovations: continued growth of the perfumes J’Adore, Miss Dior and Dior Homme.

The makeup and skincare segments made further progress. Guerlain benefited from the promising results of itslatest creation La Petite Robe Noire launched in France in the first half. Givenchy’s growth was driven notably by the roll-out of the perfume Very Irresistible. Benefit and Make Up For Ever maintained a high level
of growth.

In the first half of 2012, LVMH’s Watches & Jewelry business group recorded 13% organic revenue growth. Profit from recurring operations increased by 87%, notably as a result of Bulgari’s performance, consolidated since June 30, 2011.

In jewelry, Bulgari reported an excellent performance across all of its product lines and benefited from the growing success of its Serpenti collection. The watch brands saw record orders during the watch fairs thanks to the strength of their iconic product lines and the excellent reception given to their innovations.

TAG Heuer launched a new range for women, Link Lady, which has already been a great success. Zenith enriched its Pilot collection with new and particularly original models and Hublot launched its first models made with innovative materials perfected by its research laboratory.