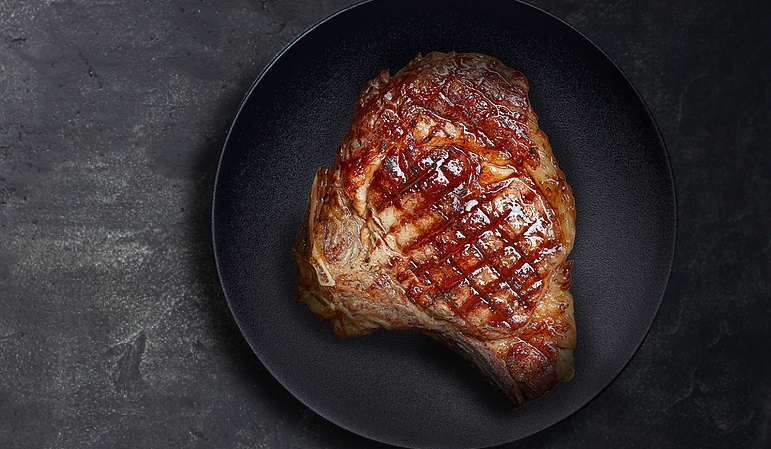 This article titled “How do you like your beef… old-style cow or 3D-printed?” was written by Gareth Rubin, for The Observer on Sunday 10th November 2019 06.18 UTC

After the success of the Greggs vegan sausage roll and the juicy-yet-meatless Impossible Burger, the next new food sensation is coming to a plate near you: 3D-printed steaks and chicken thighs.

Printed meat could be on European restaurant menus from next year as Israeli and Spanish firms serve up realistic beef and chicken produced from plant protein. And, within a few years, the printers are likely to be available to buy so that consumers can produce their own at home.

Layers of material are built up by 3D printers until there is a solid object conforming to very precise specifications. The meat can be produced either from vegetable matter or from animal cells grown in a lab. The printer uses these raw ingredients, which come in a Nespresso-style cartridge, to build up a steak or chicken fillet that tastes like the real thing.

Eshchar Ben-Shitrit, co-founder and CEO of Israeli firm Redefine Meat, said switching to printed meat would have huge ecological benefits. “The biggest reason for going to alternative meat is because of the future of our planet,” he said. “We love meat but we don’t have enough resources for it. Cows require a lot of water, a lot of food and a lot of land but we don’t have enough of any of these. We can recycle, drive electric cars, we can shower less, but these changes can’t compete with reducing consumption by one hamburger per week.”

Reducing beef production would result in a huge reduction in CO2 emissions and far less clearance of wild countryside for grazing land. Other meats, such as pork and fish, will soon be added to the menu, reducing the need for pig-rearing or fishing.

The health benefits are substantial too, said Ben-Shitrit. “If you eat meat, there are nutritional advantages and disadvantages. But definitely people consume too much. Plant-based products don’t contain cholesterol or the pathogens that exist in meat.”

They would therefore be attractive to many vegetarians who could gain the nutritional value without a moral dilemma. Poorer nations, where traditional meat is too expensive for most of the population, will also benefit in time.

Redefine Meat will pilot its plant-based meat in restaurants throughout Europe early in 2020, so British diners could have next year’s Christmas lunches printed for them. It has already served hundreds of people in Israel and conducted tastings in Europe. The products will initially be more expensive than traditional meat – the firm is aiming for a price point around £28 per kg, twice the cost of British supermarket sirloin steak – but this will come down over time and should, eventually, be cheaper than traditional meat.

“The question is how to scale up so you can put it in a butcher’s shop in London day in, day out. So our business model is to sell the machines and the ingredients, not the finished meat.”

Worldwide, meat production is booming. According to UN figures, in the early 1960s, around 70 million tonnes of meat was produced. By 2017, that had multiplied to more than 330 million tonnes. Britons eat about 80kg of meat each per year.

The technology for 3D-printed meat is improving rapidly. Last month, another Israeli firm, Aleph Farms, printed meat produced from cow muscle cells on the International Space Station. The company says its meat will be on general sale a few years from now.

Before then, Spanish-based Novameat expects to have its plant-based printers in Spanish and Italian restaurants by the end of 2020, and in British restaurants soon after. Its CEO, Giuseppe Scionti, plans to have the machines in supermarkets in 2021 and in homes a year or two later.

Pea and rice proteins are fed into Novameat’s printers in capsules like those for an espresso machine. They contain a red paste that is turned into realistic steak or chicken. Salmon, lamb and pork capsules will be coming soon. Scionti believes the quality of what comes out – steaks and chicken fillets that mimic the taste and fibrous texture of meat – will be the key to its success.

The British market is a major target. “In Britain, the ‘flexitarian’ [largely vegetarian, but sometimes eating meat] movement is very big – around one third of the population,” he explained. “This way you can support biodiversity and avoid food waste because so much shop food is discarded.”

The technology is being closely watched by the food industry. Emma Lake, news editor of the Caterer, said: “The potential market for 3D-printed meat could be substantial; we’ve already seen dramatic growth in vegan meat imitations in response to more consumers cutting down on their consumption of animal products for environmental and health reasons. The launch of the Greggs vegan sausage roll in January demonstrated the interest in such products.”