The Spring-Summer 2019 Dior Homme show by Kim Jones was held within one of the barracks of the Republican Guard. Click on.dior.com/men-summer19 to find out more about Kim Jones’ debut collection. 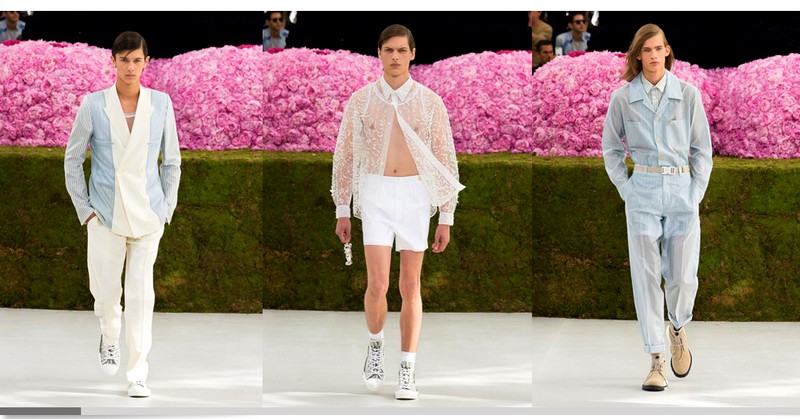 For his first, hotly anticipated Christian Dior collection, Kim Jones went back to the beginning. The British designer mined the Dior archive for inspiration to pay tribute to the man who established the fabled brand in 1946.

“The collection is really based on Mr Dior’s personal life,” Jones told the Observer at a preview in the Rue Marignan atelier. “It is the idea of looking at different parts of his life.”

Jones made his debut in Paris on Saturday afternoon as artistic director for Dior Men, the rechristened Dior Homme, completing the changing of the guard for the spring/summer 2019 season. In a tribute to Dior and to his own heritage, Jones invited Prince Nikolai of Denmark to start the show. “I’m half Danish and Mr Dior always had that thing with royalty, and so I thought it would be nice to open with a prince – quite glamorous isn’t it?”

Jones had only been at the brand for three months, following his departure from Louis Vuitton in January, and admits he didn’t have much time to dig deep. The elements he focused on in this first collection, however, will resonate with aficionados of the fashion house. Toile du jouy patterns from the wallpaper in the first Dior boutique were used on jacquards and leathers; botanical emblems referenced Dior’s love of horticulture; the famous cut used by Dior himself inspired the tailoring and the name of the new jacket, the Tailleur Oblique; and pink and grey, shades synonymous with the brand, were used throughout.

This aesthetic approach lends itself to a softer, more relaxed Dior Men than we are used to seeing. Jones’s predecessor, Kris Van Assche, who has since moved to fellow LVMH-owned brand Berluti, favoured dark palettes and sharp tailoring during his 11-year tenure. Before him, Hedi Slimane was lauded for his skinny suits – Chanel designer Karl Lagerfeld was said to have lost more than 40kg to fit into one of Slimane’s creations.

The show notes said that this was about “translating a quintessentially feminine couture identity into a masculine idiom.” This intention mostly resonated with the striped tailoring that appeared to be similar to the lining of a suit, but had sheer organza overlays.

It is also a progression from the streetwear influences of which Jones was a proponent during his time at Vuitton. He was the man behind its sellout collaboration with Supreme last year. “I’ve moved away from that a bit,” he explained. “[That’s] easy modern menswear; this is a lot more elegant and sophisticated and a little bit romantic too, which is what Dior is.”

There were, however, sportswear influences; footwear featured trainer, shoe and boot hybrids, while baseball pumps and caps completed most looks. In the new Dior Men world order, this is representative of “contemporary masculinity”.

To elevate the collection, Jones featured couture techniques with pieces such as the appliquéd feather and bead-embellished shirts. Trench coats were crafted from embroidered tulle and organza, while hand-sewn florals were layered with screen printed silk. Through transparent vinyl, florals and feathers – representing the ceramics found in Dior’s personal archive – could be seen. “We wanted to have very light touches, so that it has an ease to it and makes it effortless,” explained Jones.

The bags will be a main takeaway from the collection. The brand’s famous Saddle bag has been made for the first time for men, and came in taupe and black backpacks, cross-body and belt-bags. The latter swung as the models walked to the sounds of Underworld’s Born Slippy and Orbital’s Halycon in a soundtrack mixed by the DJ Diplo.

There were plenty of playful accessories that will, no doubt, attract a young audience. Dior’s favourite dog was called Bobby, so Dior Men’s jewellery designer, Yoon Ahn, created rhinestone-embellished dog-bone keyrings, as well as a perfume dispenser in the shape of the dog and its owner. Double rings (for two fingers) are made from precious stones, such as lapis lazuli, onyx and amethyst, while iPhone cases have finger grips spelling out the brand’s name so that “when you take a selfie in the mirror, you can see Dior”.

Jones has also collaborated with New York-based artist Kaws, otherwise known as Brian Donnelly, on reimagining the famous Dior bee, the emblem synonymous with the house. This came embroidered on floral shirts, as well as accessories. Donnelly created a BFF doll (already popular on Instagram) dressed in clothes from the spring/summer 2019 Baby Dior collection. He also created the set for the show, with an imposing 10ft floral BFF version of Mr Dior – made from pink, white and black roses and peonies – holding a white version of the Bobby perfume bottle. Elsewhere, Matthew Williams of 1017 Alyx 9SM made the metal buckles seen on accessories, while milliner Stephen Jones reimagined headwear from the archive also.

Jones is happy to share the limelight with his collaborators and encourages new design talent. The London-born Central Saint Martins graduate has been prominent on the fashion scene since his teens. After setting up his eponymous label shortly after graduating, Jones was headhunted by Dunhill to be its creative director, only to be poached by Louis Vuitton to design its menswear line three years later, a role he held for seven years.

He has previously spoken of insisting on higher wages for his design team at Louis Vuitton when the number of collections they were producing per year increased along with revenues at the house. While Jones was in charge, revenues continued to grow at the brand year on year, while his Supreme collaboration was said by LVMH to have significantly contributed to its overall 23% profit increase in the first quarter of last year.

Only two weeks before his Saturday debut, the 44-year-old was in London supporting friends Edward Crutchley and David Beckham at their London fashion week men’s shows. (Beckham was the first person to wear one of Jones’s Dior creations, at last month’s royal wedding).

There’s a lot of love for Jones. Models Kate Moss and Naomi Campbell, who both walked the lap of honour with Jones as he took his final bow at Vuitton, Victoria Beckham, rapper A$AP Rocky, actor Gwendoline Christie and Kim Kardashian were among friends who arrived early in Paris to congratulate Jones in the Dior atelier as he completed final fittings.

So too, was Virgil Abloh, Jones’s Vuitton successor, who showed his first collection on Thursday. Jones, who was there cheering, told the Observer that Abloh and his mentor, rapper Kanye West, used to sleep on his sofa 12 years ago when they were all trying to make it. “It’s nice to go full circle with friends,” he said.