Reassessing the future of dressmaking in the men’s wardrobe, Maison Margiela presented its first full Artisanal menswear collection. The show signifies an unrestricted foray onto the territory of haute couture for men in a conversation with a new masculinity in motion.

Opening the doors to the deft skills of creative director John Galliano and the 163 rue Saint-Maur ateliers, the presentation was staged as the house works in view. The collection is exclusively bespoke and will be included in a co-ed Spring – Summer 2019 Défilé show in September. 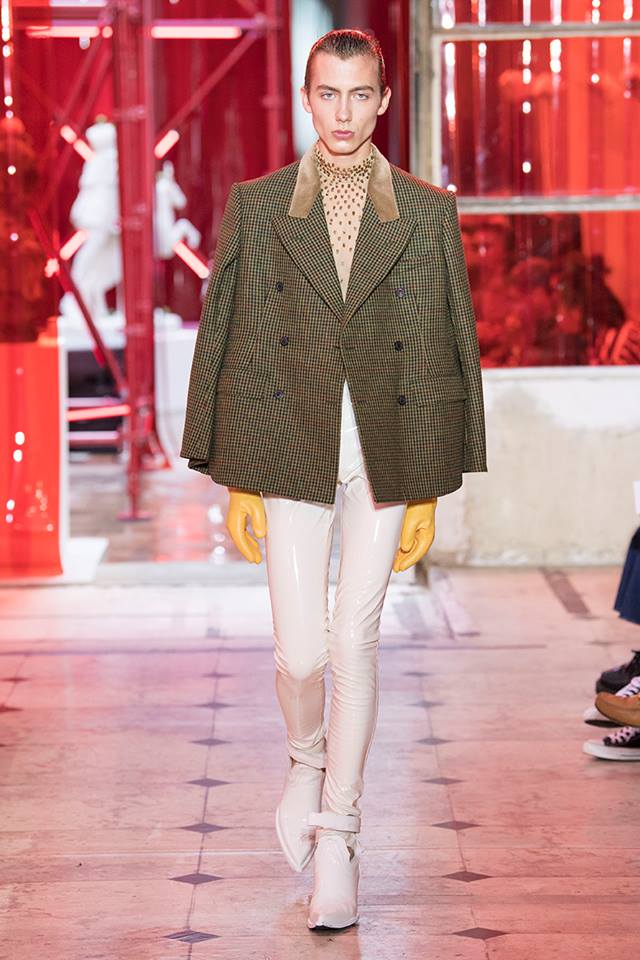 Paris Fashion Week has become a week of firsts. Virgil Abloh at Louis Vuitton yesterday, Kim Jones at Dior Homme tomorrow and, in the middle of them, John Galliano’s first couture menswear show for Maison Margiela.

Galliano doesn’t call it couture – speaking in a new Margiela podcast, released as the show started, he calls it “artisanal”. “We are trying to define what artisanal means for us,” he said. “It’s rooted in craftsmanship and is the highest form of dressmaking, but for men. Its backbone is in tailoring, but we are trying to further explore the bias cut.”

The bias cut has been central to Galliano’s womenswear aesthetic since the mid-1980s and is something he has used in former roles at Givenchy, Christian Dior and his own-name label. It is not, however, often found in menswear. For those who don’t know what a bias cut is, Galliano went on to explain on the podcast. “If you had a napkin at home and you hold it like a square, and you pull the left and right sides simultaneously, that’s what is called straight of grain. Now turn that around to a diamond and pull the opposite corners – when you pull you will see what happens. There’s a natural elasticity in the fabric and that’s when you hit the true bias.”

For this spring/summer 2019 collection, which was staged at Margiela’s atelier in Paris, Galliano gave himself the task of cutting the bias not from his usual silk-backed crepe, like he would for women, but from English tweeds more in line with Savile Row suiting. They came in sculpted blazers, sweeping coats and satin suits.

“It’s a never-ending learning process with the bias, because each fabric reacts differently … a dialogue develops and you have to be attentive because it’s alive,” he said. “It teaches you, you can’t read about it from a book … you are not forcing it to do anything, it tells you what to do.”

Embroidered kimono jackets, long red plastic macs, bejewelled corsets and acidic vinyl trousers were noteworthy pieces from the rest of the collection, as was the cowboy boot, which was present in his collections for autumn/winter 2018 too.

The styling was significant. Jackets were nonchalantly thrown over the models’ shoulders to evoke “that spine-tingling moment of an early morning shrug after an after-party, where you don’t actually put the sleeves through your coat, you just put the coat on your shoulders”, said Galliano. Shoulder pads – which were used to give illusions of a cape and, in turn, heroism – evoked a confidence inspired by Humphrey Bogart. “You imagine those early pictures of [him] with the cigarette and with the coat on the shoulders … it’s an attitude, and I have tried to express that through a coat so that we can all have that attitude.”

Galliano also revealed on that podcast that he works with his year-long student placements to put the looks together. “Their view of the world is completely different,” he said. “Of course, one understands it, but you can’t put yourself in those shoes, can you? You can only be alive around these people. As much as they are obsessed with what I do, I am obsessed with what they are thinking, so it’s an ongoing exchange.”

Galliano intended to address gender stereotypes with this collection, to show that cutting skills could help “discover a new sensuality, a new sexuality”. He also revealed that he intended to show his womenswear and menswear collections together as of October. The 34 looks shown today were versions of ready-to-wear pieces that will be shown in three months’ time.

Following his sacking from Dior in 2011 following an alleged antisemitic rant, there has been a lot of focus on Galliano’srehabilitation. Since his appointment at Margiela he has been welcomed back into the industry by many. His recent work for the brand has been well received too; in his first year in the job, revenues increased by 30%.

Combining womenswear and menswear, Galliano explaining himself on the podcast and opening the doors to the brand’s atelier (so attendees could see the in-house designers working away as they entered), it all signalled an evolution for the notoriously anonymous brand and very private designer; its deconstructed aesthetic code now infiltrates its processes too.