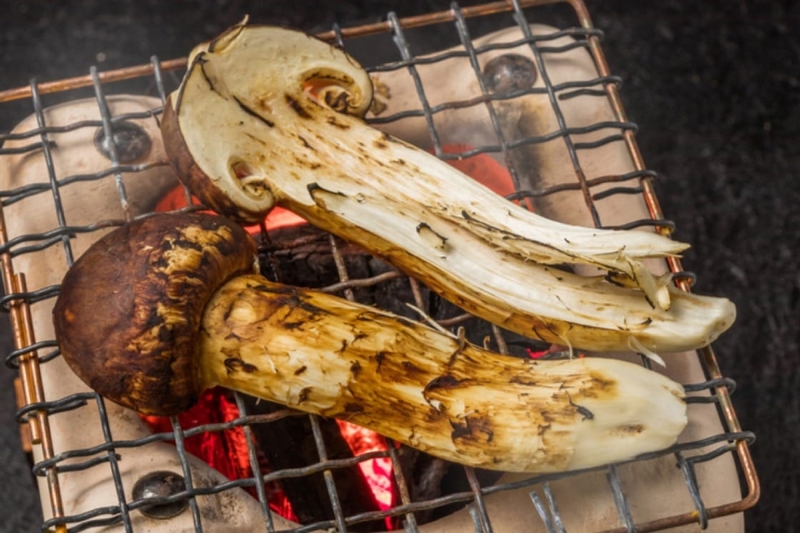 This article titled “Japan’s beloved matsutake mushroom under threat” was written by Justin McCurry in Tokyo, for The Guardian on Saturday 19th September 2020 06.00 UTC

In a country that prides itself on its seasonal cuisine, few ingredients generate as much anticipation in Japan as the delicate, unmistakably autumnal flavours of the matsutake mushroom.

As the humidity of summer gives way to cooler days, it will soon appear on special display in supermarkets; upmarket ryotei restaurants will present delicate slivers in clear soups, or steamed with gently seasoned rice.

For Japanese diners with money to spare, the matsutake is the taste of autumn, prized for its meaty texture and a sweet aroma that combines mushroom with a hint of cypress.

But its status as the king of mushrooms is in doubt. This summer, the International Union for Conservation of Nature [IUCN] placed the fungus on its red list of threatened species for the first time, identifying it as “vulnerable”.

Japanese consumers have been blamed for helping consign the Pacific bluefin to red list status in 2014, but experts say overconsumption is not responsible for the matsutake shortage.

Instead, they cite a steep decline in its natural habitat of red pine forests, and the rising menace presented by the pinewood nematode, an invasive worm originally from North America.

While deforestation is threatening matsutake populations in other parts of the world, changes in the way people interact with pine forests in Japan appear to have sealed the mushroom’s fate.

The postwar exodus to urban areas meant man-made pine forests where matsutake had previously thrived were left abandoned, according to Akiyoshi Yamada, an associate professor at the Institute for Mountain Science at Shinshu University.

With no one left to clear the forest floor of “litter” such as pine needles, leaves and branches, the bare ground where matsutake grow, drawing sustenance from the roots of red pine trees, were invaded by rival plant species, he said.

By the 1970s, disease caused by the pinewood nematode “exploded in western Japan, where the climate is relatively warm, and gradually spread to eastern and northern regions,” Yamada said, adding that climate change could be a factor in the pest’s multiplying numbers.

The idea that Japanese matsutake, which are next to impossible to grow artificially, could become a culinary luxury in memory only horrifies devotees of the county’s cuisine.

Residents of the ancient capitals of Kyoto and Nara have been eating matsutake for more than a millennium, and the mushroom is mentioned in Manyoshu, a seventh-century collection of Japanese poetry. From around that time, aristocrats, including members of the imperial family, offered gifts of matsutake as an autumn treat, Yamada said. “The matsutake is a connection to modern-day Japan. It’s a special part of our food culture.”

The IUCN is not, though, encouraging people in Japan to eat fewer matsutake.

“We are trying to raise awareness about the status of the species so that appropriate conservation actions can be taken to ensure that it can continue to be sustainably harvested for human consumption,” said Craig Hilton-Taylor, head of IUCN’s red list unit.

“In Japan, control of pinewood nematodes and site control, for example the thinning and removal of excess litter on the forest floor, are actions that may conserve this fungus.”

The price of matsutake depends on the size of the annual crop, but they are rarely, if ever, considered cheap. As the season’s October peak approached, one 400g set of domestically grown matsutake was selling for almost 30,000 yen online, with a slightly smaller quantity of prime specimens from north-eastern Iwate prefecture advertised for almost 100,000 yen.

While Japan now buys large quantities of the delicacy from China, South Korea and Canada, aficionados prefer the domestically grown variety, complaining that imported mushrooms lose their distinct flavour and scent during the journey to Japan.

“It’s about the terroir of the land. Just as pinot noir tastes vastly different when grown in Burgundy than in California, even though it is the same grape, the same goes for matsutake,” said Yukari Sakamoto, a Tokyo-based chef and food writer.

“Japanese cuisine is rich with seasonal ingredients and matsutake mushrooms signify the arrival of autumn,” she added. “It has a delicate flavour and is rich in natural umami. Matsutake are a class above other mushrooms.”

Domestic production of matsutake plummeted to just 14 tonnes last year, by far the lowest since the government started keeping records in 1960. Even when imported varieties are included, Japan consumes just 1,000 tonnes of matsutake a year, according to the forestry agency. By contrast, it gets through as many as 120,000 tonnes of shiitake mushrooms a year.

But Hilton-Taylor said fears that matsutake could disappear were premature. A combination of measures to deal with the pinewood nematode and improvements in forest management, such as the removal of excess litter, could make matsutake conservation viable in the long-term, he said.

And he held out hope that it may one day be possible to cultivate a matsutake acceptable to discerning Japanese palates.