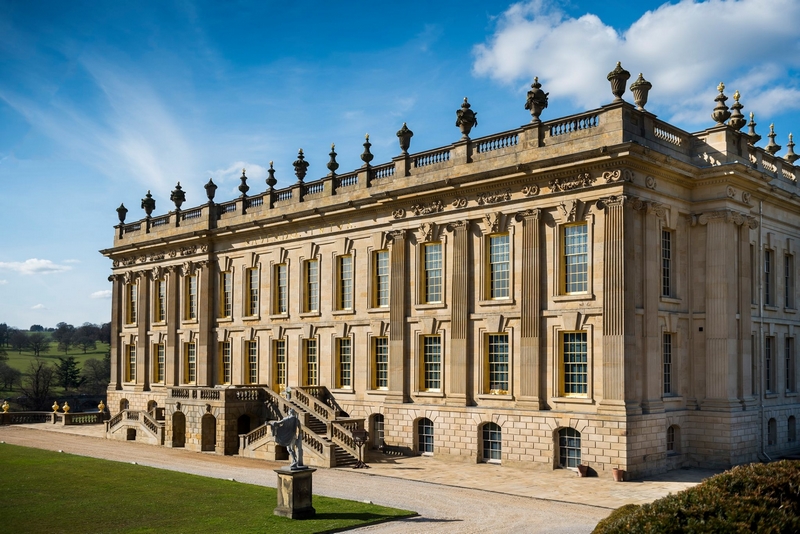 With many of the UK’s finest stately homes and country houses still closed to visitors, or with limited capacity for shorter, small group tours only, it makes sense to try to get more out of a visit, adding extra elements to turn a trip into a lovely long day out, be that with a hike or cycle ride, or picnic in the grounds.

At an increasing number of historic estates, you can even throw an outdoor swim into the mix, and practise your most regal doggy paddle while looking up at a grand ancient seat or crumbling castle.

Here’s a selection of spots for making the most of the late summer sunshine.

This summer’s heatwave turned the usually formal surrounds of Derbyshire’s grand Chatsworth House into an almost tropical setting, with people leaping from trees and rope swings into the River Derwent, or wading from shallow beaches to admire the splendour of one of England’s most magnificent houses from the water. On the deeper side of the river are the sloped lawns of the estate; on the other, open parkland where deer and sheep trot down between oak trees to the water’s edge.

“I swam a few hundred metres up and downstream as dippers flew past my head to catch insects, and found it fun to think of the uptight grandeur of the enormous house while feeling completely free, floating along the river,” said Kate North, 40, from Wiltshire, in the area recently on a family holiday.

By just booking ahead for car-parking (£4) it’s possible to access this glorious stretch of the Derwent without stumping up the entry fee to the house (adult £23, child £12.50 for house and garden), but that would be to miss the 25 baroque rooms, finely painted and gilded, and astonishing art collection.

The Tudors weren’t known for their love of bathing, so joining one of the new open-water swimming sessions in the 38-acre lake at Hever Castle – childhood home of Anne Boleyn – isn’t exactly an authentic pursuit. Indeed, the lake wasn’t built until 1904, by William Waldorf Astor. It is now a luscious place to dip, with two courses, 400 and 750 metres, set up for competent swimmers, spanning the peaceful, tree-fringed expanse. It’s shallow enough to stand up in most places, with a muddy bottom. Open-water swim sessions are held from 6.30pm-9pm on Tuesday and Thursday evenings, and from 8am-9.30am on Sundays.

As with the swimming, you must book ahead to visit Hever Castle’s grounds and play areas; you can then upgrade to a castle entry ticket on arrival, if there’s capacity. Following the Lake Walk offers encounters with kingfishers, herons and crested grebes, and next weekend is the final one of the summer for hiring rowing boats. It also sees the return of the annual Castle Triathlon, with the swimming leg in the lake.

If you fancy getting wet again later on, the nearby River Medway provides swimming spots such as Ensfield Bridge.
• Swim: hevercastleswimming.co.uk, £10pp, must be aged eight or over and those aged 8-16 must be accompanied by an adult. Castle: hevercastle.co.uk, garden entry £15.55 adult, £3.25 castle upgrade, children (5–17 £9.75), upgrade 95p, grounds open 10.30am

While it’s the outdoor pool at Cliveden House that is its most infamous place to swim – it’s where Christine Keeler first encountered John Profumo – a more sublime submersion can be made in the stretch of the Thames that meanders just below the terraces of the formal gardens. Even better, given that rooms at the luxury hotel cost upwards of £445 a night, it’s cheaper and easier to take a dunk here, especially if you book ahead to explore the gardens of the side of the property open to the public through the National Trust (adult £10, child £5), which leases a section to the hotel. Internal tours of the glamorous ground floor are also available. Steep cliffs leading down to the shore from the house are thick with towering trees, and miles of garden paths lead through the estate to the riverbanks, where you can float down a heavenly, leafy sweep described as the “sweetest stretch of all the river” by Jerome K Jerome in Three Men in a Boat. Until October, there’s a new fleet of boats for hire, from self-drive electric launches to Canadian canoes.

The grand Georgian mansion at the heart of Beckenham Place Mansion in south-east London was built in 1760 for a wealthy timber merchant and politician, John Cator, but was transformed in 2017 into a community centre-cum-arts venue, operated by Copeland, the people behind Peckham’s Bussey Building. It combines artists’ studios, bar and cafe, and hosts everything from a Sunday food market (10am-2pm weekly), yoga and craft classes to occasional vintage fairs. Best of all, there’s a spectacular purpose-built Georgian swimming lake, launched last year after a major restoration project, at the edge of the vast (for London) forested parkland. You can swim from 7am-6.30pm Monday, Weds and Fri, Sunday 7am-5pm – sessions must be booked in advance (adult £5.50, child £3.50). Swimmers must be over eight years old. This summer, swimmers were advised to take bottled water to rinse off with afterwards, as a parasite that causes “swimmers’ itch” had been found in the water, though this affected only a few people and usually dies off after summer.

Only the gardens and loos are currently open at Castle Drogo, an impressive if somewhat austere folly designed and built by Sir Edwin Lutyens. It lies very close to the River Teign – a conservation project to make it watertight is under way and is part of the reason why the castle is closed this year – and miles of paths through the Teign Gorge offer the prospect of a walk, a run and a wild river swim. Book ahead (£5 adult, £2.50 child) to visit the Lutyens-designed terraced gardens, carved from granite, where Persian ironwood trees are splendid in autumn, then explore the fern-fringed forest trails, taking a dip below the castle in the long, dark Salmon Leaps pool.

Hardier swimmers who are acclimatised to chillier waters can discover dozens of dramatic wild swim spots beneath impressive Scottish castles and ruins.

At Loch Ness, in the Highlands, there are secluded entry points opposite Urquhart Castle, recommended by wildswimming.co.uk, while local swimming groups meet at Dores beach, at the Inverness end of the lake, or you can scramble down to the edge from the castle grounds. Book ahead (historicenvironment.scot, adult £9.60, child £5.80) for entry to the grounds and one of Scotland’s largest castles, a medieval fortress on a rocky promontory with prison cells, a banquet hall and towers to explore.

Other dramatic dips in lochs beneath imposing castles include the west coast’s Castle Stalker (tours currently on hold), north of Oban, on Loch Linnhe, and ruined Castle Tioram at Loch Moidart, on the Ardnamurchan peninsula

The blogger aevbswims.wordpress.com often reports on days out combining castles and wild swims, particularly in Scotland, and has good ideas for “stately swims”.

Though sadly the misty ornamental lake isn’t regularly open to swimmers, the vast baroque estate of Castle Howard (gardens ticket £12.95 adult, £8.50 child; house and garden £22/£12), near York, allows access for an annual triathlon event. The Castle Triathlon Series (next held here in July 2021) involves a swim in the Great Lake, followed by a cycle ride into the Howardian Hills, and a run through the 9,000 acre estate. The series usually sees other swim, run and triathlon events held at other UK stately homes, including Hever Castle in Kent, Cholmondeley Castle in Cheshire and Lough Cutra in Northern Ireland.