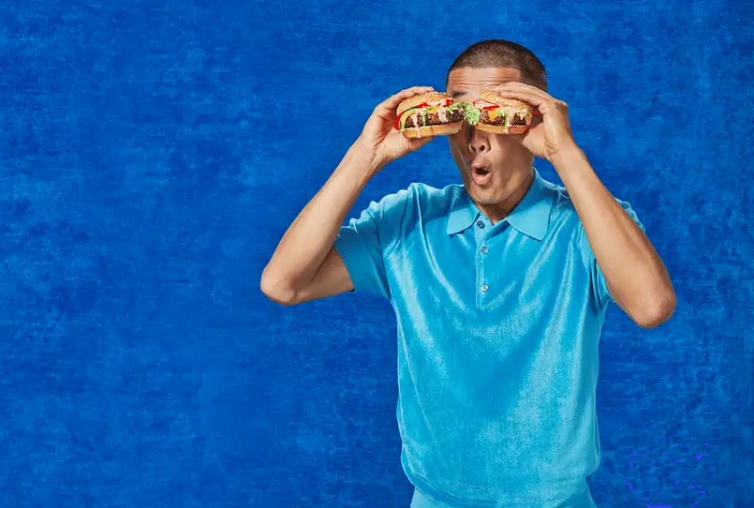 This article titled “Food in 2050: bacon grown on blades of grass and bioreactor chicken nuggets” was written by Sirin Kale, for The Guardian on Wednesday 1st January 2020 06.00 UTC

In 2004, the Guardian correctly predicted that the developed world’s overreliance on meat would be one of the most pressing issues for the survival of our species. “Britons need to say goodbye to burgers and meat,” we wrote, “because the overemphasis on meat in the western diet is one of the things that stifles sustainable food production.”

Thankfully, the past decade and a half has seen an unprecedented interest in meat-free diets. In 2004, veganism was seen as a fussy, faddish lifestyle choice. Now, buoyed by blockbuster documentaries such as Cowspiracy and What the Health, and celebrities such as Ellie Goulding and Ariana Grande, it has never been so popular. According to the Vegan Society, 600,000 Britons are vegan. In 2006, this figure was just 150,000.

Demand for vegan food is at unprecedented levels: in 2018, the UK launched more vegan products than any other nation; in 2019, 250,000 people signed up for the Veganuary challenge, pledging to avoid all meat and dairy for the month of January. For those not willing to make the jump to full veganism, one in three Britons had at least reduced their meat consumption in 2018.

But there is still a long way to go. The west’s overconsumption of meat and dairy continues to fuel global warming. Livestock is responsible for approximately 14.5% of greenhouse gas emissions; 70% of global deforestation takes place in order to grow animal feed. In 2019, the EAT-Lancet Commission on Food, Planet and Health determined that substantial dietary shifts must take place by 2050. “Global consumption of fruits, vegetables, nuts and legumes will have to double, and consumption of foods such as red meat and sugar will have to be reduced by more than 50%,” the panel of experts judged.

By 2050, meat-eating could seem like a throwback, according to some experts. “Our current method of growing crops to feed to animals so we can eat animals is shockingly inefficient,” says Bruce Friedrich of the Good Food Institute, which works to develop alternatives to meat. “By 2050, [almost] all meat will be plant-based, or cultivated.”

Plant-based “meat” is already here. The Beyond Burger and the Impossible Burger are widely available, but Friedrich predicts a widening of the products on offer to consumers. “We’ll have plant-based meat that doesn’t exist yet, whether it’s pork chops, steaks, tuna or salmon.” Anna Taylor, the executive director of the Food Foundation, thinks that plant-based substitutes will find their way into processed foods, without consumers being any the wiser. “Plant-based alternatives to animal protein will appear automatically in foods we eat, without consumers having to change their habits.”

The real challenge will be persuading consumers to embrace cultivated meat. Also known as lab-grown meat, this is developed from animal or fish cells in the nutrient bath of a “bioreactor”. It is not yet on the market, but at least 40 private companies are working on cultivated-meat alternatives. In the UK, scientists at the University of Bath are growing bacon on blades of grass. The California startup JUST has created chicken nuggets in a bioreactor.

Friedrich is optimistic that we will all be eating cultivated meat by 2050. “There won’t be factory farms or abattoirs in 2050,” he predicts. “People will look back at the idea of growing live animals for meat in the same way that we look back at horse-drawn carriages for getting from London to Brussels.” But we won’t entirely stop eating meat from animals reared for slaughter. “There will be some heritage breed farms and slaughterhouses where the animals are treated well,” Friedrich concedes. But it will be a limited market.

If this all sounds like science fiction, strap yourselves in for the predictions of the food designer and futurist Chloé Rutzerveld. “We’ll skip all of our current existing foods and switch towards a whole new eating system where we build food with microorganisms,” she says. “Instead of growing crops or raising animals, we’ll use microorganisms such as fungi, bacteria, yeast and microalgae to directly produce the carbs, proteins and fats we need.” This food will again be produced in bioreactors, before being filtered and dried into powders.

But we won’t be consigned to a joyless diet of flavourless dust. Rutzerveld claims that 3D-printing technology will be able to replicate the textures and flavours of regular food. “We can make a library of mouth feels and texture at a nanoscale,” she says, “in order to recreate sensations like freshness or juiciness.” Eating microorganisms grown in bioreactors will be transformative. “We’ll be able to make the food-production system so much more efficient, saving the land and water and energy resources.”

Not everyone agrees. “Lab-grown meats are a red herring,” says Prof Pete Smith of the University of Aberdeen. “We don’t need them. We can get most of the protein we need from plant-based foods.” He is also doubtful that we will move to other protein sources such as insects. “Wealthy countries are already massively overconsuming protein,” he says. “We don’t need to move to alternate protein sources – if we cut in half the amount of protein we are already eating, we would be at healthier levels.”

But even if we are not eating insects directly, they can still be of use in our wider food chain. “Insects could be really important for feeding animals,” says Taylor. “One of the problems we have is that ruminant animals (including cattle, sheep and goats) are often fed on soya, which is grown in deforested parts of the planet. If we could shift to other ways of feeding animals, such as insects, we can reduce deforestation.”

Consumers will continue to turn to plant-based alternatives to dairy. Plant-based milks are already big business, and egg substitutes will be next: JUST and Zero Egg have already developed egg substitutes, and we can expect other brands to emerge.

By 2050, climate change will dramatically affect what we can eat and drink. Speciality crops such as avocados, coffee and wine grapes – which can only be grown in a very narrow climate range – will be at risk. “A one- or two-degree change in climate could mean make-or-break for some regions growing speciality crops,” says Prof Gregory V Jones, an expert in wine growing at Linfield College’s department of environmental studies. “Wine-growing regions such as Greece, southern Italy, southern Spain and Portugal will all potentially experience issues,” he continues. In turn, though, wine-growing will become possible in places such as Scandinavia and the north of England. “They aren’t world-class producing regions now, but by 2050, if climate change continues, they could be.”

If real progress isn’t made to halt global heating, food production in the global south will be imperilled. “Things aren’t looking good for the developing world,” says Smith. “China has a big problem with water – overextraction means that the soil is becoming too salty. India also has a problem with unsustainable groundwater use.” Rice-growing in China and wheat-growing in the northern plains of India could be affected. All of this augurs badly, given that China and India’s population is forecast to rise to a combined 3.2 billion by 2050. “Water stress will become more acute,” Smith warns. “The more the climate warms, the more droughts we will have. This will take place in areas that are already struggling to feed themselves.”

In the UK, much imported produce may become prohibitively expensive. “We are very reliant on countries that are vulnerable to climate change and water scarcity,” says Taylor. The grapes and berries we now import from Morocco, Spain, India and South Africa will become scarce. We will have to return to more seasonal patterns of eating – bananas, for example, will no longer be a cheap household staple.

Widening inequality will play out on dinner tables across the world. “I’m worried about uneven dietary development,” says Prof Corinna Hawkes of the Centre for Food Policy at City, University of London. “The diets of rich people will get better, and those of poorer people will get worse, and we’ll end up with appalling inequalities in what we’re eating.” She predicts that wealthy people will continue to reduce their meat and processed-food intake, and embrace indigenous food such as sorghum and amaranth. “These foods were once eaten by poor people, but will become resurgent in higher-income groups, as they become more interested in novel foods.”

As fast-food companies continue to make inroads into developing nations, junk-food consumption will rise in historically impoverished communities. “These people have inadequate diets already,” says Hawkes, “and they will be adding junk food into their diet, which only contributes to the problem of obesity.”

Rich people’s diets will get better, and poorer people’s will get worse – we’ll have appalling inequalities

Rising obesity rates are a real cause for concern; half of Britain’s population is predicted to be obese before 2050. Globally, 60% of men and 50% of women will be obese by 2050, if current trends continue. “We need to put into place policies that level the playing field and reduce the abilities of the companies selling junk food to make it so affordable and accessible,” says Hawkes. “Junk food needs to be taken out of the spotlight and nutritious food put centre-stage.”

So, what should we be eating in 2050? It’s fairly simple – what we should be eating now. (And what the Guardian predicted in 2004.) “We need to be eating more fruit and vegetables, wholegrains, less junk food, and less meat and dairy,” advises Taylor. “If we do these four things, we stand a chance of reversing some of the diet-related diseases that are currently crippling the NHS, and also bringing down the carbon and biodiversity impacts of our diet.” But whether we’ll be able to resist the siren pull of processed food and cheap meat remains to be seen.

Other protein sources (to include legumes or nuts): 125g a day, 575 calories