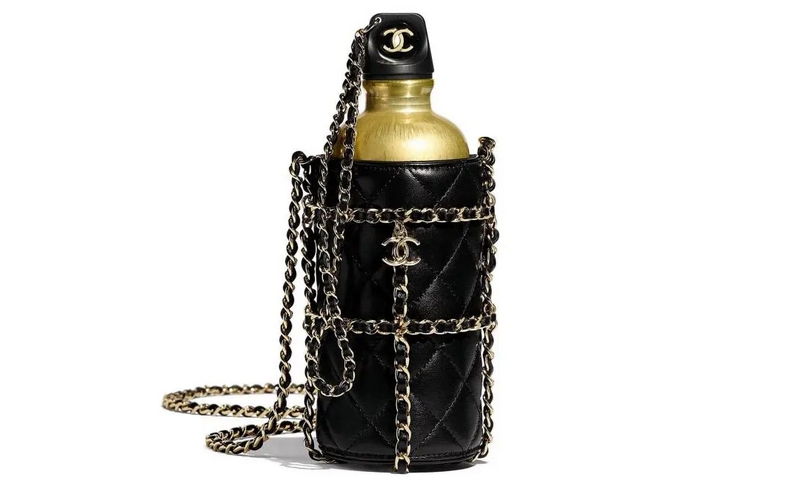 Age: Introduced in November, but only just arrived in UK stores.

Appearance: Golden, nestled in a quilted lambskin sleeve with a long gold chain to go over the shoulder and the Chanel logo worked into the cap.

Are you serious? What kind of idiot pays that kind of money for a water bottle? The plentiful kind: Britain’s Chanel boutiques have already nearly sold out of them.

Where does the water come from, Mars? It doesn’t come with water – you have to fill it up yourself.

From the tap, you mean? That’s the idea – it’s a reusable bottle, not a disposable one. It is environmentally friendly.

So the price is a deterrent, like charging 5p for a shopping bag. Exactly. It’s a water bottle for life.

At £4,410? I should live so long. Staying hydrated will help with that.

I just can’t imagine that anyone who feels entitled enough to own a Chanel water bottle would stoop to drinking the regular tap water. Once you own it, you can put champagne in it if you want.

It makes a pricier version? Twenty-five years ago, Karl Lagerfeld designed a leather water-bottle holder with a gold chain for Chanel’s 1994 collection. It was much admired at the time, and vintage examples now go for more than £7K on certain websites – but do shop around.

Seven large for a manky old water bottle from the 90s? No, that is just for the holder. You would have to supply your own water bottle.

Well, I guess I’ve heard everything. Not quite. The actual most expensive water bottle ever, the 24-carat-gold-covered Acqua di Cristallo Tributo a Modigliani, went for £45,000. The water itself – a blend sourced from France, Fiji and Iceland, lightly adulterated with gold dust – was included in the price.

Huh. I should buy two in case I lose one. Only one was ever sold, at auction in 2010, ironically to raise funds to combat the climate crisis. The same bottle designer has also produced a £3.4m platinum version, but there is no evidence anyone has actually paid for it yet.

That Chanel water bottle is starting to sound like a bit of a bargain. I knew you’d come round.

Do say: “Are you crazy? That’s the amount I spend on fags, takeaways and betting machines in a month!”

Don’t say: “If you really cared about the planet, you’d stop drinking water.”