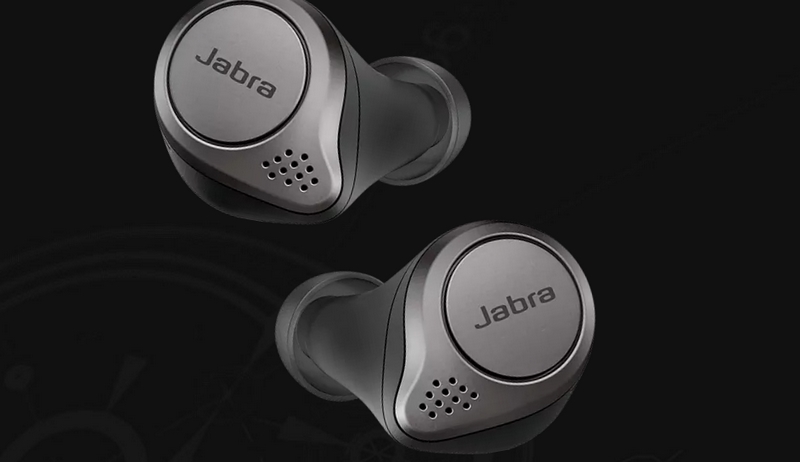 The Jabra Elite 75t wireless earbuds are the follow-ups to some of the best Bluetooth earbuds of 2018, but now smaller, lighter and longer-lasting.

A lot has changed in the world of true wireless earbuds since 2018. Competition is fierce with many good options, but few still manage the perfect combination of comfort, connectivity, case and sound.

The new £170 Elite 75t promise to pick up where their Elite 65t predecessors left off: a cross-platform basic AirPod beater.

The Elite 75t correct one of the biggest problems with previous Jabra earbuds simply by being 20% smaller. The 5.5g earbuds fit much more comfortably, with a shape that slots into the concha and manages to avoid pressing on any of the soft bits of the ear. They are still not quite as small and form-fitting as Samsung’s Galaxy Buds, but they are as comfortable over extended periods. I never once thought they would fall out.

The case, too, is small and compact, magnetically locking the earbuds in place and fitting into the money pocket of a set of jeans. Given it’s easy to lose an earbud, having a pocketable case you can carry around with you to immediately store them away safely is essential.

The case is made of a hard, smooth plastic that’s fairly easy to mark. But it’s only 35g and is charged via the newer USB-C standard, which is a bonus. It takes two hours 20 minutes to fully charge the case via a regular computer USB-port, or faster using a more powerful USB charger.

The earbuds might be smaller than their predecessors, but they last longer per charge: just over 7.5 hours of continuous playback during my testing. The case will charge them more than 2.5 times too, making up to 28 hours of battery life all-in, which is longer than most similarly-sized competitors. A 15-minute quick-charge in the case will also give the earbuds enough battery power for about an hour of playback.

Neither the battery in the case nor the earbuds is replaceable, which ultimately means they are disposable, but they should last several years of daily use at least.

Jabra was one of the first tech companies to solve the issue of a stable Bluetooth connection for true wireless earbuds. The Elite 75t are no different, with a rock-solid, skip-free connection with a large range of devices. They support Bluetooth 5, will pair with up to eight devices and connect to two simultaneously. But unlike other earbuds such as Apple’s AirPods and Samsung’s Galaxy Buds, only the right earbud can be used separately as it alone connects to the phone sending the audio across your head to the left earbud. Jabra said an update allowing this and customised hearing profiles is due in the second quarter of 2020.

Bluetooth audio format support is also limited to the standard SBC and AAC, which is perfectly fine for Apple devices that only support AAC at best, but a lack of the higher-quality aptX or similar formats is disappointing for Windows and Android users.

The Elite 75t only suffer from a few minor lipsync issues, where the audio lags behind video, when watching things like YouTube in a browser on a PC and with games on a phone – something most Bluetooth earbuds still suffer from. Other video apps on both Android and iOS were fine.

Call quality was good with recipients describing my voice as clear with a little bit of echo, although the earbuds allowed significant amounts of background noise into the call. The Elite 75t also have the option of sidetone, allowing you to hear your own voice and gauge how loud you are speaking.

Each earbud has one button. Press the right button once to pause/play or twice for Siri, Alexa or Google Assistant. Press the left button once to activate hear-through allowing you to hear the outside world (and optionally mutes the music), twice to skip forward and thrice to skip backwards. Pressing and holding turns down the volume on the left and up on the right. Taking one earbud out pauses the music and plays again when reinserted within 60 seconds.

All the controls work well and the buttons themselves are some of the best I’ve used on an earbud: good click feeling while being soft enough to press without driving the earbud further into your ear, but firm enough that they are not activated accidentally by putting on a woolly hat.

The hear-through ambient listening mode is fairly natural-sounding, allowing you to have conversations if you so wish, but I found it most useful for a bit of awareness when crossing roads or listening out for announcements. It does not activate automatically on pause, which is a shame.

The Elite 75t are some of the better-sounding earbuds available but don’t quite live up to the sonic highs of Sony’s WF-1000M3, unless you love bass. By default they have real, thumping, almost overpowering bass, which will please those looking for deep bass lines. It was a bit much for me, drowning out the midrange and highs, but thankfully the earbuds come with a really good equaliser. After reducing the bass a little, they sounded good, with a pleasing, well-rounded and warm tone.

The earbuds don’t offer noise cancelling, but are relatively effective at passively isolating you from the world with a solid selection of traditional silicone tips and standard attachment that will take third-party tips, which is good as one of the supplied ones split when removing it from the earbud.

They will also be available in an “Active” version with increased water resistance to IP57 for £189.99 at the end of February.

They sound good, particularly if you love your bass – those looking for more balanced sound will need to dive into the equaliser or look elsewhere. The buttons for controls, including volume, are also first-rate, while connectivity was solid, as was call quality. You can only use the right earbud independently at the moment, and they only support AAC as their highest audio format – not aptX or higher quality codecs available on Android and Windows.

But there are two things that hold them back against the competition. They only offer passive noise isolation, not active noise cancelling, which is quickly becoming the benchmark, and at £170 they are undercut by a large range of equally good and significantly cheaper competitors.

If you want a solid set of true wireless earbuds that work just as well with Android and Windows as they do with an iPhone, iPad or Mac, then the Elite 75t are worth considering, particularly on a deal.

Cons: left cannot be used on its own, no aptX, no replaceable batteries, no wireless charging, no active noise cancellation, bit expensive compared to similar competition