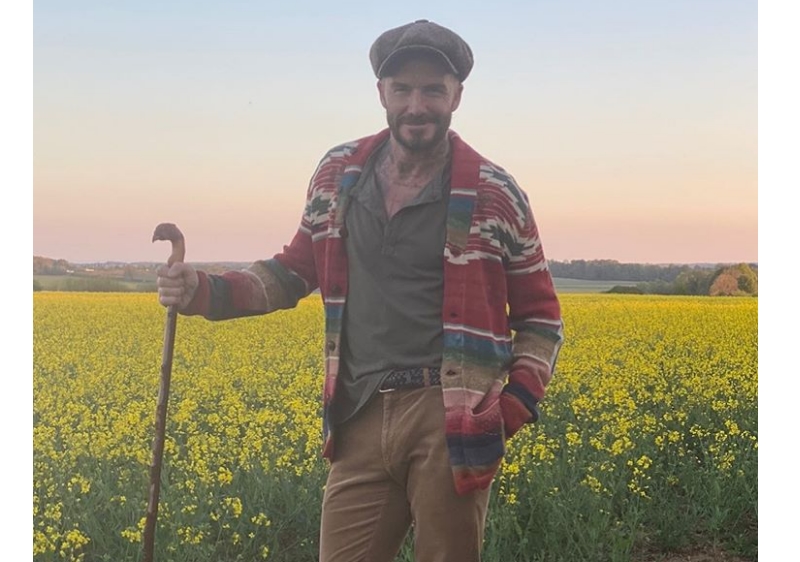 This article titled “David Beckham leads the way as men flock to ‘cottagecore’ look” was written by Priya Elan, for The Guardian on Friday 3rd July 2020 12.10 UTC

He took sarongs, bleach-blond locks and all leather outfits into the mainstream, but can David Beckham do the same to the latest trend for whimsical outdoor living: “cottagecore”?

During lockdown, Beckham’s Instagram account has featured him in some distinct poses. With a scythe in hand against a bucolic sky with a field in the background, he’s usually wearing a flat cap, corduroys and a woolly cardigan or jumper. Sometimes he’s wading through fields in his Hunter wellies and trenchcoat and he’s even filmed himself building a beehive in a V-neck smock top. At another time Beckham channelling what could be mistaken for Tory chic from his Cotswold’s home may have sounded an uneasy note, but right now it strikes a chord with the fantasy of agrarian life that is part of cottagecore.

“As we emerge from lockdown, men are embracing cottagecore as a means to convey a more romanticised ideal of masculinity,” says Andrew Groves, a professor of fashion design at the University of Westminster. Here, he says, Beckham has idealised the agricultural worker and reimagined himself “as the gamekeeper from Lady Chatterley’s Lover”.

The trend, which began in 2017 on social media sites like Tumblr and TikTok, combines lifestyle with fashion. It is about a yearning for the romantic sheen of rural life expressed in part through the look of the 1970s (lace trimmings and denim) – Laura Ashley reimagined by newer labels like the Vampire’s Wife and Batsheva .

During lockdown it has increased in popularity. “For those who felt trapped in their apartments in the grimy, crowded city, it made sense to start daydreaming about pastoral settings, where one could be cosy and feel free from disease,” says fashion historian Andrew Luecke. Cottagecore activities like baking, gardening and making your own clothes have all boomed during the pandemic.

Now, menswear is taking note. Searches for the staples that make up so-called “granddad style” have increased: flat caps (monthly searches are at 27,100 according to Digitaloft.co.uk), cardigans (40,500) and smocks (74,000).

Harry Styles’ multi-coloured chunky patchwork cardigan by JW Anderson has become a cottagecore challenge, with users on TikTok attempting to knit their own versions, resulting in the hashtag #harrystylescardigan. Styles has also been seen wearing a yellow daisy shirt from New York label Bode, a sustainable designer whose autumn/winter collection was the first cottagecore line. It had a strong animal/ agriculture theme, set in a community garden and featuring gardening gloves, animal prints (cow, sheep) with a heavy focus on embroidery and crocheted items.

Similarly designers like Virgil Abloh used his spring/summer 2020 menswear collection to focus on the idyllic outdoors with patterns featuring anemones and pansies and gardening boots.

Cottagecore for men could be seen as a natural branch of both the utility-led “gorpcore” trend (outdoor clothes for people who don’t go out) and the acid ramblers scene. “Those original 90s ravers are now to be found on the moors, both rambling and raving,” says Groves, “wearing a mixture of cords, knitwear and country smocks.” In that sense, he believes cottagecore is a trend that “is only going to become more prominent over the coming years.”