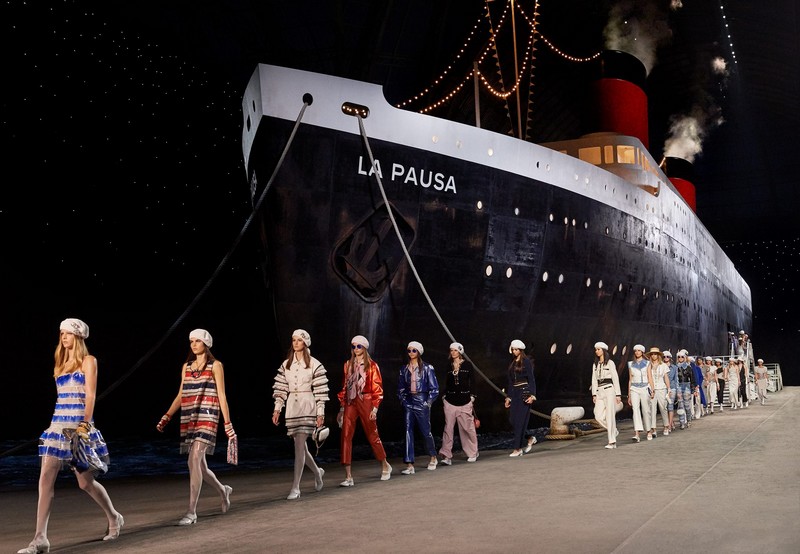 The Francophile mood is the most striking trend to emerge from the season of cruise shows, which Chanel kicked off in Paris; Chanel La Pausa Cruise Show May 2018; photo: chanel.com/ www.facebook.com/chanel/

This article titled “Cruise control: Chanel pushes the boat out with ambitious show” was written by Jess Cartner-Morley in Paris, for theguardian.com on Friday 4th May 2018 09.42 UTC

Docking a 148-metre-long ship with on-board piano bar, swimming pool and a passenger list of Hollywood stars in the centre of Paris is a bold statement of ambition, luxury and elegance. It is indicative of Karl Lagerfeld’s world view that the setting for his latest Chanel catwalk show was, in fact, plan B.

“We wanted to set sail, to take you on an actual cruise,” shrugged Bruno Pavlovsky, Chanel’s president of fashion, before the show on Thursday night. “We worked on a plan for two years, but to find the perfect boat proved impossible.”

The replica boat, named La Pausa after Chanel’s villa in the Cote d’Azur, took a month to install inside the Grand Palais, detailed down to the sound of creaking ropes and distant seagulls, and was the backdrop for clothes that revived the Chanel of a Breton stripe-wearing Coco on holiday. Cream ribbed sweaters had anchor-stamped gold buttons and wide white trousers were worn with deck-friendly flat shoes.

Evening dresses were bugle beaded, while the house tweed suit turned up with a skater-shaped skirt and cropped jacket. City black was swapped for sea blues and candy stripes. The mood was Coco at Deauville, with a dash of Duran Duran’s Rio. After a show featuring 80 outfits, all 900 guests were invited onto the upper and observation decks for champagne, Negroni cocktails, seafood and truffle chips.

The French venue and mood – previous Chanel cruise collection shows have taken place in Dubai and Havana – reflected a new closeness between the French fashion industry and government. Emmanuel Macron’s drive to promote Paris as an international capital of savoir-faire and dynamic business recently saw French designers honoured at a gala dinner at the Élysée Palace, while Melania Trump’s haute couture Chanel gown at last month’s state dinner was interpreted as one of the signs the French president’s trip to Washington had been a success for France.

“Macron is engaged, he understands what luxury is about, he understands savoir-faire and a creative business model. Of course that makes a difference to us,” said Pavlovsky. “But we were investing in Paris before Macron was here,” he added, referring to Chanel’s trusteeship of specialised fashion ateliers and sponsorship of the Grand Palais, for which the brand is bankrolling a $40m (£30m) renovation.

Of Brigitte Macron’s clear preference for rival brand Louis Vuitton, which the French president’s wife wears for most engagements – she has never been photographed wearing Chanel Pavlovsky would say only: “I have met her several times, and she is extremely nice. [What she wears] is her choice, of course. At Chanel we are not pushy.”

Chanel is also taking a socially responsible stance. To counter criticism of the wastefulness of extravagant sets being accessible only to an elite audience, Chanel will invite schoolchildren and the families of employees to events on La Pausa. “And after that, the whole set will be recycled, upcycled or repurposed,” said Pavlovsky. “Nothing will be thrown away.”

The Francophile mood is the most striking trend to emerge from the season of cruise shows, which Chanel kicked off in Paris. Christian Dior, which staged last year’s event in California, will show its collection in the grand stables of the Château de Chantilly, 30 miles from Paris. Louis Vuitton will swap last year’s Japanese location for the French riviera, while even Gucci – a storied Italian brand, but owned by the Paris-based Kering – moves from Florence to Arles.

Aside from Prada, showing in New York in this weekend’s run-up to the Met Gala, and MaxMara, who will stay in their hometown of Reggio Emilia, the centre of gravity during fashion’s increasingly important cruise season is very much in France.

The cruise shows, which span the month of May, see the most powerful names in the fashion industry go head to head. Only the industry’s highest rollers, who can afford the eye-popping expense of staging a show spectacular enough to draw the world’s attention in one 20-minute slot, can afford to compete in this unofficial Champions League of fashion. The egg-box structure on a man-made island in Dubai which Chanel built as a catwalk for a pearl-themed collection in 2015, a nod to the emirate’s 1,000-year pearl diving industry, was said to have cost $1.7m. The pay-off is that “at fashion week, you have 20 minutes for us and then it’s on to the next show. At cruise it is just about Chanel,” said Pavlovsky.

Coco Chanel pioneered cruise as a fashion concept. Collections go on sale in November, originally aimed at affluent women packing for a Caribbean winter cruise who did not wish to be seen again in dresses they had worn that summer but could find nothing appropriate in stores full of winter clothes. Wearable rather than trend-driven, colourful and upbeat, designed with comfort and flexibility in mind, cruise has outgrown its ocean-liner origins to find a modern market among women looking for wearable but Instagram-friendly pieces for the festive party season. “Of the eight collections in a year, in terms of sales, cruise will be at number one or two,” said Pavlovsky.

The Wertheimer brothers who own the controlling interest in Chanel have never disclosed revenues, which are estimated to be around $6bn each year, but the brand still has no plans to sell clothes online. “We do a lot, digitally. We are number one on Instagram, for instance,” said Pavlovsky. “But I believe if we sell our customer a jacket for £7,000, we have a responsibility to make sure that it fits her properly.”

Karl Lagerfeld took his bow accompanied by his longtime studio director Virginie Viard, once again fuelling speculation of a handover. Chanel insist that any discussion of a successor to Lagerfeld, who has a lifetime contract at Chanel, is disrespectful to the 84-year-old designer who has led the house for 35 years.