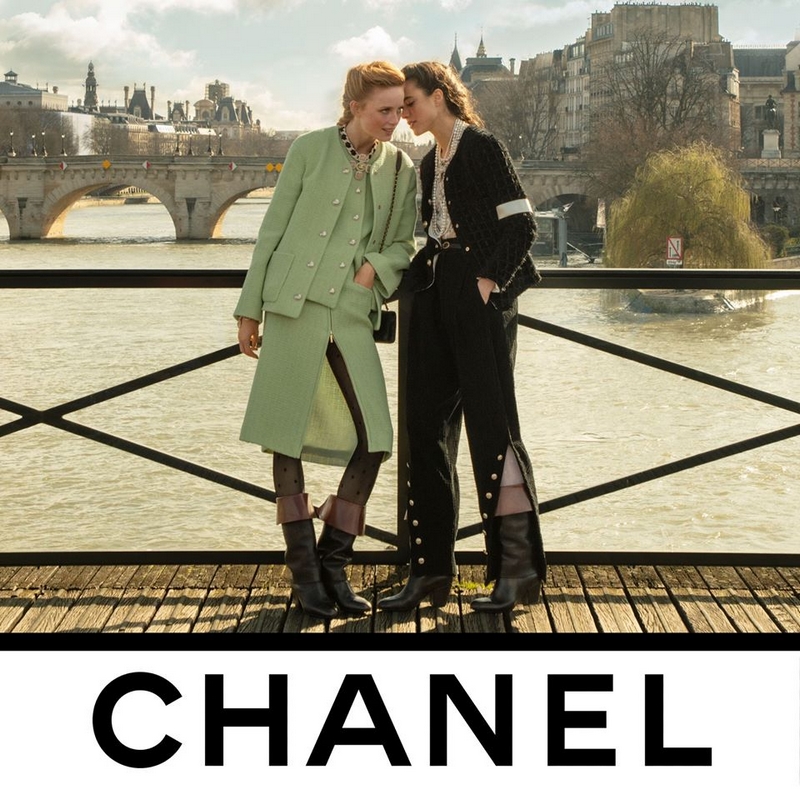 “For the runway show, no frame. I don’t like framing,” said Chanel’s artistic director, Virginie Viard, before the brand’s autumn/winter 2020 fashion show in Paris.. Its quite a statement of intent given the megabrand’s decades-long ownership of the concept of fashion show as theatrical blockbuster.

So on Tuesday, there was no rocket taking off in the middle of the catwalk (2017); no supermarket complete with boxes of Chanel-branded ketchup bottles (2014). Instead, models walked against a glossy white set, with layers of curvy seating trimmed with black, recalling a map’s contour lines.

Viard, Karl Lagerfeld’s long-term right-hand woman, has taken a softer, subtler approach since taking over after the legendary designer’s death just over a year ago. This collection continued in that vein, throwing the focus on to more than 70 mainly monochrome looks, with occasional hints of coral pink. Current trends were addressed; puffy sleeves, Wolf Hall necklines and thigh high splits in midi skirts were all present.

Models came two or three abreast at times. Gigi Hadid walked, arm in arm, between two other models, a move which felt protective given her altercation last season with a catwalk gatecrasher.

Trousers came with poppers at the side, fanning open to display footwear described, in press notes, as “seven-league boots” – which according to Charles Perrault’s fairytales allow wearers to traverse seven leagues per step – inspired by a pair once worn by Lagerfeld.

There was a New Romantic mood in those piratey, Adam Ant-ish boots and the many ruffle-fronted shirts; Madonna and Boy George were evoked in the liberal use of crucifixes. Two large crucifixes were knitted into jumpers, recalling the Lacroix crucifix jacket famously chosen by Anna Wintour – controversially, at the time, paired with jeans – for her first Vogue cover in 1988. That 1980s-influenced crucifix was the main trend takeaway, and looked ripe for reinvention.

Kanye West staged a more bombastic, Lagerfeld-esque spectacle the previous evening. In a contrarian move, as some other brands scaled back fashion week plans owing to coronavirus fears, the musician’s Yeezy label made a surprise last-minute entry on to the schedule.

No designer since Giorgio Armani has loved beige as much as West, who brought sand and ochre to the catwalk, in a pumped-up version of the dusty, post-apocalyptic athleisure that has become his signature. Stand out pieces included funnel-necked irregularly undulating puffer jackets, although West’s six-year-old daughter, North West, stole the show when she took to the catwalk and rapped, and duly melted the internet.

Stealing Paris fashion week must have been satisfying for West, whose last Paris show was his 2011 debut. Critics were underwhelmed then, and less forgiving than they might have been, given his prior declaration that the show would “change the course of fashion”. Since then, however, that prophecy has come true, particularly in the trainer market. West’s much-copied Yeezy line racked up sales of more than $1.5bn (£1.2bn) in 2019, the bulk of which from the ubiquitous, squishy wedge-shaped Yeezy Boost 350s.

Earlier on Tuesday, Gucci cancelled its cruise show, which had been scheduled to take place in San Francisco on 18 May. The move was made in response to “the ongoing uncertainty prompted by the coronavirus outbreak, as a precautionary measure”, according to a company statement.

Tokyo fashion week, which was set to take place from 16-21 March, has also been cancelled. Prada has also postponed its 21 May cruise show, which was set to take place in Tokyo, although Armani, Chanel, Dior and Max Mara’s cruise shows are still taking place in April and May. Aside from a few cancelled events on the periphery, Paris fashion week has largely gone ahead, and will close with the Louis Vuitton show late on Tuesday.

The economic impact of the coronavirus is likely to be heavily felt in fashion. It has been forecast that the luxury market could lose €30-40bn in sales this year, as the industry suffers from store closures and disrupted supply chains.