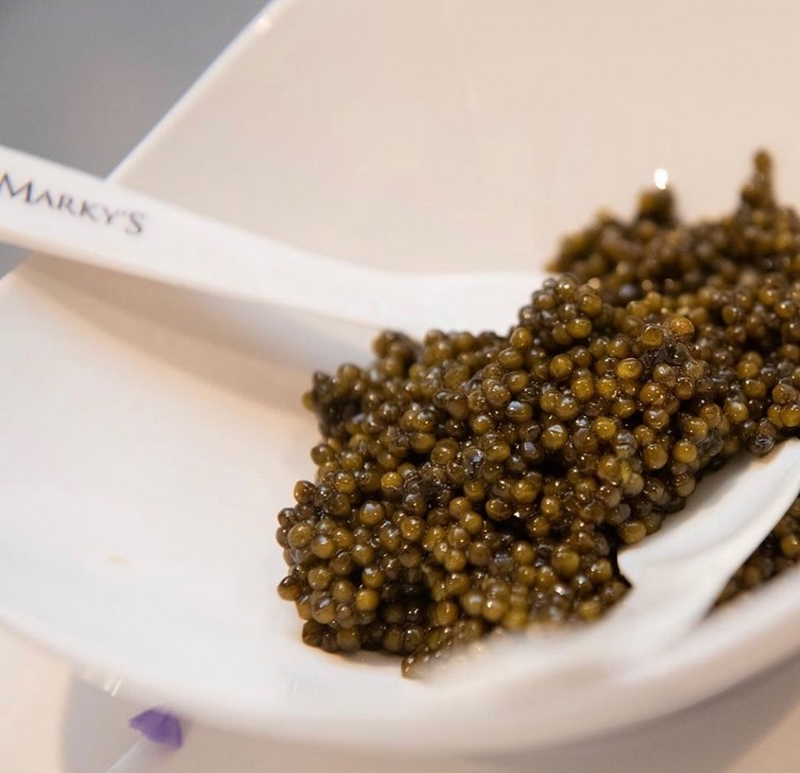 This article titled “Why is caviar still on the menu?” was written by Clare Finney, for theguardian.com on Wednesday 16th October 2019 12.24 UTC

There are some words that are impossible to say without sounding fancy. “Caviar” is one of them. It’s the hallmark of fine dining; the crown jewel of a canape; one of the last few foods that, in a world of lobster baps and truffle mash, remain flashy. When the Sous Chef website looked at the UK’s two- and three-Michelin-starred restaurants this month, it found that caviar featured on 72% of the menus.

Yet there is no denying caviar has an image problem. Until just a few decades ago, fishermen would haul beluga sturgeon out of the Caspian and Black seas, cut out the “roe sacks” that held their eggs, and throw the fish back in to die. As a result, sturgeon became critically endangered. The international trade in wild sturgeon from the region has been banned since 2006, and although there are a growing number of sturgeon farms around the world that attempt to make the process more sustainable, the methods used to extract the eggs, and the morality of dedicating valuable resources toward producing this symbol of luxury, mean the ethics of caviar remain vague.

“It’s not like shark-fin soup, where you have desperate fishermen catching sharks, cutting off their fins and throwing them back,” says Chris King, executive chef of the Langham hotel in London. “There’s a moral question to caviar, of course, but sturgeon can be farmed. It is farmed.” Serving the caviar he sources for the Langham is, he says, no more or less ethically troublesome than serving quality beef or farmed Scottish salmon. What matters to King is that he buys the best and serves it in such a way that his diners “understand what the fuss is about. Most people don’t have it often. It’s important they get a good chunk, and it’s served in an elegant way.”

Yet attitudes towards sourcing and serving caviar are shifting. Although the Langham still offers it in those gleaming round tins, to be eaten by the spoonful, it is rarely called for nowadays; gone, too, is the demand for blinis with a dollop of creme fraiche. “These days, I sell caviar much more in dishes where it is an element, such as our roasted scallops with caviar,” King says. “Tastes are changing, and people are asking if tins and blinis are really the way to appreciate caviar, with all its nuances of texture and taste.”

Charles Smith, head chef at the Lords of the Manor hotel in Gloucestershire, says he values caviar “more for the flavour profile than the prestige around it”. He likes to dish it up alongside native lobster, whose sweet meat pairs perfectly with the eggs’ saltiness. “There will always be those people coming into the hotel and wanting a tin of caviar for the aesthetics of it, but to me it’s an ingredient,” he says. Gary Robinson, executive chef at Balmoral hotel in Edinburgh, takes a similar line: “We would only ever use caviar where a dish is enhanced by its taste and texture – never for opulence or show.”

In the past, Smith has traded directly with a small producer in Germany: “I know these guys; they look after their fish around the clock, provide the right nutrition, environment and so on. I feel comfortable serving this caviar, where I might not with a mainstream supplier.”

So far, so above board. Yet even sustainable caviar can slip into murky waters. While some aquafarms harvest the roe alongside the flesh at the end of the sturgeon’s life, others extract the eggs while the fish are still alive, around every two years. This would be fine were sturgeon like salmon, trout or other fish that can be “milked” without too much trouble – but they aren’t. “They are prehistoric fish, dating back 250m years, and they haven’t changed much,” says Harry Ferguson, operations director of Exmoor Caviar farm in Devon. “Their roe sack isn’t like a bag from which the eggs spill out. You have to make at least a two-inch incision and massage the roe out.” In its favour, this is better than killing wild sturgeon – and those farms that do produce caviar this way claim to make it as painless as possible.

As well as the ethical questions about egg extraction, there’s also the issue of “fish laundering”, as Dr Krzysztof Wojtas at Compassion in Wild Farming (CIWF), points out. “Mackerel, sardines and other foraging fish are landed in Africa or South Asia, and processed for carnivorous fish food. By farming for caviar, you are using food that could feed the many to make a high-value product for the few,” he says. The same could be said of salmon, another carnivorous farmed fish – but that’s hardly an endorsement when you consider how negatively salmon farming affects the environment.

“People buy themselves nice shoes, facials, jewellery every single day – of course they should also buy caviar regularly,” says Mark Zaslavsky, the CEO of Marky’s Caviar in the US, whose New York restaurant lists a BEC, or “beluga bacon, egg and caviar sandwich” among its brunch options. Yet just as farming has reduced salmon from a delicacy to a common sandwich filling, with the consequences of overstocking ranging from fish-lice infestations to pollution of the surrounding waters with faeces and chemicals, so CIWF fears the same could happen with sturgeon.

But that’s impossible, says Ferguson, who says that sturgeon farming is not like salmon farming. “There is nothing we can do to cheat the system. There is no advantage to high stocking density, because it will adversely affect the flavour.” Ditto poor standards of nutrition or welfare. No one is looking for budget caviar, he says. “There’s no point in us producing anything less than the best.”

Like Marky’s farm, Exmoor’s Caviar’s approach to producing sustainable and ethical caviar is to rear the fish to maturity, then use it all: roe, meat and organs. For King and Smith, the best way to respect caviar as an ingredient is to source it carefully, use it wisely (the Langham turns any caviar it doesn’t sell into a salty seasoning) and serve it well. Some chefs outside the high-end market are opting for alternative fish roes; others, such as the chef Chung Chow of New York’s Hawaiian restaurant Noreetuh, are keeping caviar for special occasions. “If we want to educate people about how caviar is produced, we need to depopularise it,” Chow says. “Having more consumers in the market is not going to fix the problem.”