Lelian Chew is a wedding planner with an unbelievable budget. For the last six years she has been organising the nuptials for some of the wealthiest couples in Asia, where she has been exposed to staggering levels of extravagance. 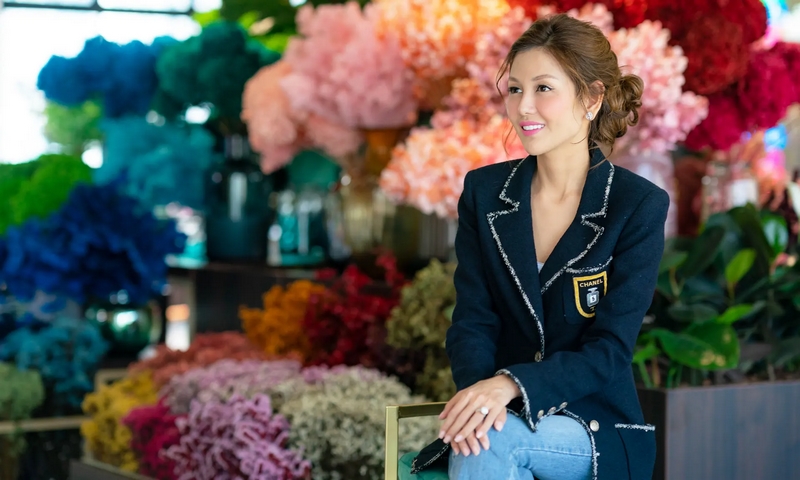 Lelian Chew is a wedding planner with an unbelievable budget. @BBC

This article titled “Million Dollar Wedding Planner review – the woman who makes brides walk on water” was written by Lucy Mangan, for The Guardian on Thursday 10th October 2019 21.00 UTC

The most fascinating thing about BBC Two’s documentary Million Dollar Wedding Planner was not, as you might have expected, the ceaseless extravagance of the mega-wealthy clients whom Lelian Chew (the eponymous planner) serves. And, while watching people choose handfuls of Cartier diamonds, pick out sheaves of Vera Wang dresses and watch hundreds of thousands of dollars’ worth of flowers be unloaded to dress a marquee is compelling, the viewer was drawn back again and again to Chew herself. You might think the first requirement of a wedding planner – let alone one dealing exclusively with China’s burgeoning super-rich class – is to look positively joyful at all times. Serious, professional but essentially happy. But Chew looks haunted.

She started her business six years ago after 10 years at Goldman Sachs. Now she works with about 10 couples a year who have almost unlimited money to spend on the bespoke wedding of their dreams. Each wedding takes 18 months each to plan, and the programme follows three of them. We meet 31-year-old Prairie and 33-year-old Roger, who met as law students and are planning “a small, destination wedding” with 100 guests at a five-star resort in Bali, which will be supplied with the silverware, plates and glasses that Prairie has chosen back home, along with many fragile flowers and 35 staff flown in from Singapore.

There is 26-year-old Febyan, whose family made its fortune in ceramics manufacture, and his 25-year-old interior-designer bride-to-be, Angie, who are holding their wedding at his Italian vineyard, and having a platform built in the pool so they can walk on water. And there is 28-year-old doctor Noel and her businessman fiancé Derek. They wanted an outdoors wedding overseas, or a destination wedding, but his mother-in-law “provided another point of view”. A sudden point of connection is made with viewers the world over.

Now, they are having 600 guests to a traditional Chinese service at their local Grand Hyatt hotel. Mother-in-law made the booking, paid the deposit and presented them with a fait accompli. They are lucky, perhaps, that there is a much stronger tradition in China of parents dictating nuptial terms even under ordinary financial circumstances than there is in other places, and they accept this turn of events with equanimity.

“Lelian told me straight up that it’s not just about me,” says Noel, “and I really need that honesty.” I suspect it might also be about Lelian and the increased fee that providing for an extra 500 guests will surely command, but I’m a desperate unromantic and you shouldn’t listen to me.

Nevertheless, as the three sets of arrangements unfurl it becomes harder to avoid the looming sense of – is it simple waste? Obscenity? Or something verging on immorality – as ever-larger amounts of money are disgorged by members of the 1% of Chinese households who own a third of the country’s wealth to mark a day or two out from their uberprivileged norm?

Chew has a thousand-yard stare whenever she is pressed for her opinion. “It is unfair to the next bride if we don’t let them have free rein over what they want,” is all she will say about people’s willingness to indulge themselves. A similar omerta is observed by other employees. The organiser at Prairie and Roger’s wedding nearly slips by suggesting she doesn’t understand spending so much but then corrects herself: “Let me rephrase. It’s such a personal decision. It is not my place to judge or question. I just think of making it beautiful.”

All in all, Million Dollar Wedding Planner was, itself, marvellously restrained. What could have been an extravagantly point-and-boggle hour was instead infused with larger questions and insights into how ancient traditions have metamorphosed (or metastasised) into something else, like the belief that the more guests you have, the more blessed your relationship will be. That idea stemmed from the days when inviting the entire village was a way of strengthening community bonds.

The programme asked questions about untrammelled capitalism, and about where we go from here. Chew knows where she’s going – to a new office in Shanghai. “You can be an overnight millionaire here because the volume is just insane,” she says. But she doesn’t look particularly happy about it.