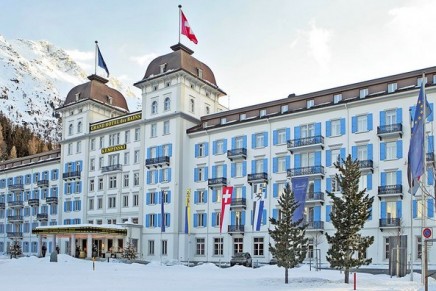 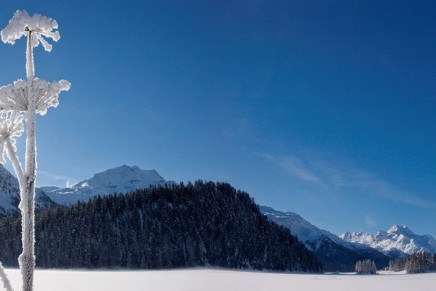 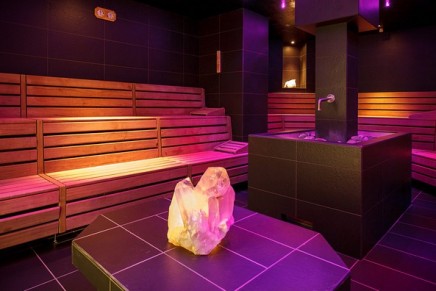 This article titled “Your good health: an Alpine spa crawl” was written by Debbie Lawson, for The Observer on Sunday 28th February 2016 07.00 UTC

Scuol, in eastern Switzerland, has been hosting health tourists since the 1830s. Back then, people congregated in “drink halls” built on natural springs, sampling their mineral-rich bounty. Everyone had their own tankard, labelled to avoid the spread of disease. Some waters had such a laxative effect that toilets had to be built at regular intervals along the path back to town.

I found myself naked in mixed company, bubbling jets of mineral water wobbling our bare buttocks

Today, the main reason to go to Scuol (for the non-skier, at least) is to visit the town spa, Bogn Engiadina, with its steam rooms and saunas, indoor and outdoor pools, all pulsating with pure mineral water and accompanied by stunning views of the snowcapped Alps.

The town has 25 different mineral water springs, and Bogn Engiadina is supplied by four of them. It offers all the trappings of a luxury hotel spa complex but in a more democratic setting: local grannies sharing a bench with Zurich businessmen in their Speedos. For a little extra, entry can be had to the Roman-Irish spa, a series of rooms in an inner sanctum where swimsuits are verboten and I found myself naked in mixed company, bubbling jets of mineral water wobbling our bare buttocks.

This part of the Alps, with its fresh air, pure water and magnificent views, has long been known as a wellness destination, where Hollywood stars, prime ministers and oligarchs go to relax. But touring the watering holes of Alpine Switzerland and Italy is not as expensive as you might think. As a day visitor you can luxuriate in one for the price of an evening in the pub. And, as I discovered, using the Engadine Valley as a conduit, you can even organise yourself a spa crawl.

I began in Zurich, an underrated tourist destination: because it is primarily a business hub, prices (including flights) drop dramatically at the weekend, bringing the cost of the financial capital’s impressive art galleries, shops and restaurants into line with those of other European cities. I stayed at the historic Hotel Adler, famed for its fondue and handy for the mainline station, then travelled east.

The spectacular three-hour journey to Scuol took in Klosters and Davos, a first glimpse of mountains dotted with wooden farmhouses and passing alpine skiers, and fields of powder snow pockmarked by animal tracks.

Further up the valley, as the train climbed to 1,800m and the snow thickened, St Moritz beckoned, with its particular class of bling. This town, little more than 5,200 inhabitants scattered around a frozen lake, owns alpine tourism, having invented and honed it over 150 years. The season is organised around polo matches and gourmet festivals: it sounds expensive, and it is. But if you feel like a splurge, the Kempinski Grand Hotel des Bains is a bit of a treat: a fairytale hotel backed by pine trees, with a spa situated right on top of the Mauritius Spring – an iron-rich natural water source discovered in the Bronze Age.

The hotel was originally called a kurhaus because of its healing powers. I was warned that the spring water tasted like blood, but as it was “happy hour” in the spa – when an afternoon visit costs just £35 – it seemed rude not to try a glass. (For the record, it’s just like the liquid iron sachets you can buy in Boots.)

The pool area was full-on glamour, with snowy views and granite walls, where guests in white Kempinski robes and day visitors wandered in and out to swim a few lengths. Entering the sauna and steam room area poses another challenge for the reluctant naturist. But the towels were quite generous, even after memories of last night’s tagliolini with black truffle had made a more lasting impression around my midriff.

The railway line linking St Moritz and Tirano in Italy was declared a Unesco World Heritage site in 2008. It’s an incredible feat of engineering, reaching 2,253m above sea level – the highest railway crossing in Europe. I set off for Tirano on the Bernina Express and the final spa of my trip through unparalleled scenery of glacier gardens, turquoise lakes and mountains topped with dollops of snow, all viewed through the curved windows of a panoramic carriage. At the end of the two-hour ride – great value at £21/38 (2nd/1st class) – I took a bus to the premier ski and spa resort of Bormio and checked into La Genzianella, a comfortably chic midpriced hotel with warm ambiance and a great restaurant.

Not far from here, QC Terme Bagni Nuovi, set on the edge of Stelvio national park near Bormio, is a grand hotel built as a palace in 1836 for the Queen of Austria. Its spa, open to budget-conscious day visitors as well as hotel guests, is a pink confection of Art Nouveau and endless rooms, each containing mineral pools pitched at varying degrees of nice warm bath. The scent of alpine herbs and attar of roses hung in the air. Some rooms looked like torture chambers, with raised slabs on which you’re pelted by downward torrents of warm rain.

Outside there’s even more fun: a sauna and relaxation cabin with hanging chairs, jacuzzis fitted with frames you can lie down in, and a sheep dip converted into a pool with underwater music and an attached shepherd’s bothy heated by a log fire. Local farmers still have the right to bathe their livestock in the thermal waters that supply the spa.

Further up the mountain is the hotel’s older sister, Bagni Vecchi, reached by foot or via the spa shuttle. Here, you can bask waist-deep in the steamy waters of a 2,000-year-old cave that leads directly to the mouth of an ancient thermal mountain spring. These Roman baths were frequented by Pliny the Elder and, later, Leonardo da Vinci. If you’re looking for a recommendation, they don’t come much higher than that.

Fly from London, Birmingham and Manchester to Zurich from £71 with SWISS (swiss.com); Milan Bergamo to London around £35, Ryanair (ryanair.com).