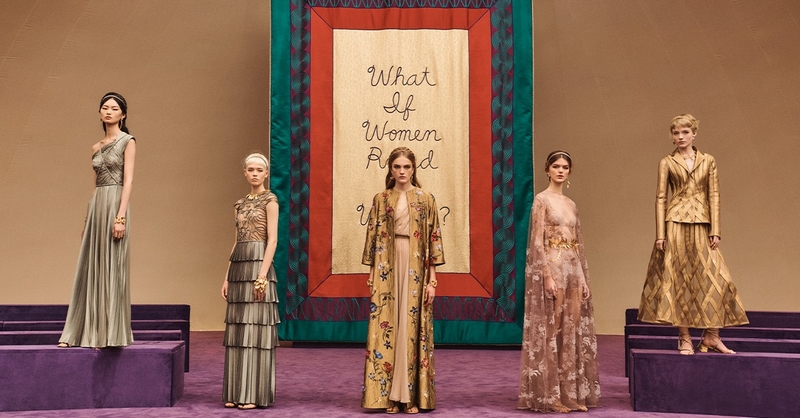 If women ruled the world: Dior’s Judy Chicago tribute is more than a gimmick; @dior

This article titled “If women ruled the world: Dior’s Judy Chicago tribute is more than a gimmick” was written by Hettie Judah, for theguardian.com on Tuesday 21st January 2020 16.49 UTC

On Monday, Dior’s haute couture show took place within the mighty womb of a female deity, created by formidable American artist Judy Chicago. Guests were seated within a custom version of an unrealised sculpture the influential feminist had first proposed in 1977 as Inflatable Mother Goddess. Chicago’s proposition “What If Women Ruled the World?” set the tone for a fashion collection inspired by proto-feminist heroines dating back to prehistory.

Embroidered banners, three-metres high, posed follow-on questions: “Would Buildings Resemble Wombs?” “Would God Be Female?” “Would There Be Violence?” “Would Both Women and Men Be Gentle?” It was a spectacular backdrop for the fashion show, though Chicago pointed out that the sculpture and its hangings were more than that. “We made art,” she told the New York Times.

This is not the first time Maria Grazia Chiuri, artistic director of Dior, has looked to women artists for inspiration. For her second collection, models trod the runway in Breton tops embroidered with “Why Have There Been No Great Women Artists?” in tribute to art historian Linda Nochlin. Ever since, feminist art has been as much of a house signature as the bar jacket.

These spectacular collaborations are not gimmicks. As an art nerd they may excite me, but I don’t kid myself that the fashion world will necessarily thrill to collaborations with less-known octogenarian feminists. These are not easy or flippant references: internationally renowned, Chicago is a better-known exception among those whose work Chiuri has celebrated on the runway. For all, the Dior collaboration offered a wider audience – and, I imagine, a welcome injection of cash toward the end of uncommercial careers. As Chicago has pointed out: “It’s no fun to be old and poor.”

Chiuri is to be congratulated. As the first female artistic director of Dior she has a highly visible public platform and is using it to celebrate work she is passionate about, and which she believes deserves a larger audience. Not only is she supporting women artists, whose work continues to be underrepresented in museum collections and undervalued at auction, in celebrating magnificent older women she resists the fashion world’s obsession with youth.

Is it weird for a feminist artist to work with a fashion brand? Only if you believe that fashion and feminism can’t be bedfellows. Does fashion promote unrealistic beauty and body ideals? Yes, but no more so than social and network media. Does it engage in the oppression of women through reliance on a casual, unregulated workforce, much of it female? Often, yes. These are all wider social and industrial issues that need to be addressed on a wider social and industrial level. (Chicago’s banners, incidentally, were made with the Chanakya School of Craft, a nonprofit organisation based in Mumbai.)

Fashion is also about play, identity, challenging ideas of beauty, celebrating well-made things, sexual allure and the transmission of coded cultural messages. Chicago – who sports violet hair, dark purple lipstick, sharp suits and eye-catching jewellery – is not shy of the transformative effects of colour, form and beautifully crafted objects. She celebrates women as sexual beings, as creators, as mothers and caregivers, and has recently explored the process of ageing and the prospect of death with great frankness.

The very reason that Nochlin felt the need to pose her question “Why Have There Been No Great Women Artists?” – and by extension the reason that Chiuri has felt it important to celebrate women at Dior – is that the art world has been, and continues to be, bedevilled by systemic prejudice, of which sexism is only one component. It seems to me no more anomalous for feminist artists to engage with the fashion world, for all its faults, than an art industry that has for decades failed to adequately engage with and value their contribution.

The impulse to question the validity of support offered to one woman by another perpetuates a destructive ideal, according to which no feminist gesture can ever be adequate, no cultural contribution sufficiently pure. Cherish the support. Learn from it. Emulate it. As Nochlin wrote at the end of her famous essay: “While great achievement is rare and difficult at best, it is still rare and more difficult if, while you work, you must at the same time wrestle with inner demons of self doubt and guilt, and outer monsters of ridicule.”