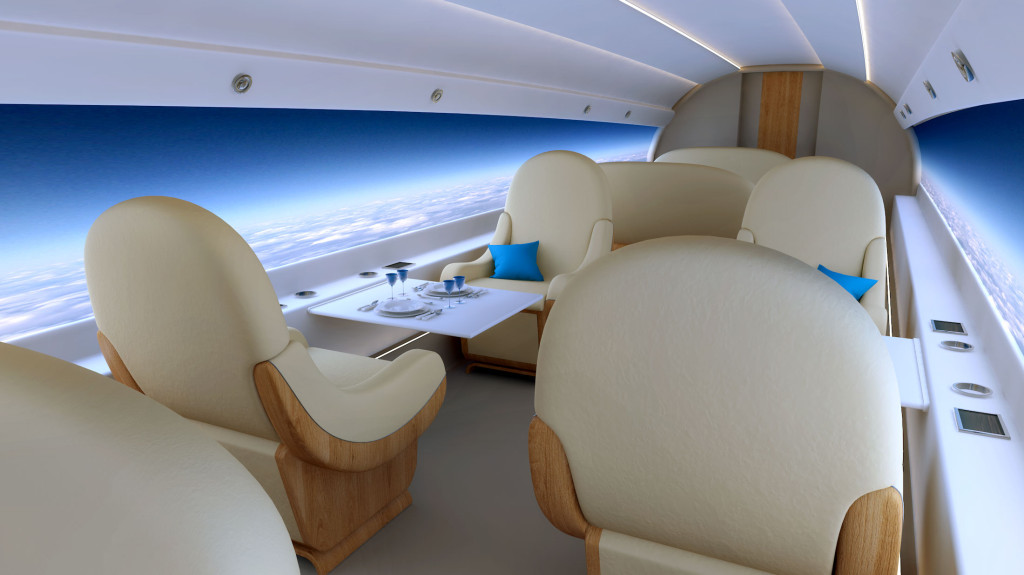 In the near future, we will explore more of the world, faster, as the supersonic travel will be available to everyone. Spike S-512 project is a concept of a windowless supersonic business jet that will enable travelers to reach destinations in half the time it currently takes. Executives will be able to fly from NYC to London in 3-4 hours instead of 6-7 hours. LA to Tokyo in 8 hours instead of 14-16 hours.

Spike Aerospace’s design plans for Spike S-512 include gazing at the sky in windowless cabins. The conspicuous absence of windows is a high tech innovation which will reduce drag and will eliminate a number of challenges in the design and construction of an aircraft’s fuselage. The cameras installed on the aircraft will livestream images back onto high- definition screens.

The interior walls will be covered with a thin display screens embedded into the wall. Cameras surrounding the entire aircraft will construct breathtaking panoramic views displayed on the cabin screens. Passengers will be able to dim the screens to catch some sleep or change it to one of the many scenic images stored in the system.

There are several reasons for removing the windows from the cabin. It has long been known that the windows cause significant challenges in designing and constructing an aircraft fuselage. They require addition structural support, add to the parts count and add weight to the aircraft. But until recently, it has not been possible to do without them.

With the micro-cameras and flat displays now available, Spike Aerospace can eliminate the structural issues with windows and reduce the aircraft weight. In addition, the very smooth exterior skin will reduce the drag normally caused by having windows.

“There are a lot of reasons to build this plane. It will save passengers time so they can explore more of the world. Wouldn’t you love to go hiking in New Zealand for the weekend, or fly to Paris for lunch? The supersonic jet will let you do more, faster. For businesses, it will help them manage operations and make investments more dynamically. It will bring them closer to their customers, more often,” explained Spike Aerospace.