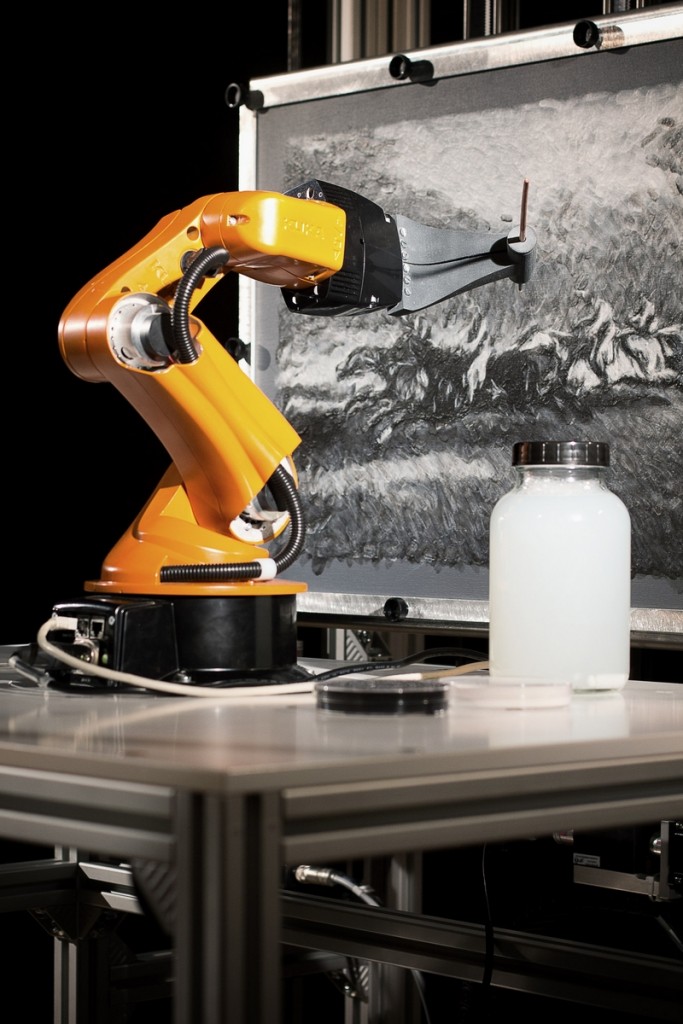 This article titled “Vincent van Bot: the robots turning their hand to art” was written by Nadja Sayej, for theguardian.com on Tuesday 19th April 2016 17.54 UTC

A painter dips a small paintbrush into a cup of black paint, creating an impressionist portrait of a smiling old woman. With the skill of an old master, e-David is a one-arm robot powered by a PC, five paintbrushes and a palette of 24 colors. He takes photos as he paints, calculating where to lighten or darken his masterpiece, showing that artworks made by robots are not only made by the programmer.

Built by University of Konstanz professor Oliver Deussen, e-David is now competing alongside 25 other robots for the first-ever Robot Art contest, which battles for best artwork.

“We’re so early with the possibilities of robots and art, the sky is the limit,” said the competition founder, Andrew Conru. “It’s refreshing to see technology in action.”

It’s a change of scenery to see the audience voting for best artwork in an art world built on elitist values and big bucks. The public voting opened on Monday and winners will be announced 15 May.

“I believe art is not necessarily defined by art critics, it’s defined by how people define meaning and enjoyment,” says Conru, an early dotcom entrepreneur and 19th-century art collector, he says he began the contest to merge his love of art and technology.

“The musicality of visual art has always resonated with me,” he says on the phone from Seattle. “And I’ve always been interested in applying technology, be it applying industrial design or making the world we live in more aesthetically pleasing.”

Powered by Conru’s not-for-profit organization Compute.org, which funds innovative ideas that are overlooked by profit-driven investors, the winning proceeds of $100,000 will go to schools or charities for the winning painting bots, which are created by school teams.

“The real mission is to inspire students to look at technology and be creative,” said Conru.

Among the competitors, the University of Manitoba team competes with the Picassnake, a custom-made robot draped in a green snake toy. The snake bot paints from music, meaning that it dances to indie rock – improvising brushstrokes into unpredictable abstract paintings.

All artwork in the competition are more than the typical landscapes and photorealistic portraits. “I was telling the teams, if their robot knocks over a can of paint and they think it’s beautiful, they should submit it,” said Conru. “We have no limit on to what constitutes art.”

The Carnegie Mellon team have created a bot that works like an invisible coloring book. The robot has a paintbrush that is attached to a robotic arm and guides the human hand to follow the guidelines set in a paint program.

“It steadies your arm,” said Conru. “If you move away from the curve on the computer, it will push you back in the direction you should go – it doesn’t allow you to make adjustments on the fly. It’s an interesting interpretation of how a robot assists an artist.”

Other bots are portrait artists that work from photos, like the bots by Pindar Van Arman, a painter and software developer who has created five bots, including two competing here, cloudPainter and bitPaintr. An affiliate of George Washington University, his bots have garnered recognition for painting portraits of friends, family or Jesus and the Statue of Liberty. But the bots have been criticized as over-engineered printers, even though they improvise independently.

“They look at how people are painting and try to take direction from them,” he said, as the cloudPainter crowdsources its touchscreen brushstrokes online through a website.

“Sometimes, no one is interested and the robot works alone, other times a couple of people paint along with the robot,” said Van Arman. “And sometimes, it goes viral where hundreds discover it and go crazy.”

The guest brushstrokes are incorporated into the bot’s painting algorithms, which sometimes leads to vandalism.

The bots are a sign of the times. “Soon – and I mean sooner than most people are comfortable with – we will not be performing repetitive tasks or work,” said Van Arman. “AI will be doing all that.”

Van Arman gets philosophical about his self-portrait he created with an automated bot. “Was it the robot or me that made the painting?” asks Van Arman, who will give a TED talk on the topic in Washington on 23 April. “It made every aesthetic decision that I typically make when I am commissioned for a portrait.”

The portraits created by his bots range from $100 to $2,000 and roughly 1,000 portraits have been made in total (portraits of children are common). While the bots only take 12-24 hours to complete a painting, there’s a six-month waiting list. But that doesn’t seem to worry Van Arman.

“I could make a living at this, but I don’t want to,” he says. “Worrying about sales gets in the way of the art, and I don’t want to worry about what sells and what doesn’t.”

None of the other bots will have their art for sale, either, but that’s not to say they won’t in the future. “Nobody has mentioned about selling their artworks, but hopefully this becomes a legitimate art form and there are people buying it,” says Conru.

“They’re quite stunning considering how they’re generated,” he adds. “Looking at them as a piece of art, if I didn’t tell you this was done by a robot, you would never know.”