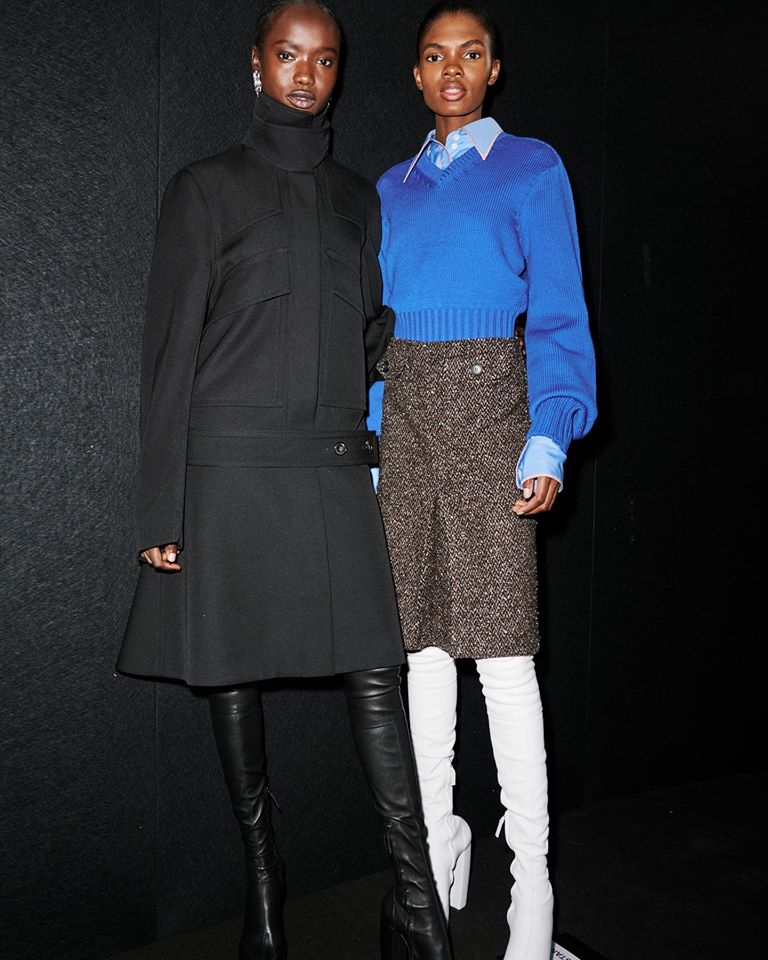 “It’s about creating a collection that is elevated enough for the catwalk, but also, you should be able to wear everything.” – Victoria Beckham; @Victoria Beckham

It is six years since a new hemline made fashion headlines. But on Sunday morning at London fashion week, Victoria Beckham broke with the mid-calf length that has become ubiquitous in fashion with a radical trend: the knee-length skirt.

A knee-length skirt worn with a blouse and sweater may not sound like a revolutionary look. But Beckham’s influence – as a designer and a much-photographed celebrity – having been key in making longer skirts into a mainstream trend, her volte-face may signal the beginning of a wider trend.

“I broke my own rules today,” said Beckham backstage after her show. “I’ve been wanting to do something shorter for a while – I know that I still want to wear a shorter length sometimes. So I’ve been trying to figure out how do I do that in a cool way. And I’m a minimalist, so I’m always looking for ways to make clothes that are exciting but still wearable. I want to challenge myself, not challenge the customer. Clothes shouldn’t make life difficult.”

What Beckham called the “gently rebellious” mood of her show extended to the Little Simz soundtrack. With her family attending, Beckham said she had warned her eight-year-old daughter, Harper, that “there might be rude words that you wouldn’t normally hear”.

Tailored culottes, or vented tweed skirts, finished just above the knee. Pie-frill collar blouses, velvet blazers and chain belts added to the bourgeois-chic effect, while tight thigh-high boots “make the look sexy and tough at the same time”. For evening, a midnight blue fluid silk dress to mid-thigh with high, draped neckline and full sleeves represented “my version of a modern party dress,” Beckham said. “I haven’t been a typical ‘party dress’ person for a long time, actually. If I go out at night I am more likely to wear some kind of tuxedo. But I want to wear this. I like how the volume on the sleeve offsets the shorter length.”

Richard Avedon’s dynamic 1960s portraits of a leaping Penelope Tree were on Beckham’s mood board this season – “something about the spirit and the freedom, more than the clothes” – along with images of Marisa Berenson, who “used to wear the same clothes for day and evening, but put more makeup on at night,” said Beckham. “I think that’s quite cool.”

The all-American fashion powerhouse Tommy Hilfiger is making a guest appearance at this London fashion week with a show co-designed with Lewis Hamilton and the Grammy-award winning R&B singer HER.

But Hilfiger “doesn’t believe in traditional fashion shows”, he says. “What I believe in are unforgettable experiences, where you show clothes. It has to be truly memorable, otherwise it’s just not relevant.”

Hilfiger lays claim to be the godfather of streetwear. “We created streetwear in the late 1980s before streetwear existed,” he said at a preview before his Tate Modern show. “We started out as a preppy brand, and then we added sport. Not sportswear as it had been seen in fashion before, but the clothes real athletes wore to play basketball, football, hockey – oversized clothes, bright colours, big type and numbers. The fashion writers at the time called it hip-hop wear, but we said no, hip-hop kids are wearing our look, which is called streetwear.”

HER brought her “unisex, utility, oversized” style to boilersuits with neon ring pulls on the zips. The three-way collaboration is the latest in a series 68-year-old Hilfiger has done with young fashion influencers including Zendaya and Gigi Hadid. “I was afraid to grow up, I guess,” he explained.