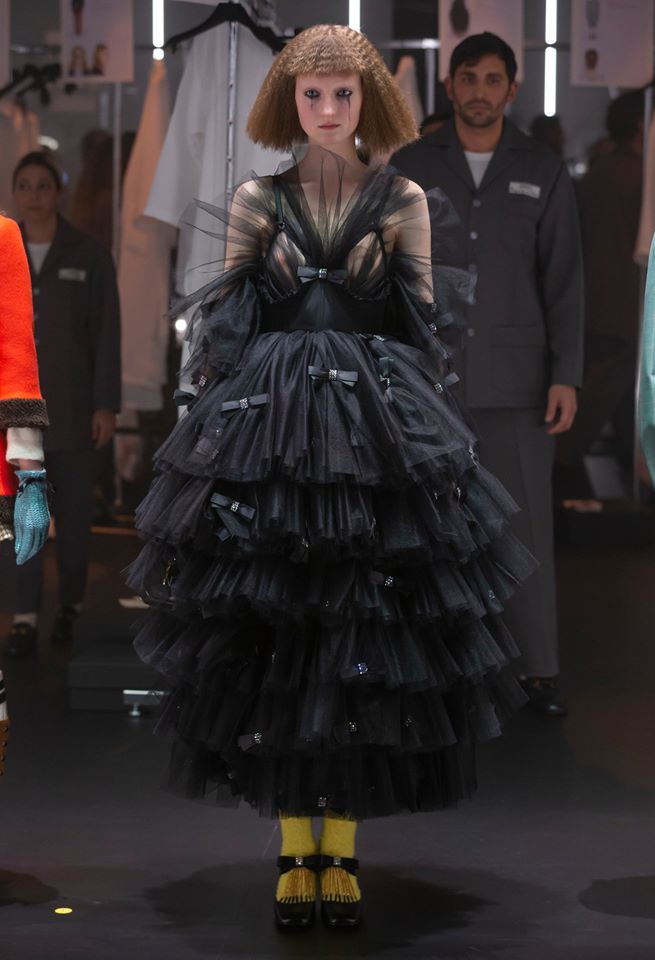 This article titled “Gucci’s creative director: ‘Fashion is not only about garments’” was written by Hannah Marriott Fashion editor, for The Guardian on Wednesday 19th February 2020 19.53 UTC

The backstage area of a fashion show is where the magic happens. Hidden from view, models are transformed from gawky 19-year-olds into the living embodiment of a luxury brand’s vision via the judicious application of make-up and wigs.

The Gucci show in Milan on Wednesday took an unexpected turn, then, by positioning its backstage area on a revolving curtained platform in the middle of the catwalk. Dry ice filled the room, the curtain raised and the key players were revealed: models in their white dressing gowns, make-up artists, hair stylists and dressers, brushing hair, applying lipstick, pulling up socks and arranging hat brims just so. The soundtrack, Ravel’s Bolero, lent a balletic air to the calm, methodical work.

“I wanted to show what happens on the other side,” said creative director Alessandro Michele after his show. “Fashion is not only about garments, about clothing. That is only part of the story. I wanted to say that fashion is a complex mechanism. It is also a ritual. Something sacred, liturgical, almost like a religion.”

Michele has been an industry sensation since 2015, when he radically transformed Gucci, then a fading icon of glossy noughties glamour, into a purveyor of quirky, eccentric maximalist chic. His shows present a disparate cast of characters, who appear to have been beamed in from the world’s most comprehensive and luxurious thrift shop. This season’s stand-out looks included full-skirted, Tudor-style dresses styled with bondage harnesses and high-shine neck cuffs, and black velvet dresses with Puritan collars. There was a childlike air to some of the collection – socks pulled up to the knee, a buttercup yellow knee-length dress with a Peter Pan collar.

Michele said he had been thinking about his childhood a lot, and collecting vintage children’s clothing from the second world war, and from the 1970s, which he found inspiring “in the perfection of its proportions and its freedom. Children don’t have to justify what they do or what they wear.” There were crucifixes too, which Michele said tied into the ritualistic nature of fashion and attending a fashion show, “a symbol of belonging, of loyalty to something”.

In its celebration of difference and individuality the Michele era at Gucci aims to distill the aspirations for a certain type of open-minded, urban, millennial consumer, with whom it has had a large amount of success. Brand ambassadors include Harry Styles, who wore a Gucci suit with pearl necklace and, later, a Gucci lace jumpsuit to the Brit awards on Tuesday night.

A number of incidents have undermined that inclusive vision, however, notably the backlash around a polo-neck jumper that looked offensively like blackface, and had to be removed from shops last February. Afterwards the brand apologised and appointed a diversity chief.

Gucci accounts for 80% of parent company Kering’s sales. Its sales are still rising – up by 10.7% to €2.37bn in the third quarter of 2019 – but no longer as meteorically as during Michele’s first couple of years. It is also among the many luxury brands impacted by the coronavirus outbreak.

The Kering CEO, Francois-Henri Pinault, recently warned investors to expect a dip: “Our environment has changed significantly with the coronavirus outbreak. Due to the evolving nature of the situation, it is impossible at this time to fully evaluate the impact on business and how fast it will recover.”