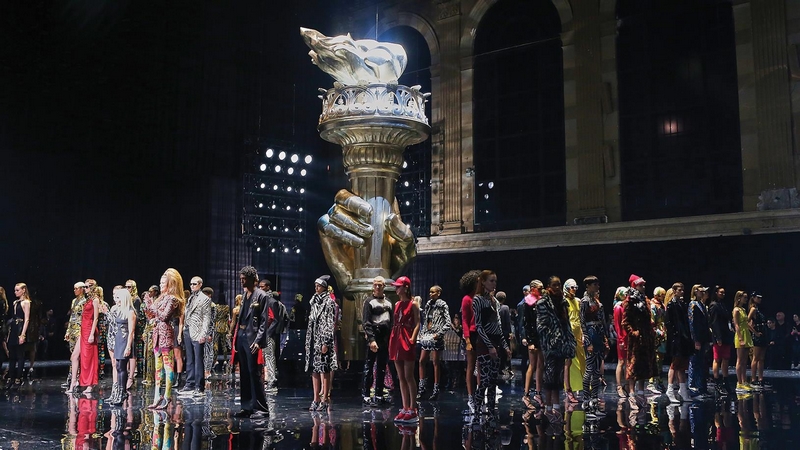 Stars, stripes and Barocco at the Versace Pre/Fall 2019 runway show at the New York Stock Exchange.

This article titled “Versace harks back to greatest hits with savvy New York show” was written by Scarlett Conlon in New York, for The Guardian on Monday 3rd December 2018 13.46 UTC

When Versace promised to take New York by storm this weekend, it probably didn’t mean it quite so literally. As rain and wind swept through Manhattan on Sunday evening, the brand staged its first ever show in the city at the Stock Exchange to celebrate its new status as an US-owned fashion house.

Three months after Versace announced it had sold the company to Capri Holdings (formerly Michael Kors Holdings) for £1.64bn, Donatella Versace – who retained shares and creative control – was Stateside to “pay homage to this incredible city”. Speaking just before the show, she said she wanted to “take the sartorial heritage of Milan and [fuse] it with the energy of New York”. She delivered on her promise.

As models circled a giant gold statue of the Statue of Liberty’s torch – a “symbol of New York and female strength”, the designer said – the classic baroque-inspired Versace chain print was juxtaposed with stars and stripes on skin-tight catsuits, micro minidresses and power suits, bringing together one of the house’s emblems with that of the US.

Elsewhere, the “I heart NY” T-shirt was reimagined with a signature gold Medusa head transfer, and candy-coloured patent minidresses were worn with sneakers rather than sky-high heels. “It’s about attitude; you put trainers on with a miniskirt and it’s not sexy anymore, just cool,” Versace said.

She has been intent on keeping the memory of her brother Gianni Versace alive since he was murdered in 1997, and the links back to the 40-year-old brand’s greatest hits were just as palpable on a different continent. Held on what would have been his 72nd birthday, the show featured an update of his black dress held together by large Medusa-head embossed safety pins and which was worn by Elizabeth Hurley to the 1994 premiere of Four Weddings and a Funeral.

Similarly, in a nod to the creative partnership she shared with him, Donatella Versace recreated the sheer green dress that she designed for Jennifer Lopez to wear to the 2000 Grammys and which inspired the creation of Google Images after it became the most popular search on Google at the time.

For next season, the fabric is printed in hearts inspired by the Jim Dine artwork housed in the New York home Versace shared with her late brother. “This is dedicated to the memory we have here … there’s a lot of emotion tonight.”

The accessories on show were especially significant as John Idol, the chief executive of Capri Holdings which also owns Jimmy Choo, has made clear his plan to significantly increase men’s and women’s accessories and footwear from 35% to 60% of revenues.

As such, nearly every model carried a bag, ranging from small bumbags to social media friendly branded carry-on trunks. The Medusa-head hairclips, bracelets, brooches, heart earrings and body chains looked like the vintage Versace pieces that collectors scramble to get their hands on.

Being a pre-autumn/winter show – the more commercial collections which fall in between the traditional seasons and can make up to 70% of some brands’ sales – it was especially savvy to focus on those accessible items that offer new customers an entry point to the brand.

Star appeal was on hand to welcome the brand to the States. Lupita Nyong’o, 2 Chainz, Kim Kardashian and Kanye West were all sitting front row, while Gigi Hadid, Emily Ratajkowski and Amber Valletta were among the familiar faces to walk the runway.

The symbolism behind the decision to hold the show in a financial institution like the New York Stock Exchange was not lost. At the time of the acquisition, Idol said that part of the appeal of acquiring Versace was because, despite being well-known, the brand was “very underdeveloped” and his plan was to increase annual revenues to more than $2bn (£1.57bn). As well as a focus on entry-level items such as accessories, his strategy involves expanding the brand’s global portfolio of stores from 200 to 300 and speeding up its e-commerce and omnichannel environments.

Symbolism aside, this was a poignant celebration of Versace as it starts its next chapter under new owners, and no downpour was going to rain on that parade.