The Dior men’s Pre-Fall 2019 collection has just received a rapturous reception upon its premiere in Tokyo. With his sights firmly fixed on the future, and influenced by a collaboration with the artist Hajime Sorayama, the menswear Creative Director,  Kim Jones, sent out a lineup that interwove House codes with a stunning spirit of innovative invention. 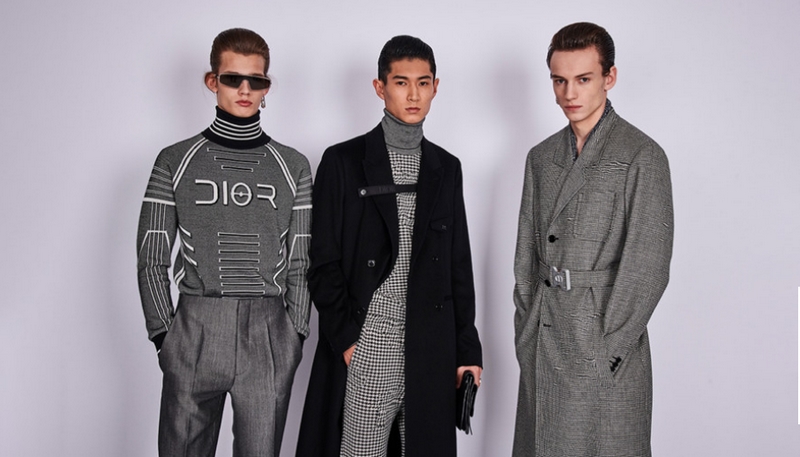 This article titled “Lasers and metallic blazers at Dior menswear debut in Tokyo” was written by Scarlett Conlon, for The Guardian on Friday 30th November 2018 16.58 UTC

Fashion fever hit Tokyo this week as Kate Moss and David Beckham were among the celebrities to sit front row at Dior’s first ever menswear show in the Japanese capital.

The British designer Kim Jones is the person to thank for the brand’s foray outside Paris. Since his appointment as artistic director in March, he has been eager to connect the brand’s aesthetic to that of its eponymous founder, and Tokyo is a place where they find common ground.

“I love Japan, I’ve been here more than 100 times,” Jones said backstage. Christian Dior used to visit the country in the 1950s and used pattern cutters at the famous Daimaru department store as early as 1953. “This is all about appreciating the culture of Japan and respecting it ,” Jones said.

Formerly the creative director at Louis Vuitton, Jones is determined to keep the brand’s founder at the heart of this first-ever pre-autumn/winter collection. So he brought leopard and cherry-blossom prints back from the archive, as well as houndstooth – “which was one of Mr Dior’s favourite fabrics”.

Traditional techniques mixed with advanced technologies: metallic-printed calfskin was laser-etched on to bomber jackets, while blazers were treated with metallisation.

Other highlights that might prove popular were the compact pockets designed to strap on to existing bags and the metallic baseball caps created by the milliner Stephen Jones.

It was about updating Dior’s romantic ode into a “hypermodern reality of Japanese culture today”, read the show notes. To reinforce the point, Jones commissioned the contemporary artist Hajime Sorayama to create a 12ft sculptural centrepiece of a female figure made from silver Mylar for the catwalk.

When he made his debut in June, Jones was only three months into his role and called the collection, which goes on sale in the UK next week, “a good start”. Five months later and he has hit his stride, revealing that he has already completed his third collection. “We’re moving on to number four when we get back [to Paris]. We’re organised,” Jones said.

History would advise that his confidence should not be underestimated. Jones’s adeptness at forecasting what men want to wear is what sets the 39-year-old designer apart. He is the man who nearly single-handedly set the menswear trajectory on a streetwear path, after graduating from Central Saint Martins in 2002..

Moving on from his own line to head up Dunhill and Louis Vuitton, Jones was responsible for the latter’s agenda-setting collaboration with the skatewear brand Supreme and has supported influential tastemakers such as Kanye West and Virgil Abloh along the way.

Jones has evolved his aesthetic towards a more elegant direction because of a desire to “respect the codes” of Dior. Where Jones goes, others follow, which may mean the end of menswear athleisure may be nigh. “I just go around with my eyes open,” he says. “My friends’ name for me is Safari Eyes because I can see things from a distance that other people can’t.”