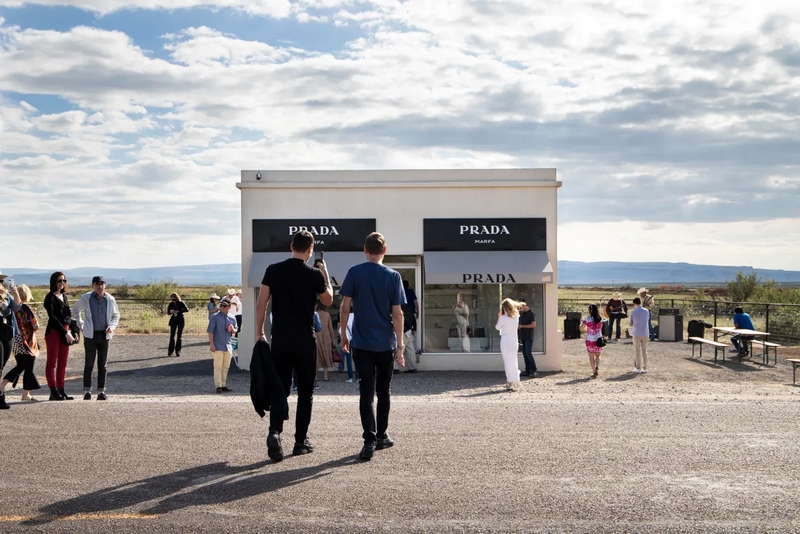 When the Scandinavian artists Michael Elmgreen and Ingar Dragset erected Prada Marfa, a sculptural, non-functioning replica of a luxury Prada boutique, on the edge of a lonely west Texas highway, they imagined that it would end up like the remote Land Art of the 60s and 70s. In the absence of modern social media, it would quietly erode into the landscape before anyone ever really got a chance to see it.

“It would exist more as documentation and a rumor,” Dragset recalled, “and at some point just disappear.”

But rather than fade away, Prada Marfa defied the artists’ expectations, mutating into a cultural sensation over the years. It appeared on The Simpsons and in Beyoncé’s Instagram feed, having attracted countless other social media influencers. It has weathered the elements, a legal threat, and repeated acts of vandalism.

Recently, when the Berlin-based artists returned to the site for the first time in nearly 15 years, they found a sculpture that had taken on a life of its own.

“It became a symbol beyond our expectations, or individual ideas, in good ways and bad,” said Elmgreen during the recent visit, bringing to light the friction between the public and public art, artistic intention and outcome. For Dragset, Prada Marfa had become a lens to view the passage of time, “changes in how we use technology to perceive a site, or an experience”, he said, particularly in terms of selfie culture. “Nothing is worth anything unless you have your face in front of it.”

Following 14 years of estrangement, the artists returned to Prada Marfa on the occasion of their first US survey, Elmgreen & Dragset: Sculptures, at the Nasher Sculpture Center in Dallas. The exhibition surveys a partnership that has, since 1995, produced social satire in the form of high-production, prefabricated sculpture and installation.

Prada Marfa was a response to the high-priced commercialism that was quietly gentrifying cities amid the 90s neoliberal economic boom. The artists staged its precursor in New York in 2001, when, as expensive designer shops priced art dealers out of SoHo, they mounted an exhibition with the words “OPENING SOON, PRADA” printed on a Chelsea gallery’s storefront window. (With little else on view, collectors believed the gallery had really closed, and the owner was not amused.)

“This architectural entity of a luxury boutique had suddenly become so present in our culture, and we were all starting to get used to it,” Elmgreen said. Putting a luxury boutique in the desert, they thought, would render this invisible force visible. With the help of two commissioning art organizations, Art Production Fund and Ballroom Marfa, the artists found a rancher based in the 200-person town of Valentine, Texas, who was willing to donate a parcel of land to the project. They named it after the nearby town of Marfa, known in the art world for being the onetime home of the late minimalist legend Donald Judd. The venue was perfect, according to Elmgreen, since “luxury brands that were using minimalism to make their interiors look more tasteful and intellectual were indebted to Judd’s work”.

On 1 October 2005, Elmgreen & Dragset inaugurated a 15ft-wide white building made of adobe brick, designed with the help of the architects Ronald Rael and Virginia San Fratello. Like a real boutique, it featured the Prada logos on two big black signs and two awnings on the facade, and, visible through the glass storefront, rows of shoes sat single-file on illuminated shelves. (Despite the work’s critique of her brand, a delighted Miuccia Prada donated shoes and purses from her autumn/winter 2005 collection.)

Vandals struck almost immediately. Within days, they spray-painted the side of the building and ripped out its non-functioning door, making off with all its merchandise: several very expensive purses and more than a dozen worthless, right-foot-only shoes.

“All parties realized that if the structure were allowed to fully decay, it would become both a hazard and an eyesore,” says Ballroom Marfa’s website, and so they got new shoes, painted over the graffiti, and replaced the glass storefront with shatterproof acrylic. To this day, contrary to the artist’s original intent, Ballroom Marfa and Art Production Fund continue to finance its maintenance, “out of respect to the residents of Valentine”. (In a county where the median income sits at $46,534 and public schools lack proper funding, the organizations declined to share how much they spend on the sculpture’s maintenance.)

During their opening at the Nasher in mid-September, Elmgreen & Dragset conceded to having “underestimated” public reaction. But as visitors admired their high-sheen works from a respectful distance inside inert, climate-controlled galleries, the artists made an important point: museums are where art goes to die, while public art takes on a life of its own.

Installed outside museum walls, public art is not only exposed to the elements but also to “an audience that didn’t ask for an art experience”, Elmgreen said. “When people interact with [public art], even vandalism can be seen as a positive – it’s a sign of people feeling that they have a say in public space.”

The last 14 years unfolded with a series of unforeseeable events, beginning with the advent of social media and Airbnb. The monumental art collections of Marfa, and by extension Prada Marfa, suddenly became booming mainstream destinations. In 2013, when the Texas department of transportation threatened Prada Marfa’s removal after deeming it a piece of illegal roadside advertising, the sculpture won its right to stay after Ballroom Marfa granted it museum status. Vandalism continued, in the form of stuffed drainpipes, bullet holes, cigarette burns in the awnings; in one high-profile 2014 incident, an Austin-based artist was arrested for using the site for his own guerrilla installation, plastering it with blue paint and ads for Toms shoes.

Residents of Valentine have offered mixed reviews: “It was strange at first, but it’s been here so long we’ve gotten used to it,” said Letty, 48, a local librarian who declined to give her last name. Her fellow resident Bob Carr, age 74, called it “a waste of money”. Neither has ever taken a photo there.

But despite its detractors, public affection for Prada Marfa is undeniable. Couples attach love locks to the links of its surrounding fence; unauthorized companies mass-produce road signs to Prada Marfa as bedroom decor. It inspired the tiny, non-functioning roadside attraction Target Marathon, a roadside attraction outside Marathon, Texas. And during a recent road-trip episode of The Simpsons, Homer cemented Prada Marfa’s place in popular culture by urinating on it.

After their opening in Dallas, Elmgreen & Dragset took the one-hour flight to Midland, then boarded a small bus with a few VIP museum patrons. As they went west on Highway 90, a road prone to mirages, Prada Marfa first appeared as a small blip in the distance. The artists stood with excitement before the bus came to a full stop. There across the road was their sculpture, framed by the surreal light and low slung clouds of the desert sky. The stucco walls had been freshly painted, and the interior carpet freshly vacuumed of dead bugs. For both artists, it was a poignant moment.

“It’s almost like being a parent who experienced children growing up and going a direction they never intended,” Elmgreen said.

“After all these years, you come out here and the landscape, the collection, the way the bags are standing, is exactly the same,” Dragset said. “Nothing is ever like that.”